Please ensure Javascript is enabled for purposes of website accessibility
Log In Help Join The Motley Fool
Free Article Join Over 1 Million Premium Members And Get More In-Depth Stock Guidance and Research
By Rich Duprey - Sep 16, 2016 at 8:10AM

Whatever made them think this was a good idea? 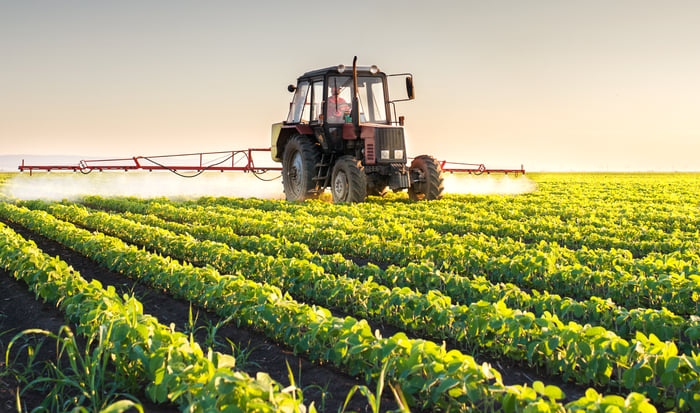 The only surprise in the Justice Department suing Monsanto (MON) to prevent it from selling its Precision Planting business to John Deere (DE -1.96%) was that the two companies thought it would fly in the first place.

Precision Planting owns 42% of the market, while Deere's ExactEmerge controls 44%. Considering the antitrust regulator's history of opposing big mergers that concentrate industries into the hands of just a few companies, consolidating control of 86% of this emerging technology into portfolio of just one company without offering any compensatory action to ameliorate such concerns should have suggested the deal was dead on arrival.

A precise plan to profit

Deere agreed to purchase Precision Planting for $190 million last November and marked the third time in five weeks it had made a deal in the space. The day before announcing the transaction with Monsanto, it had said it was buying European precision planting manufacturer Monosem, and before that had entered into a joint venture with DN2K to form SageInsights, a data management company for agricultural customers.

Precision planting technologies are seen as the future for farmers because the ability to quickly plant seed at the right depth and interval during the short window of opportunity open to them ought to lead to greater crop yields. Although that's the promise, many variables still come into play that ultimately affect the outcome, including the speed at which the planter is driven and how the field to be planted is tilled (or whether it is tilled at all). Driving too fast over certain terrains will also lead to uneven application.

The equipment is also expensive, which depending upon the pricing farmers are receiving for their crops, may make it a non-essential acquisition. The current pricing climate, though, is seen as beneficial to the equipment manufacturers. Corn prices have tumbled from around $7 per bushel to just about $3, and futures are going around $2.80 per bushel. Wheat is at its lowest level in a decade and beneath the cost of production. Improving crop yields at those levels becomes essential.

Yet as the agricultural and construction industries have declined, so have Deere's prospects and it's suffered through multiple quarters of lower sales. While it remains profitable, sales fell 11% in its recently reported third quarter and net profits were off 4%. Earnings are down 22% year to date.

The promise of precision agriculture to turn around its current trajectory is that it would give Deere key control over every aspect of the technology that farmers were buying. Acquiring Monsanto's business was essential because not only did it sell the planters, but also retrofit equipment that could be attached to existing farm equipment, and do so at significantly lower cost. Where a planter could sell for $150,000, the retrofit devices sell for around $30,000 and held the potential to severely undercut Deere's sales further and gain a dominant market position.

For Monsanto, selling the division would let it better focus on big data services through its Climate Corp. unit. The sales agreement gave the biotech exclusive near real-time data connectivity between Deere's farm equipment and its own FieldView platform that it's been busy building out. In its most recent quarterly report, Monsanto said the platform had reached more than 13 million paid acres in in its fiscal year and was on target to hit 25 million paid acres next year. Brazil and regions of Canada will also soon have access to the technology.

While the sale and purchase of Precision Planting would be good for both Monsanto and John Deere, the Justice Department said it would be bad for farmers because it would stifle the innovation and price competition that have been the hallmark of the industry thus far. It alleges allowing Deere to buy the business would "allow it to control nearly every method through which American farmers can acquire effective high-speed precision planting systems and provide it with the ability to set prices, output, quality and product features without the constraints of market competition."

Both companies have said they'll fight the lawsuit, and it may be that because precision planting is still an emerging technology even by the Justice Department's standards, and not essential to a farmer's livelihood, they thought they would be able to pass regulatory scrutiny. But with the lawsuit filed, they'll need to show why giving one company a virtual monopoly in the industry is a good idea.