Please ensure Javascript is enabled for purposes of website accessibility
Log In Help Join The Motley Fool
Free Article Join Over 1 Million Premium Members And Get More In-Depth Stock Guidance and Research
By Adam Levy – Sep 16, 2016 at 10:02AM 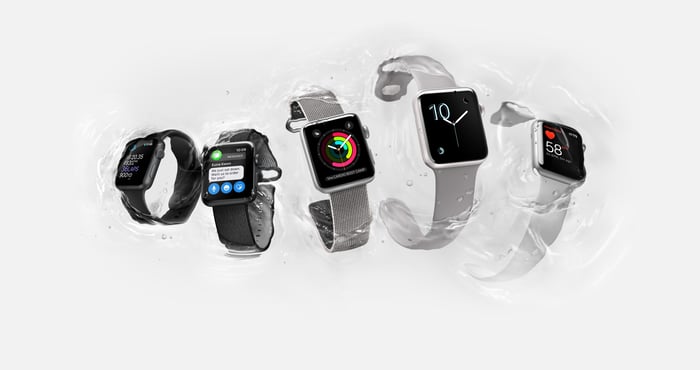 The iPhone isn't the only device Apple (AAPL -0.41%) gave a refresh last week. The Cupertino, California-based company unveiled a new version of the Apple Watch as well. And while the outside might look similar to the original, the company completely updated the guts with a faster processor and GPS chip, and it's now water-resistant to 50 meters. The new device is called the Apple Watch Series 2.

Most of the updates are designed to appeal to fitness enthusiasts to track their various activities, the same market Fitbit (FIT) has dominated with its lower-cost wearables. In fact, Fitbit-like devices have shown more staying power as low-end devices that simply track activities grew unit sales 49% in the second quarter, according to IDC. Comparatively, watches supporting third-party applications -- like the Apple Watch -- saw unit sales decline 27% year over year.

Surely, part of that decline came from lapping the very successful launch of the original Apple Watch, but it points to the inability for Apple to forge a new product category like it did with the iPhone or iPad.

The Apple Watch is a catchall fitness tracker

Although the Apple Watch supports third-party apps, Apple largely focused on the health features of the Series 2 during its presentation. It even partnered with Nike to make a special edition of the device for runners. But new hardware updates like GPS and water resistance are already available in competing devices that retail for less, like the Garmin vivoactive HR.

The Apple Watch is able to track all sorts of fitness activities, but rarely does an athlete need such versatility. Someone interested in tracking their swim workouts is rarely also interested in improving their tennis game.

And much of the functionality that Apple touted during its announcement doesn't take full advantage of the new processor inside the device. Third-party support for the Apple Watch isn't exactly lacking, it's simply uninspired. And Apple's native apps aren't any better.

Until Apple (or someone) develops a more unique use case for high-powered smartwatches, it will remain a niche product.

But will sales turn around?

Unit sales should rebound slightly as pent-up demand from the first half of the year goes toward the new versions of the Apple Watch. There is the Series 2 and also a more powerful Series 1. Apple decided to update the original Apple Watch with the same processor found in the Series 2. That original device -- dubbed the Series 1 -- may attract a lot of the unit sales at its new lower price of $269.

That pricing is more in line with the Fitbit Blaze, which offers similar functionality for $199. Fitbit sold 1 million of those devices in its first month of sales. Unlike the Apple Watch, it doesn't support third-party apps, but it does sport a five-day battery life compared to Apple's 18-hour rating.

Apple may be able to grab an even higher share of the high-end smartwatch market with the release of the Series 2. It took 47% of that market in the second quarter even without a product refresh, according to IDC. That market, however, is only 15% of the size of the total wearable market.

The Apple Watch will need to expand the market to meaningfully grow sales to a level that truly impacts Apple's bottom line. The most recent update doesn't look like it will be able to do that even if it marginally boosts its sales back to levels it saw from its original product launch.