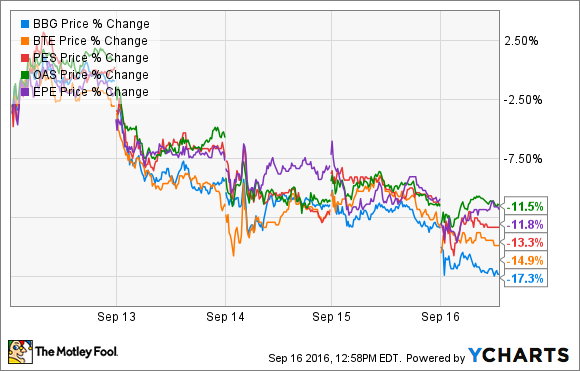 With a market cap just over $200 million, oil-field service company Pioneer Energy Services is the smallest in the group. Its tiny size puts it at a distinct disadvantage in the currently weak oil market, because it does not have the diversification or scale of its larger rivals. That is having a clear impact on its financials, with its trailing-twelve-month revenue and earnings down 66.9% and 82.3%, respectively, from the peak in 2014. Because of the impact low oil prices are having on its business, Pioneer Energy Services' stock price tends to be very volatile when crude prices move lower, because of the implication that its financial results will not improve anytime soon.

Meanwhile, producers Bill Barrett, Baytex Energy, and EP Energy have three things in common. Each has a market cap of less than a billion dollars, elevated debt levels, and less-than-ideal resource positions for the current low-oil-price environment. Because of these factors, these three stocks tend to be very volatile when oil prices slump. That is because persistently low oil prices over the long term will mute growth, as they have neither the financial resources nor the natural-resource base to thrive under those conditions.

While Oasis Petroleum has similar issues, it does have something its smaller rivals lack, which is a prime position in the Bakken shale. Further, the company made a move this week to strengthen its balance sheet by offering $250 million of senior convertible notes. Oasis plans to use that cash for general corporate purposes, as well as to redeem or repurchase some of its other senior notes. While the combination of slumping oil prices and that debt offering weighed on its stock this week, it is in a much better position to grow going forward than Bill Barrett, Baytex Energy, or EP Energy, because its prime position in the Bakken is still lucrative to drill at current prices.

Renewed fears that the oil market is not improving as quickly as expected are bad news for small-cap oil companies. They simply don't have the scale or the resources to compete if the current environment continues to be the norm, which is why their stock prices took the brunt of this week's sell-off. Investors considering oil stocks should focus on larger companies with the ability not only to survive the current environment, but to thrive even if conditions don't get much better.