An increasing number of investors are looking at more than just financial statements to pick investments. Should you join the growing crowd looking to do well by doing good? 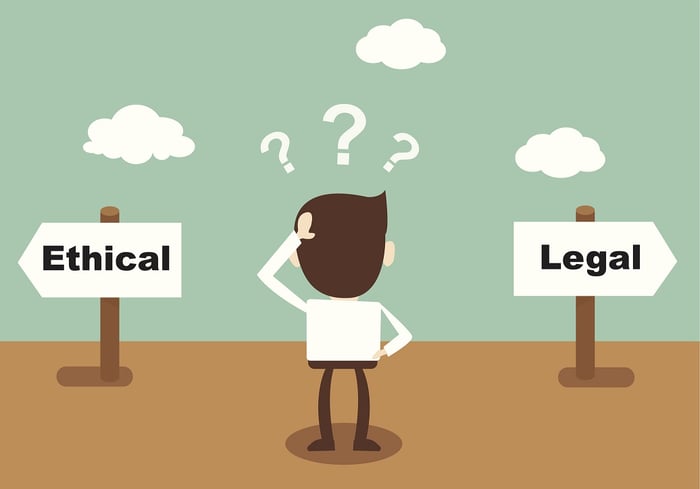 One of the hottest trends in asset management today is socially responsible investing, sometimes referred to as ethical investing. Socially responsible funds, which include 150 mutual funds and index funds, managed more than $135 billion in assets early in 2016. Some managers, most notably, Trillium, specialize in this strategy.

What's popular isn't necessarily what's good for your portfolio, however.

What is socially responsible investing?

The definition of socially responsible investing depends largely on who you ask, though the strategy is perhaps best defined by what it excludes rather than what it includes. The category's largest funds avoid investments in particular industries that fail tests for social responsibility.

One of the largest and most successful funds in the category, the Parnassus Core Equity Fund (PRBLX -169.60%), specifically avoids companies that generate a significant portion of their revenue from alcohol, tobacco, weapons, nuclear power, gambling, fossil fuels, or from operations in the country of Sudan.

Todd Ahlsten, one of two of Parnassus Core Equity Fund's portfolio managers, once said in an interview that selecting which stocks to avoid for reasons of social responsibility is "a judgement call." He explained that the fund won't invest in Coca-Cola because fund management doesn't "think it's necessarily a healthy product for society." Similarly, the fund has avoided investing in Wal-Mart, because it sees the company as "destroying the downtown areas of Middle America." Neither of these companies would otherwise be left out from the fund by less subjective criteria listed in the fund's prospectus, which simply names industries and geographies it generally avoids investing in.

Vanguard's FTSE Social Index Fund (VFTSX) roughly matches the Parnassus fund's omissions, adding adult entertainment as a revenue source that can lead to a company's exclusion from its fund.

Where most such funds aim to avoid particular industries that do not get the green light for social responsibility, other smaller funds make a concentrated effort to invest in companies that exhibit particular ideologies or characteristics.

The recently launched SDPR SSGA Gender Diversity Index ETF specifically invests in companies with a high ratio of women to men at the executive level, giving extra weight to gender diversity on boards of directors. The fund advisor even goes so far to state that it intends to make charitable contributions to organizations that "seek to enhance gender equity through educational efforts," noting that these contributions will be benchmarked to the size of the fund.

In an interview with the New York Times, Kristi Mitchem, head of the Americas institutional client group at State Street, said that the company believes that "the signal has excess return," suggesting that companies with a greater percentage of women in leadership roles would outperform companies that do not. The fund's marketing materials make references to Europe, noting that several European countries have passed legislation that requires 30% to 40% of corporate board members to be female. In the United States, just 19.2% of board seats in S&P 500 companies are held by women. The ETF hopes that "by investing in companies with gender-diverse senior leadership, SHE may inspire conversation and action to increase gender diversity in company leadership teams," according to marketing materials.

Costco, frequently heralded for its generous compensation packages for even the lowest-level retail employees, was for a long time the No. 3 distributor of tobacco products. Costco is therefore a leader on socially responsible wages, but it participates tangentially in a business (tobacco) that many see as unfit for a socially responsible fund.

The Parnassus fund owns shares of National Oilwell Varco, a major supplier of services and equipment to the oil and gas industries, despite the fact the fund otherwise tries to avoid companies with fossil fuel connections. Admittedly, one could argue that National Oilwell Varco's products attempt to make the industry safer and cleaner, a fair point.

Funds can also take very different stances on the same company. Microsoft, which doesn't appear in Parnassus' fund because of its "competitive dynamics," according to an interview, is the second-largest holding in Vanguard's FTSE Social Index Fund.

Why invest in socially responsible funds?

Investors may take comfort in knowing that their investment returns aren't a result of addictive products like tobacco, or diabetes-causing sodas. Other controversial investments include publicly traded private prisons, which generate more revenue and profits when more people are incarcerated, a reality that may conflict with an investor's moral compass.

There is a case to be made that limiting a fund's potential investment universe could negatively affect returns. Cigarettes and other tobacco products are a public health disaster, but a capitalist's dream. The tobacco industry produced the best stock market returns of any industry over a period spanning from 1900 to 2010.

Studies have shown that some of the strategy's cornerstones have merit. Companies whose executives make frequent personal use of carbon-spewing corporate planes underperform others. Another study found that high employee satisfaction was correlated with higher stock market returns over a 27-year period. And while nuclear power may or may not be good for humanity at large, what cannot be debated is the fact that utility stocks broadly underperformed the market average from 1927 to 2011, with greater volatility in investment returns, suggesting that portfolios that have avoided utilities -- for socially responsibility reasons or otherwise -- have outperformed by avoiding an underperforming sector of the stock market.

Of course, like any investment strategy or fund type, actual results for socially responsible funds have been mixed. The reality is that more than half of all stock market funds by assets under management will necessarily underperform the average, while only a minority of assets will outperform, due in large part to the fact that the average fund's performance is reduced by fees whereas the stock market average return is not. The Parnassus Core Equity Fund trounced the returns of the S&P 500 over the last 15 years, with an annualized return of 9% compared to the index's 6.4%. Vanguard's index fund has so far been a laggard, returning an average of one percentage point less than the S&P 500 over the last 15 years.

Smart investors exist on both sides of the dividing line, and whether or not it makes sense to invest with socially responsible guidelines in mind is ultimately a personal decision. But with 150 dedicated socially responsible funds on the market in 2016, it's becoming increasingly clear that the strategy's principles are very much here to stay.