Though shares of Ambarella (NASDAQ:AMBA) are down a modest 4% from this time last year as of this writing, it seems an understatement to say investors in the video chip processing specialist have endured quite the roller coaster ride over that period.

Ambarella's 52-week low set in February, for example, marked a harrowing 53% plunge in less than five months. But for investors willing to weather that short-term difficulty -- or, better yet, take advantage by purchasing shares after the plunge -- Ambarella stock has more than doubled from those lows: 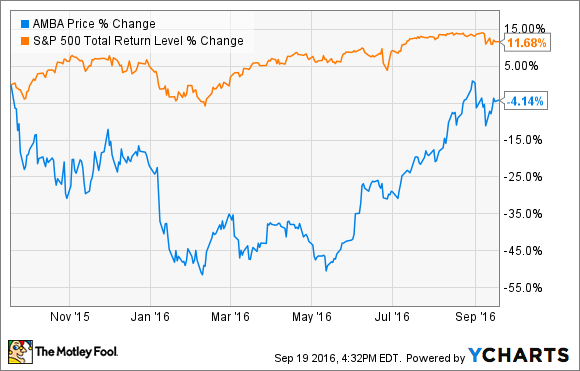 So what was behind the volatility? Regarding the drop early this year, Ambarella can partly blame the broader market's historically painful start to 2016, which dragged down many other high-flying tech stocks in the process. But more than anything, Ambarella's troubles this year have stemmed from headwinds in what has clearly stood out as its "worst" segment in 2016 so far: wearable camera chips.

It didn't help that wearables previously accounted for as much as 30% of Ambarella's total revenue, with the majority of that figure coming from wearable-camera leader GoPro (NASDAQ:GPRO). Just over a year ago, however, Ambarella shares began to plunge after management blamed weakness in the wearables space for underwhelming quarterly guidance. By early this year, the company had stated that demand from GoPro fell to the low-single-digit range as a percentage of total sales.

And though Ambarella found relative strength with solid demand and design win activity from its smaller supplemental markets such as IP security, drones, and automotive, weakness in wearables repeatedly held back Ambarella's overall results in each successive quarter since then.

A turning point came with Ambarella's quarterly report in June, however, when the company exceeded the market's low expectations despite what management described as "near-term headwinds" continuing in wearables. During the subsequent conference call, investors grew excited as Ambarella CFO George Laplante noted, "[W]e continue to see a recovery of the wearable market, so this will most likely be seen in the second half of the year."

Then most recently, after Ambarella reported another strong quarterly beat earlier this month, management confirmed that the company expects to return to year-over-year revenue growth as wearables sustain that momentum into the lucrative 2016 holiday quarter -- a positive development that should be reinforced by GoPro's launch of its new HERO 5 Black and HERO 5 Session cameras earlier this week.

That is, of course, assuming Ambarella's high-quality chips haven't lost their place in GoPro's devices as some investors have feared in recent months.

Recall that earlier this year, I argued that competition was Ambarella's single greatest threat in today's fast-changing world of technology. But we should also keep in mind that Ambarella management has made a habit of updating investors each quarter with the current state of competition in its niche. And with no significant changes noted in any recent quarters -- apart from Ambarella management's admission that it's aware that competitors such as Qualcomm (NASDAQ:QCOM) have been trying (to no avail) to woo their customers -- it seems unlikely Ambarella management would feel comfortable enough to call for the aforementioned return to year-over-year growth this year if its products were losing ground to the competition.

So in the end, even though the wearables market is a shoo-in for Ambarella's weakest segment so far in 2016, the year is still young. And I won't be the least bit surprised if this designation goes to a different segment altogether when 2016 is said and done.