On Monday, GoPro (GPRO -1.80%) fulfilled what its founder and CEO Nick Wood promised would be the "largest introduction of products in our history," unveiling its long awaited Karma drone, two new HERO 5 cameras, a cloud-based subscription service, and promising new editing apps.

Curiously, however, after GoPro stock jumped more than 9% during the announcement early in the day, it gave up those early gains to close up just over 2% Monday. Then on Tuesday, shares followed by plunging nearly 7%. So what gives?

First, keep in mind that shares of GoPro are still up more than 60% since touching their 52-week low in May, when the company's stronger-than-expected first-quarter revenue was overshadowed by its decision to delay the release of Karma to fine-tune its differentiating features. To be fair, GoPro stock is also still down more than 20% year to date in 2016, significantly underperforming the broader market's modest gains: 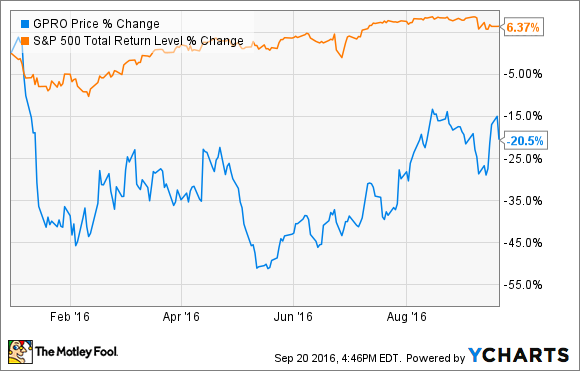 More than anything, Tuesday's decline appears to be a result of short-term investors who were taking advantage of the recent rise by selling into strength created by the excitement of new products.

Speaking of which, some are undoubtedly concerned that while GoPro markets Karma as "much more than a drone," it lacks key several key features for which many drone enthusiasts had hoped.

Sure, Karma has a low physical profile, including folding propeller arms and landing gear that allow it to squeeze into the molded interior of an included backpack, as well as a game-style joystick with a touchscreen display. It also comes with an exceptional stabilizer that can be removed and mounted to Karma Grip (also included), a handheld stick that can be mounted to the backpack for world-class stabilized video from a first-person point of view.

At the same time, as fellow Fool Travis Hoium pointed out in his overview of the "good enough" drone, Karma won't include object avoidance or "follow-me" functionality. The latter, in particular, would enable it to follow a subject such as a skier or bike rider and is already employed by many other high-end drones. During the subsequent conference call, however, Woodman did leave the door open to including follow-me in the future, explaining that GoPro believes the current technology simply isn't up to par with the experience many users demand. For now, Karma includes a feature they call auto shot paths, enabling users to choose from a number of pre-set patterns for semi-antonymous flight.

Next, GoPro didn't discuss the seemingly amazing audio processing abilities that several teaser videos indicated it might have, namely the ability to filter out the annoying buzzing rotor sounds in videos taken with other drones. But the lack of this "feature" isn't apparent just yet; GoPro stated that its new HERO 5 Black camera will contain three separate microphones, with the system capable of "cherry picking" the best sound from each and combining it in the final video. So only time will tell if this achieves the stunning audio effect we saw in the teasers.

Meanwhile, investors are equally worried over the potential effects of the pricing structure of GoPro's new camera lineup. More specifically, GoPro's camera line going forward will continue to follow a "good, better, best" model, with the HERO4 Session maintaining its price at $199, followed by the new HERO5 Session at $299, and the new HERO5 Black at $399, respectively.

For perspective, GoPro's previous lineup was narrowed to the HERO4 Session at $199, the HERO4 Silver at $399, and the HERO4 Black at $499. So the initial fear is that by reducing the price of its high-end camera by $100, to $399, GoPro could be sacrificing margins as it chases greater sales volumes. What's more, recall that GoPro initially botched the launch of the HERO4 Session by pricing it too high at $399, only to reduce its price twice in five months, to $199. So there exists additional fear that the price of the HERO5 Session is again too aggressive at $299.

But I'm not necessarily convinced that either worrisome scenario will be a problem. First, note that GoPro revealed in its most recent quarterly report that the HERO4 Session was the world's second best-selling camera on a unit basis, behind only the HERO4 Silver. And the Silver, for its part, was the world's best-selling camera in both unit and dollar terms, indicating that the HERO4 Black may not have been pulling its weight, given its higher price point. In addition, by presenting consumers with a freshly upgraded version of the smaller form-factor Session camera at $299, GoPro is making a calculated bet that the HERO5 Session will help offset any margin pressure caused by reducing the price of its top-end model.

In the end, we'll need to wait until next quarter's report to see clearly whether any of these fears turns out to have substance. But if one thing is clear, and for better or worse, it's that GoPro investors will be in for one heck of a wild ride when that clarity arrives.

Steve Symington has no position in any stocks mentioned. The Motley Fool owns shares of and recommends GoPro. We Fools may not all hold the same opinions, but we all believe that considering a diverse range of insights makes us better investors. The Motley Fool has a disclosure policy.