A small device announced at GoPro's product launch event this week could be a key to GoPro's sales this year.

If you watched GoPro's (GPRO -2.48%) Hero 5 and Karma Drone product launch event on Monday, you may have missed arguably the most important product coming into the company's lineup. It isn't a camera or a drone or image stabilization technology. It's a keychain attachment that could make getting videos from your camera to your phone a breeze.

GoPro is great at making cameras and has really improved its video editing software, particularly with the Quik app that makes it incredibly easy to make a great video. But getting data from the camera to a smartphone or tablet has been a problem. Enter Quik Key. 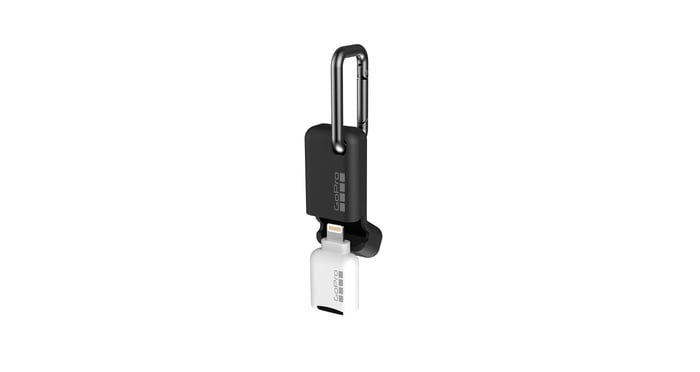 Quik Key isn't big, but its impact on GoPro users could be massive. Image source: GoPro.

The device that makes GoPro a breeze

Quik Key is nothing more than a dongle that allows your microSD card to plug into your Apple iPhone or iPad. It attaches to a keychain or can be used independently with an included carbineer. For now, the product is only Apple compatible, but that could change in the future if it's successful.

The Capture app, which is what smartphone users can use to control a GoPro camera remotely and download media to the smartphone, will be the point of connection to Quick Key data, adding functionality to an app users are probably familiar with. People can download individual images, full videos, or sections of a video. And with the Apple Lightning adapter the data transfer speeds will be a lot faster than a wireless connection.

This may seem like an unnecessary device on the surface -- unless you've tried to view, download, and edit GoPro content in the field. Sitting on a chairlift is a great time to edit some videos from your last run, but it's nearly impossible to do that with a wireless connection. Plus, the battery drains rapidly when the GoPro is sending content to a smartphone.

Taking away the friction of using GoPro

The biggest weakness in GoPro's business over the past two years has been the product line's relatively painful process of turning photos and videos into great, sharable content. At a time when everyone has a camera in their pocket and Instagram and Facebook are only a click away, the process of downloading and editing GoPro content was too painful.

Improved editing apps helped the process, but a quick file-transferring device is a great step in the right direction as well. At $29.99, Quik Key won't be a huge moneymaker, but it could reduce friction consumers feel in buying a GoPro. And that's exactly the point.

With higher quality video content requiring larger data transfers and new products like the Karma Drone now in the lineup, quick data transfer will be key for GoPro users. Don't underestimate just how important Quik Key can be for getting more GoPro cameras in customers' hands and rejuvenating the sales cycle in 2016.