While diversified energy infrastructure giant Williams Companies (NYSE:WMB) and its MLP Williams Partners (NYSE: WPZ) own a multitude of high-quality assets, their crown jewel is the Transco pipeline. Not only does the interstate pipeline supply both companies with a steady stream of cash flow, but it has tremendous growth opportunities ahead of it, which has Williams Companies very excited about its future.

The Transco system is America's largest-volume interstate natural gas pipeline. The mainline extends 1,800 miles from South Texas to New York City and encompasses 10,200 miles of pipeline. At peak capacity, its can supply up to 10.9 billion cubic feet of natural gas per day (roughly 15% of America's average daily natural gas demand) to market centers in the Southwest, Mid-Atlantic, and Northeastern states.

As a regulated gas pipeline, FERC monitors Transco's transmission rates, which caps its earnings. While that still allows Williams to collect a steady supply of demand payments as it transports gas along the system, it cannot raise rates at will. However, that does not mean its earnings on Transco lack upside. Instead, driving its upside are a multitude of expansion projects currently under construction. In fact, because of those projects Transco is by far the biggest growth driver in Williams' portfolio. For example, this year the company will invest $1.3 billion to expand the system, which represents 68% of its capex budget, with that investment increasing to $2.4 billion in 2017 or 77% of its budget. Those projects are part of a multi-year $6.9 billion expansion of the system: 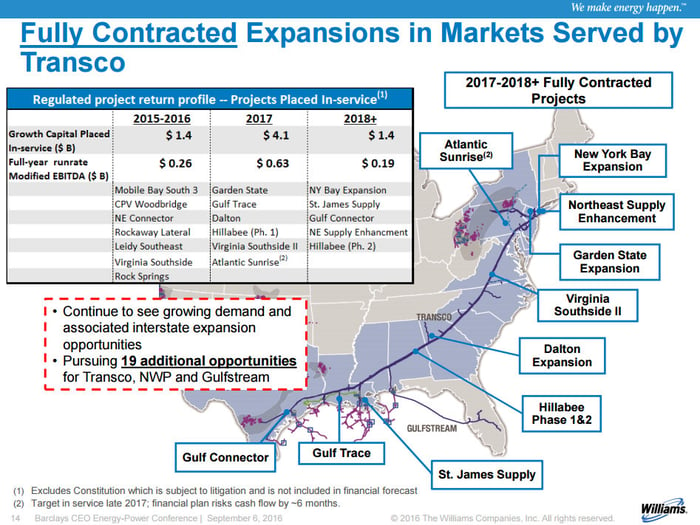 Those expansion projects are already fully contracted, which means they will supply Williams with cash flow on day one. By its projections, it will capture more than $1 billion in modified annual EBITDA by 2018, which is tremendous growth for a company that generated $4.1 billion in EBITDA last year. That growing supply of cash flow is one reason why Williams Companies is confident that it can restart dividend growth in 2018.

Strategically located for the future

In addition to the clearly visible near-term growth, Williams has ample expansion opportunities along the Transco corridor to drive growth well beyond 2018. That is because the strategic location of the system puts it in the position to capture growth from the markets that will drive the bulk of natural gas demand growth over the next decade: 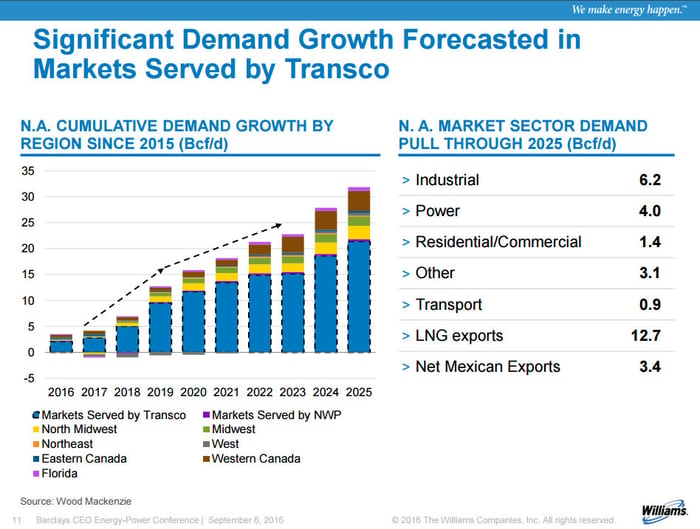 Energy analysts at Wood Mackenzie forecast that natural gas demand will grow to 18 Bcf/d in the Northeast alone by 2025, which is an incremental 3 Bcf/d and as much as the combined growth forecast for the central and western regions of the country. Meanwhile, demand growth in the Southeast is expected to be even stronger at 4 Bcf/d, pushing it up to 16 Bcf/d, which is as much as demand will be in the west.

That said, the biggest driver is the Gulf Coast region where Wood Mackenzie forecasts that demand will grow by a whopping 17 Bcf/d by 2025 pushing demand up to 41 Bcf/d. Driving this demand is a combination of industrial demand from petrochemical facilities as well as exports to both Mexico and the global LNG market. LNG exports, in particular, have already accounted for several expansion projects on Transco. For example, last year the company announced that it signed long-term supply contracts with Cheniere Energy's (NYSEMKT:LNG) Corpus Christi LNG export facility and another LNG export facility in Freeport, Texas on its Gulf Connector project. Before that, Williams signed an agreement with Cheniere Energy's Sabine Pass facility to supply it with gas from Transco via the Gulf Trace project. With several additional LNG export projects under development along the Gulf Coast, Williams should have ample expansion opportunities for Transco in the region over the next decade.

Williams' Transco system is a real jewel. The regulated pipeline supplies the company with a steadily growing stream of cash flow, which it has clear visibility to continue growing for years to come. That growth would not be possible if it were not for the pipeline's strategic location, which enables it to connect gas supplies with the fastest growing market centers.