Even as alternatives grow, the future of energy will continue looking like today for years to come. Image source: Getty Images.

When we asked some of our contributors to talk about the future of energy, it wasn't a surprise when wind turbine manufacturer Vestas Wind Systems (VWDRY -2.85%) came up. But we sure weren't expecting them to write about coal producer Alliance Resource Partners (ARLP -1.11%) or natural gas and oil producer Chesapeake Energy (CHKA.Q). But they did, and for good reason.

These surprisingly bold bets are a reminder that fossil fuels are likely to remain a meaningful source of global energy for years to come, even as renewables like solar and wind continue to grow every year. Keep reading to learn why these three companies could make excellent investments in the future of energy.

Reuben Gregg Brewer: There's a famous skit from a Monty Python movie in which a man brought out to be collected after his "death" wakes up and says, "I'm not dead yet." That sounds a lot like the thermal coal industry, which is struggling mightily as alternative power sources gain traction. But it is, in fact, far from dead. That said, you need to back the right horse, because the problems the industry is facing are very real. The best investment option looks like Alliance Resource Partners. 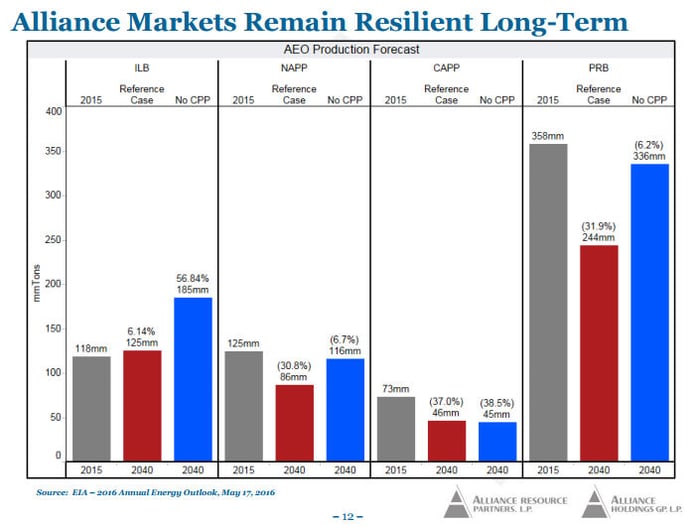 For starters, Alliance operates predominantly in the Illinois Basin (ILB), one of the most desirable coal regions in the United States. In fact, according to the U.S. Energy Information Administration, the ILB is the only coal basin expected to see modest increased demand in its baseline estimates out through 2040. There will be robust growth, however, if currently proposed power regulations aren't implemented. In fact, over the next 15 years or so, coal is expected to supply at least 20% of U.S. power in the absolute worst-case scenario envisioned by the EIA.

So, despite what it may seem like, coal clearly isn't dead, and Alliance operates in a good coal region. But there's also the not-so-subtle fact that Alliance has managed to turn a profit throughout the coal industry's downturn. Peers like Peabody Energy, Arch Coal, and Alpha Natural Resources were all forced into bankruptcy court. That's a big statement to Alliance's staying power, backed up by a conservative approach to the business. For example, after a distribution cut, the company expects to cover its distribution by two times this year -- a huge amount of coverage in the limited partnership space.

Meanwhile, long-term debt was just 20% of its capital structure at the midpoint of the year, with interest expense accounting for only about 1.8% of revenues. In other words, Alliance is in pretty solid financial shape. And while that distribution cut hurt, it will help ensure the partnership survives the downturn in stride so it can benefit from its solid position in one of the most desirable coal regions in the country. If you are willing to take a contrarian look at the future of power, Alliance Resource Partners' roughly 8% distribution yield might be worth a deep dive.

Jason Hall: Investing in Vestas Wind Systems (the lone renewable player in this article) is as much counting on the company avoiding its cyclical struggles going forward as a bet on growth in wind energy production. While the industry has continued to grow -- and will keep growing for many years to come -- it has historically been very cyclical. These ups and downs have been a big problem for Vestas' profits in the past: 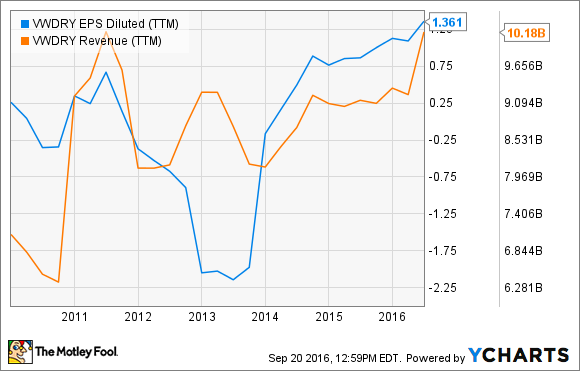 As you can see above, revenues haven't just gone up for Vestas despite strong growth in wind turbine sales over the past decade. Going forward, this cyclical pattern is likely to continue.

What has changed, however, is how Vestas is built to deal with the downturns in the cycle. Over the past several years, the company has made significant changes to its capital structure, reducing its in-house manufacturing capacity, particularly for non-core products can source from third parties. This has positioned the company to have more variable expenses, meaning its costs will decline, creating less drag on the company when market demand slows.

Looking at the long term, this positions Vestas to be a great investment. The company is now built to ride out short-term weakness and take advantage of what will undoubtedly be long-term growth in demand for wind turbines.

This trainwreck of a stock now has potential

But change is happening at Chesapeake Energy, and it might be enough change to merit giving this stock a second look.

Last month, analysts at Barclays Capital -- which had previously been firmly bearish on Chesapeake stock -- revised their assessment to give the company a nod of grudging approval. Based on a series of moves Chesapeake management is making to trade assets for cash, Barclays seems to feel that Chesapeake now has a chance to right the ship -- by casting off ballast.

As Barclays explained, Chesapeake has already unloaded $1.2 billion worth of assets in an effort to raise cash, and it has plans in hand to sell off $2 billion more in assets. It's also moving to exit cash-consuming operations in the Barnett shale, and cancel midstream contracts, with the goal of reducing its rate of cash burn. What's more, these and similar efforts are beginning to pay off.

Already, Chesapeake has reduced the rate at which it burns cash by nearly six times from 2012 levels, shrinking its burn rate from $12 billion to just over $2 billion a year. The planned exit from Barnett promises to reduce burn rates even more -- so much so, in fact, that analysts quoted on S&P Global Market Intelligence believe Chesapeake could actually become (barely) free-cash-flow positive as early as 2018 -- and turn GAAP-profitable as early as 2017.

Still losing money and burning cash today, Chesapeake Energy stock is not an obvious buy by any means. But it does have the potential to become one.

Jason Hall owns shares of Chesapeake Energy and Vestas Wind Systems. Reuben Brewer has no position in any stocks mentioned. Rich Smith has no position in any stocks mentioned. The Motley Fool recommends Alliance Resource Partners. We Fools may not all hold the same opinions, but we all believe that considering a diverse range of insights makes us better investors. The Motley Fool has a disclosure policy.