Though the last few years have been volatile, there seem to be a few bright spots in the apparel industry now. These four stocks look poised to rise above the rest.

The clothing industry has been a challenging space over the last few years, with trends like "athleisure" and technical gear taking off, luxury and high-fashion brands proving volatile, and every company facing the effects of a changing consumer landscape as e-commerce companies make retail increasingly challenging.

Here's a look at the subsegments of the industry, and which companies look best prepared for long-term gains from here.

The activewear market has been the best-performing segment in the clothing industry, and is expected to continue growing at around 4.5% CAGR through 2020, as populations around the world take fitness more seriously and middle-class growth in places like China bodes well for this type of product. Plenty of companies are competing for market share in this growing segment, but two of the biggest -- Nike (NKE 1.29%) and Under Armour (UAA -0.20%) -- look poised for the most growth in the next few years.

Nike has been facing analyst criticism lately for slowing sales and pressure from smaller competitors taking market share in key categories. Still, Nike stock looks to be a good value now for what will likely be continued long-term profit growth. Nike's profit margins have continued to climb, thanks to a growing focus on e-commerce and higher average selling prices; earnings per share are expected to grow 11% in fiscal year 2017 versus 2016. Nike's long-term earnings growth potential makes its stock, at just 20 times forward earnings estimates, look attractive.

Under Armour, while much more expensive than Nike at 50 times forward earnings estimates, continues to look like the best growth story in the category. Under Armour sales have grown more than 20% year over year for each of the last 26 quarters. The company's 2018 profit is expected to be nearly double its 2015 result, and it is continually muscling its way into new segments such as digital fitness tracking and higher-end fashion wear that could help to drive sales and earnings growth for years to come. Additionally, Under Armour's international sales make up just 15% of its total now, but are increasing rapidly -- a good sign that the company has plenty of room to grow in the years ahead.

On the opposite side of the activewear market is the luxury segment. This segment has been hammered in recent years on global growth concerns, as fewer consumers opt to pay high prices for luxury clothes and accessories. One company that stands out for potential renewed growth is Michael Kors Holdings (CPRI 2.35%).

While virtually every company in this segment has struggled in the last few years, the turnaround strategy developed by Michael Kors, so far, seems to show the most promise. Michael Kors continues to focus on its men's business, as well as developing its e-commerce strategy to continue growing sales and regrowing lost profit margin. In another move to expand its business further, Michael Kors recently launched a line of smartwatches and tracking bracelets; it hopes these will satisfy consumers who want to wear professional and luxury jewelry with the benefits of other wearable technology.

Even with a year-to-date price increase that far outpaces its peers, the company's shares still trade at just 10 times next year's estimated earnings, making this a great value play if the renewed strategy is successful; this looks promising, as year-over-year revenue did rise in the recent quarter, even if just slightly. Morgan Stanley analysts agree, and put out a note in mid-September advising to sell shares of Coach in favor of Michael Kors.

American Eagle Outfitters (AEO -2.91%), like other brands focused on teen trends that grew rapidly in the 1990s and early 2000s, has struggled in the last decade to stay relevant through changing consumer trends and a fickle young-consumer base. However American Eagle has been the most adept at updating its business model, and looks to be on track to retool itself into a growth story once more. 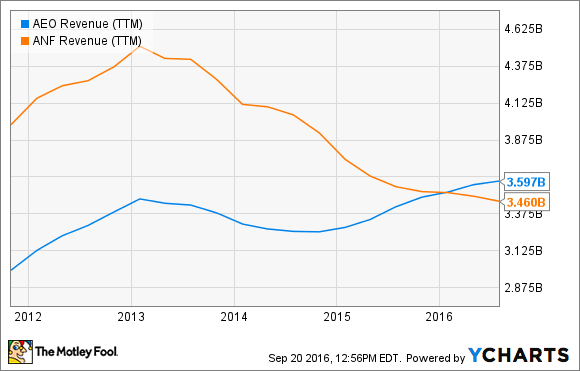 One way American Eagle is doing that is with a women's undergarment line called Aerie, which features ads of "everyday women," with full-sized models and photos that are not altered to remove freckles or other natural marks. The Aerie line is already performing well, taking market share from brands like Victoria's Secret, and providing a bump to American Eagle's total sales.

Thanks to Aerie sales growth, a focus on e-commerce, and a more streamlined and cost-efficient distribution strategy that includes closing non-performing locations, American Eagle posted comparable sales up 3% year over year in the most recent quarter. Compare that to Gap, which posted total comps down 2% year over year during the quarter, and Abercrombie & Fitch, which posted comps down 4%. Average analyst estimates for 2016 are that American Eagle will grow sales 3.5%, and earnings a whopping 17%, over 2015.

For a company like Nike, the rise of e-commerce is an opportunity, and one that the company is taking seriously by growing out its own digital footprint, with new websites and mobile apps for increased online sales.

Retailers without their own clothing brands, on the other hand, have been heavily pressured by the rise of e-commerce, especially with Amazon.com helping to reduce traffic and sales. This doesn't mean there aren't opportunities in this segment, but for companies that focus primarily on retail without products of their own, the path forward in this new digital age certainly looks much harder.