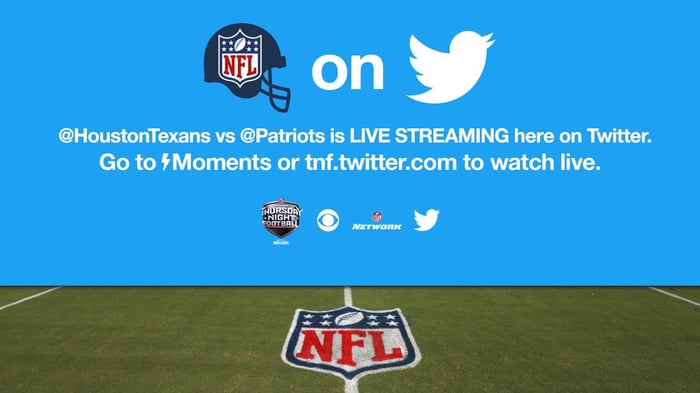 Twitter's (NYSE:TWTR) first live stream of an NFL game has garnered largely positive reviews. The broadcast, which took place last Thursday, was a contest between the Buffalo Bills and the New York Jets.

It was a technical success, with many viewers saying the video (which viewers could watch with an accompanying Twitter feed) was smooth and generally free of glitches. Some did point out that there was a slight lag when compared to the traditional TV broadcast -- it also aired on CBS (NASDAQ:VIAC) and cable's NFL Network -- but not to the point of distraction.

It was the first of 10 Thursday Night Football contests that will air on Twitter; the next is a tussle between the Houston Texans and the New England Patriots. Like the Buffalo/New York game, the remaining games will be available through the company's website and apps, and will not require viewers to have a Twitter account.

The company paid $10 million for the streaming rights to those contests.

It's an exaggeration to say that the game was a make-or-break moment for Twitter, but it certainly comes close. Like an underdog football team, the habitually unprofitable company needs a win. In order to satisfy and maintain the spendthrift advertisers it attracted to the live stream, Twitter's broadcast had to be nearly flawless -- mission accomplished.

The viewership was small compared to that of the more traditional media. All told, around 2.1 million people watched the game via Twitter, averaging out to roughly 243,000 per minute. That's nowhere near the 15.4 million average combined per-minute viewership boasted by CBS and the NFL Network.

But no one should have expected it to compare -- watching a football game through a short-messaging service on a mobile device or PC is still a novelty. It will take time to become a standard means of consuming professional sports.

Meanwhile, NFL on Twitter opens an enticingly lucrative new revenue stream for a company that could use the money. It also gives Twitter a unique advertising platform in the digital realm, and a model for other revenue-generating live stream events. Investors should cheer the success of the broadcast as optimistically as they root for their favorite team.