I'm young enough not to be able to remember much of the internet before Facebook (META 2.53%). I simply remember my internet use consisting of a lot of AOL Instant Messenger, shady peer-to-peer file sharing software, and those sites teenage boys inevitably discover.

But Facebook has completely transformed the way we use the internet. In fact, some people in developing countries don't understand they're using the internet when they access Facebook on their phones.

Facebook has managed to grow well beyond anyone's expectations from a decade ago. It's grown beyond expectations from just four years ago, when the company's IPO was deemed a failure. It's now one of the biggest companies in the world.

Here, then, are 100 facts about Facebook investors should consider.

2. There are about 3 billion internet users worldwide.

3. Facebook has penetrated so much of the existing market of internet users that it's trying to figure out how to make more internet users.

4. It's using things out of science fiction novels such as solar-powered drones, lasers, satellites, rockets, and AI-powered software developed through its Internet.org initiative to provide internet access to more people.

5. The fastest-growing market for internet users is India.

7. India's internet population grew about 40% last year, and it's accelerating.

9. It will soon surpass the U.S. as Facebook's largest market.

10. Facebook's average advertising revenue per user in the Asia-Pacific region, of which India is a part, was just $1.74 last quarter.

12. That $1.74 per user in Asia-Pacific is still more than Twitter's (TWTR) global average ad revenue per user last quarter.

13. If the number of Facebook users in India grows another 40% this year, Facebook will add the equivalent of about one-fifth of Twitter's user base with about the same revenue potential.

20. Facebook CFO Dave Wehner says the company has mostly maxed out the number of ads it can place in users' news feeds.

21. Ad revenue growth will have to come from user growth, improved engagement, and increased ad prices.

22. It's a good thing everyone is addicted to Facebook.

25. Facebook is still extremely popular with millennials. No matter what anyone tries to tell you.

26. The average user between the ages of 18 and 34 spends more time on Facebook-owned social networks than the average time spent on Snapchat, Twitter, Pinterest, Tumblr, LinkedIn, Google+, and Vine combined.

27. Facebook users watched more than 8 billion videos on its platform per day during the third quarter last year.

28. Facebook wants users and brands to "go live" with their video this year.

30. Facebook is paying celebrities and publishers more than $50 million to "go live."

32. Zuckerberg and Co. still haven't really figured out how to monetize all those video views.

34. It added about 100,000 new advertisers per month from October through February.

36. Facebook has 60 million active businesses with pages on its network.

38. Twitter has penetrated only about 1.4% of businesses on its platform.

39. There are an estimated 420 million to 510 million small and medium-sized businesses worldwide.

40. If Facebook could get about half of those businesses to create pages and maintain its penetration rate, it could quadruple its active advertisers.

41. With stable ad loads and relatively modest user growth, the demand for advertisements will cause Facebook's average ad prices to climb.

43. Many of Facebook's existing advertisers are spending more on average this year compared with last year. 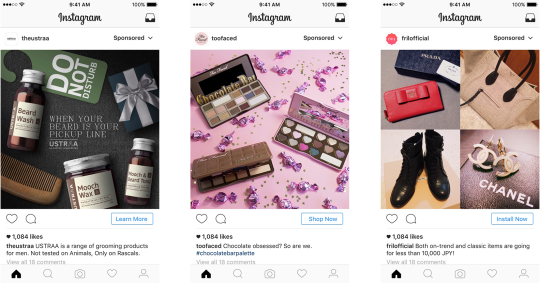 45. It's expected to be more incremental this year, providing an additional avenue for growing spend from advertisers.

48. One of Facebook's biggest money makers are app install ads.

49. Citi estimates that 1.15 billion apps will be downloaded through marketing on Facebook properties this year.

52. That means Facebook will generate nearly $4 billion from app installs this year.

55. Which means Facebook is on pace to generate more revenue from app installs this year than Google's Play Store did last year.

56. There are over 1 billion users on Messenger.

58. There are 50 million business accounts on Messenger.

59. Those business accounts exchange more than 1 billion messages per month with users.

64. Both generate more revenue than either Messenger or WhatsApp.

65. Which will bring in a combined $0 for Facebook this year.

66. WeChat generates more than $7 in revenue per user, according to estimates.

67. The vast majority of WeChat's users are in Asia, where Facebook generated $6.32 per user over the past 12 months across all of its platforms.

67a. Again, none of that came from its messaging apps.

70. Facebook bought WhatsApp for $21.8 billion in cash and stock.

71. It also bought Oculus for $2 billion in cash and stock.

72. The Oculus Rift is seeing "increasing demand from retail as stores plan for the holidays."

73. Zuckerberg says, "Virtual reality has the potential to be the next computing platform that changes all our lives."

74. More than 1 million people already use Oculus on their phones through Samsung Gear VR.

75. Zuckerberg says he doesn't really want to make big acquisitions as he did with Oculus and WhatsApp.

76. But Zuckerberg could soon have a lot of cash to spend if he wants. 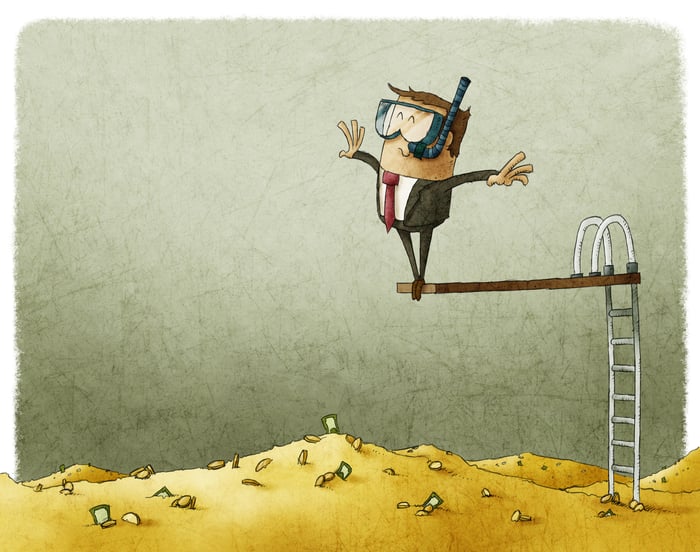 That's supposed to be Mark Zuckerberg diving into a pile of money. Image source: Getty Images.

81. But analysts don't have a very good track record forecasting the long term for Facebook.

85a. Set a reminder now to come back to this article in four years.

86. Facebook currently trades for about 25 times next year's earnings estimate.

87. Alphabet trades for about 19 times next year's earnings estimate.

88. Microsoft trades for about 18 times next year's earnings estimate.

89. Even if Facebook's earnings multiple falls to somewhere between Alphabet's and Microsoft's over the next three years, the stock would still be worth around $180.

89a. That's assuming the analysts have it right this time. 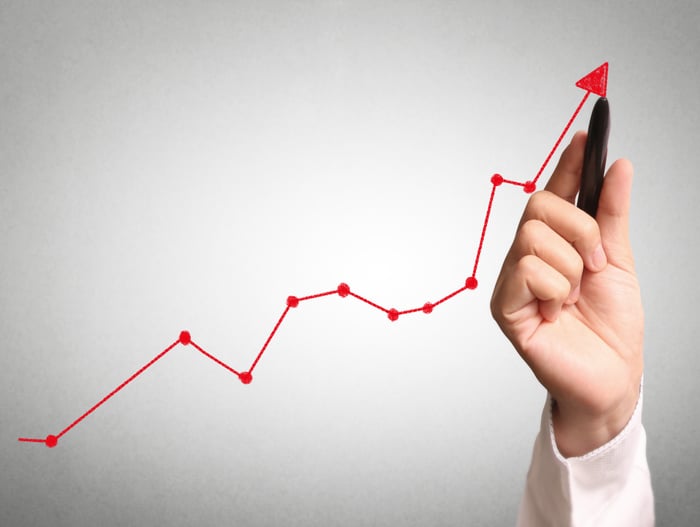 92. That makes him the the fifth wealthiest person in the world, behind Microsoft's Bill Gates, Zara's Amancio Ortega, Berkshire Hathaway's Warren Buffett, and Amazon.com's Jeff Bezos.

94. The next youngest billionaire in the top five is Jeff Bezos (52).

95. If Zuckerberg can increase his wealth 11.7% per year, on average, he'll be a trillionaire before 60.

95b. Also, the idea of a trillionaire is so ridiculous that Microsoft Word is telling me it's a spelling error.

96a. At that pace, Zuckerberg would be a trillionaire in 10 years.

98a. So, projecting that far into the future is a bit dubious.

99. Both Zuckerberg and Gates have pledged to donate the vast majority of their wealth to charity.

100. Now that I'm finished writing this article, I'm looking up ways to qualify myself as a charitable organization.