If you're looking for cheap dividend stocks, these three names should be on your radar.

There aren't a whole lot of compelling bargains these days when it comes to income-generating stocks, but there are a select few flying under the radar at the moment. AbbVie (ABBV 1.03%), Gilead Sciences (GILD -0.19%), and Teva Pharmaceutical Industries (TEVA -1.17%), for instance, are all trading at steep discounts relative to their peers. Here's a brief rundown of what makes these three dividend stocks cheap and why they might be worth buying right now.

AbbVie is a beaten-down Dividend Aristocrat

Since being spun off in 2013, AbbVie has increased its payout by a noteworthy 42% and offers income investors a sizable yield of 3.6% at current levels. However, despite its inclusion in the S&P Dividend Aristocrats Index (which it was grandfathered into, as its former parent company, Abbott Laboratories, is an Aristocrat), AbbVie's shares currently sport one of the lowest forward price-to-earnings ratios among all large-cap biotech stocks at 11.4.

The lowdown is that investors are deeply concerned about AbbVie's ability to overcome the entrance of generic versions, known as biosimilars, of its flagship anti-inflammatory drug Humira. Humira is scheduled to go off patent at the end of this year in the U.S., and several companies are already gearing up to challenge the biotech's dominance in this multibillion-dollar market. Before they can do so, however, they will have to overcome a wall of additional patents that AbbVie's management believes can delay the entry of generics until at least 2022.

Aside from Humira, AbbVie also owns around half the commercial rights to the breakthrough blood cancer drug Imbruvica, which is on track to generate megablockbuster sales. And the biotech expects to further shore up its anti-inflammatory franchise in the near future with the second-generation JAK1 inhibitor, ABT-494, which is currently in late-stage testing for rheumatoid arthritis. All told, AbbVie does come with a healthy dose of risk due to Humira's uncertain future. But its current valuation is nonetheless attractive in light of the company's overall product portfolio and management's proven commitment to paying a top-tier dividend.

Gilead is the cheapest large-cap biotech, bar none

Gilead shares have been hammered this year after sales of its hepatitis C drug Harvoni took a big step backward in the second quarter. As a result, shareholders and analysts alike have been clamoring for management to put the biotech's war chest of nearly $30 billion to work by gobbling up a revenue-generating peer. For its part, though, management has been content to continue making smaller deals to grow the biotech's clinical pipeline and product portfolio more organically.

The market has nevertheless shown its displeasure with this strategy by assigning Gilead the absolute cheapest valuation among large-cap biotech stocks, based on its paltry forward price-to-earnings ratio of seven. In fact, Gilead's shares are trading at just a tad over three times its trailing-12-month revenue.

While Gilead's present dividend yield of 2.3% is average for a major drug manufacturer, the biotech's payout ratio of around 15% suggests that management may choose to increase the payout sometime soon. After all, Gilead is currently generating free cash flows of nearly $18 billion per year, and there's little reason to believe this situation will change anytime soon. And even though Gilead does seem destined to eventually dip into the kitty to pursue a franchise-level cancer drug, the biotech's enormous free cash flows and rock-bottom payout ratio strongly suggest that its dividend won't be a casualty of a large transaction.

Because of concerns that the 40 mg dose of Teva's flagship multiple sclerosis medicine Copaxone could face generic competition sooner than expected, the company's shares have struggled mightily this year, and are currently trading close to their 52-week lows as a result.

While the outcome of this legal battle is far from certain, the heart of the matter is that it's highly unlikely that a competitor would take the significant risk of launching a generic version until Teva has exhausted its entire range of legal options. What this means is that a generic rival probably won't hit the market until late 2018 at the earliest, implying that Wall Street has overreacted to this threat.

Putting this particular risk factor aside for the moment, Teva's shares are arguably a compelling buy right now for two primary reasons. First off, the drugmaker has shown a deep commitment to paying a fairly standard yield within its peer group over the last five-plus years, making it an attractive option for income-seeking investors: 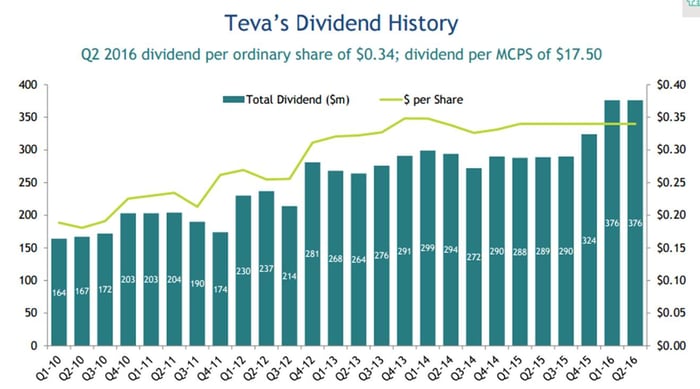 Second, Teva has greatly diversified its revenue base by acquiring Allergan's (AGN) generic-drug unit this year, further reducing the risk of falling Copaxone sales. This deal is also expected to supercharge Teva's top line next year, with the company's sales forecast to rise by nearly 17% in 2017. Now, while it's true that this $40.5 billion transaction with Allergan hasn't been kind to Teva's balance sheet, the company's healthy growth trajectory should enable it to both pay off debt and maintain its shareholder rewards program going forward.