Please ensure Javascript is enabled for purposes of website accessibility
Log In Help Join The Motley Fool
Free Article Join Over 1 Million Premium Members And Get More In-Depth Stock Guidance and Research
By Todd Campbell – Sep 24, 2016 at 7:22AM

Janet Woodcock's advocacy as director of the FDA's Center for Drug Evaluation and Research proved vital to the company's winning accelerated approval of its Duchenne muscular dystrophy drug. 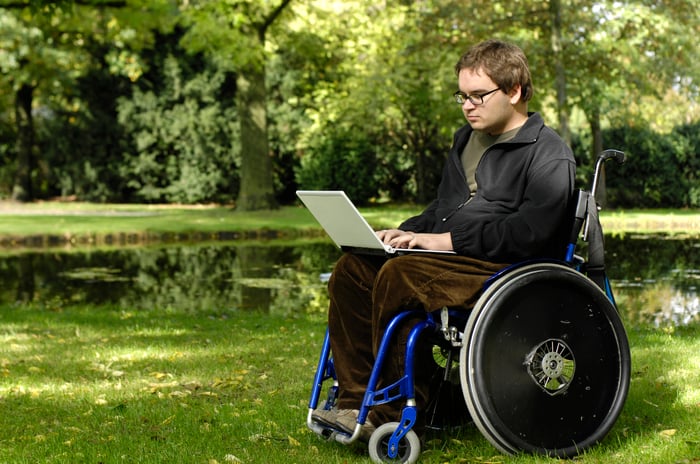 The FDA (finally) green-lighted Sarepta Therapeutics' (SRPT 0.83%) Duchenne muscular dystrophy drug Exondys 51 earlier this week, and the company and its investors have Janet Woodcock to thank for it. Woodcock is the head of the FDA's Center for Drug Evaluation and Research, and her advocacy throughout Exondys 51's FDA review appears to have been instrumental to getting this drug across the finish line.

Exondys 51 is the first FDA-approved medicine targeting the root cause of Duchenne muscular dystrophy, or DMD, a severe, life-shortening muscle-wasting disease caused by the insufficient production of dystrophin -- a key protein necessary to muscle building and maintenance.

DMD is a rare disease diagnosed in only 1 out of every 3,500 male births. Because of its progressive nature, patients lose the ability to walk when they're in their teens and suffer life-threatening heart muscle damage in their 20s. Sadly, most DMD patients succumb to their disease before reaching 40 years old.

A new, yet controversial, approach

DMD is caused by genetic mutations that act like a stoplight in dystrophin production. One of the most common of these mutations, occurring in 13% of patients, curbs dystrophin production at exon 51. By allowing the gene to skip over exon 51, Exondys 51 restores the body's ability to produce truncated, yet functional, dystrophin.

Encouraging results from a phase 2 trial involving 12 boys led Sarepta Therapeutics to file for accelerated review of Exondys 51 in June 2015. Accelerated review is specifically designed for drugs targeting indications with limited treatment options and a poor prognosis, and it allows a drug to reach the market prior to a company's conducting phase 3 confirmatory studies. In order to qualify for accelerated approval, a drug must deliver on a trial endpoint that is reasonably likely to predict clinical benefit.

To help determine whether or not Exondys 51 met that standard, an FDA advisory committee was initially slated to meet in January 2016. However, that meeting was delayed so that the FDA's Division of Neurology Products could more thoroughly digest Exondys 51's trial data.

The meeting was eventually held on April 25, and at that meeting, committee members were presented with the division's findings and Sarepta Therapeutics' own assessment of Exondys 51's phase 2 trial results. The committee also heard testimony from dozens of patient advocates during an open public forum.

Despite compelling testimonials, a solid safety profile, and evidence that Exondys 51 slightly increases dystrophin levels, the advisory committee voted 7 to 6 that Exondys 51's trial data didn't deliver on the "likelihood of clinical benefit" standard and, therefore, couldn't be approved under the early approval pathway. Two of the six people who voted in support of an early approval were patient representatives, and a third was a consumer representative.

Because Woodcock ultimately has the final say on whether to grant approval, the advisory committee's no-go recommendation put Exondys 51's fate in her hands.

In early May, only days after the advisory committee's vote, Woodcock internally relayed her plans to grant Exondys 51 approval. That decision was contentious because it came prior to the completion of Ellis Unger and his review team's final assessment. On May 25, ongoing debate over Exondys 51's efficacy led to Woodcock's delaying an official announcement on approval "indefinitely."

Unger, the director of the neurology products group tasked with reviewing Exondys 51, was one of the most vocal opponents of Woodcock's support of Exondys 51's approval. Specifically, he questioned her interpretation that Exondys 51's minimal improvement in dystrophin production delivered a "reasonable likelihood of predicting clinical benefit."

According to a board convened at Unger's request to review the FDA's evaluation of Exondys 51, Unger wasn't alone in his belief that Exondys 51's data was lacking.

In a letter appealing Woodcock's decision, Unger wrote that his review team reached a "unanimous conclusion that the NDA [New Drug Application] should receive a complete response action." He also wrote that this conclusion "was shared by the Office of Biometrics, which performed the statistical review, as well as the Office of Clinical Pharmacology, which performed the pharmacology review."

Woodcock herself admitted to the FDA review board that there were significant flaws in Sarepta Therapeutics' 201/202 study design and the data it generated, but that she did not "want to hold" those flaws "against the patients."

In an attempt to overcome objections raised by study 201/202's flaws, Woodcock requested interim results from another Sarepta Therapeutics trial (study 301) in June. At the time of her request, Woodcock told Sarepta Therapeutics management that if interim results from study 301 showed a meaningful increase in dystrophin production in patients, an accelerated approval could be granted within days.

Unfortunately, study 301's interim results were anything but a slam dunk for Exondys 51. The data showed that Exondys 51 increases patient dystrophin by just 0.3%. Nevertheless, Woodcock determined that any increase, even a small one, still warranted approval, so she finalized her decision memorandum in support of Exondys 51 in mid-July.

In his formal appeal of Woodcock's decision in July, Unger raised four points he wished to have reviewed: "(1) Dr. Woodcock's involvement in the early stages of review of the eteplirsen NDA; (2) her extensive involvement in planning the AC [advisory committee] meeting and her participation; (3) her initial decision (on May 4, 2016) to approve the eteplirsen NDA before the review team had completed even their draft review memoranda; and (4) her issuance of her final decisional memorandum before Unger finalized his own decisional memorandum as Director of ODE-I [the FDA's Office of Drug Evaluation I]."

The review board handling Unger's appeal determined it "was unusual for a center director to be so involved in the early stages of reviewing an NDA" and that "consensus on the SDR Board was that Dr. Woodcock went several steps further than mere involvement and thereby departed from typical practice among the centers."

The board also found that "by her own admission, Dr. Woodcock had a direct hand in reviewing the data submitted in support of the NDA, even before the review team had written their draft review memoranda, and actively encouraged the review team -- including Dr. Unger -- to come around to her way of thinking in their own reviews."

During the review process, Woodcock organized meetings with patients that at least one attendee described as "intense," "personal," and "intimidating." Woodcock also requested a longer-than-typical open public hearing for the advisory committee meeting, and requests to extend the meeting to two days from one day were overruled.

In the end, the scientific review board determined Woodcock's deep involvement "upended the typical review and decision-making process," but it also acknowledged that Woodcock and Unger simply disagreed on the "scientific conclusion and the sufficiency of the underlying rationale."

To that point, Woodcock told the review board, "He [Unger] is entitled to his own opinion."

In the end, the review board sent a letter to FDA commissioner Robert Califf encouraging him to conduct a "thorough substantive review of the scientific dispute in this matter or, in the alternative, to convene a panel of relevant experts to conduct such a review and provide advice to the agency and you, as Commissioner, on whether the evidence of the effect of eteplirsen on the surrogate endpoint is reasonably likely to predict clinical benefit."

Rather than doing that, however, Califf deferred to Woodcock on the matter, clearing the way for Exondys 51's green light.

Woodcock and Unger's debate over Exondys 51's efficacy could end up being addressed by a future confirmatory phase 3 trial required by accelerated approval. Therefore, whether Exondys 51's small increase in dystrophin translates into a clinical benefit won't remain a mystery forever. In the meantime, Woodcock's advocacy and willingness to go against the recommendation of those around her and approve Exondys 51 gives new hope to many young boys facing steep odds. Let's just hope that hope isn't misplaced.