Investor skepticism has been a fact of life in the auto industry in recent years. Shares of General Motors (NYSE:GM) have declined this year even though the company expects to earn a record profit. Meanwhile, Ford (NYSE:F) is also on track for a solid year -- although perhaps not quite as good as 2015 -- but its shares are down by double digits. 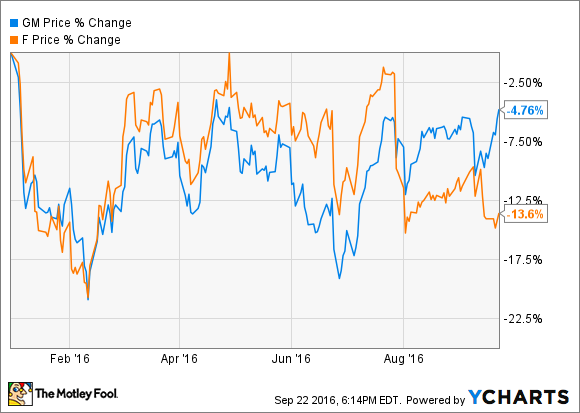 The remarkable thing is that while many pundits talk about stocks being extremely expensive, General Motors trades for less than six times its projected 2016 earnings. Ford stock is only slightly more expensive, at 6.7 times earnings.

These rock-bottom valuations imply that investors expect earnings to crater at GM and Ford in the coming years. Yet these fears are overblown, especially for GM. Here's why I am sticking with General Motors stock for the foreseeable future.

Both General Motors and Ford get the vast majority of their earnings from North America, and particularly the United States. Right now, U.S. auto sales appear to be on track to decline about 1% year over year in 2016 relative to the record high of 17.47 million vehicles sold last year.

This is the main reason why many investors fear an imminent crash in automakers' earnings. However, U.S. auto sales have probably reached a plateau, rather than a "peak" that will be followed by a sharp decline. The U.S. economy continues to grow, while the average age of the U.S. vehicle fleet remains near an all-time high. That should lead to plenty of replacement demand at least for the next few years.

Many U.S. consumers will need new vehicles in the next few years. Image source: The Motley Fool.

Furthermore, a modest sales decline is not necessarily a big problem for automakers. The real issue is if sales declines lead to surging inventories and rampant discounting, hurting profit margins.

So far, that hasn't happened. Vehicle inventory is starting to creep up a bit, but still remains within the normal range at GM. Moreover, GM's incentive spending is stable -- and its average transaction price is up significantly compared to 2015.

Another reason to be optimistic about GM's prospects is that it plans to strengthen its product portfolio in the next few years.

For example, while GM is a leader in the truck and full-size SUV markets, its crossover lineup leaves something to be desired. In the mass market, the Chevy Equinox and Chevy Traverse are aging -- and it shows in their recent sales numbers. Redesigned versions of both models will hit dealer lots in 2017. An all-new midsize crossover that bridges the gap between the Equinox and Traverse will then arrive in 2018.

Meanwhile, the Cadillac luxury brand will expand its crossover lineup from one model to four by 2020. This will allow Cadillac to cover about 90% of the global luxury market as measured by segment sales volume, compared to just 50% today.

With more and better products in key market segments, GM should be able to gain market share without resorting to discounts. At the same time, the company's efforts to use fewer core vehicle architectures will help keep costs down.

Financial segment earnings on the rise

Finally, General Motors is in the midst of a multi-year plan to grow its in-house financing arm, GM Financial. GM Financial has more than doubled its total earning assets since the beginning of 2014.

Up until now, the investments necessary to support that growth have offset the increased scale, keeping earnings relatively flat. However, the company expects GM Financial's pre-tax earnings to double by 2018. This will provide an important ancillary profit stream that is not directly tied to a particular year's sales results.

This isn't a flash in the pan

In the long run, automakers may be pressured by falling vehicle ownership rates. However, that process will take a long time to play out. GM will be earning huge profits for many years to come -- and returning the vast majority of that cash to shareholders.