Declining business travel, political unrest, disruption by services like Airbnb, and more -- here's a snapshot of the hospitality industry, and why the outlook is still promising for MGM Resorts, Extended Stay and Marriott stock.

Should you invest in hotel stocks? After a volatile couple of years, things are looking good for the hotel industry so far in 2016. The Baird/STR, a hotel industry stock index following the 20 largest hotel companies, shows the hospitality sector up about 4% year to date.

Still, that follows a drop in 2015, and there are plenty of risks ahead. Volatility in this sector has been caused by corporate travel pressure, political unrest, disruption by services like Airbnb, and an arms race between companies for who can control the most rooms. 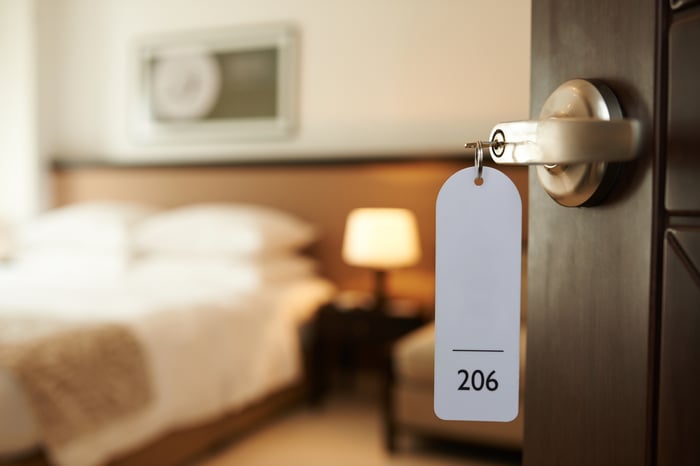 With so much going on, here are the companies that stand out.

Marriott: Buying Starwood to become dominant in the industry

Marriott International (MAR -1.38%) slightly cut its guidance for 2016 because of lower corporate travel demand than previously expected. Despite this corporate travel headwind and lower total occupancy, Marriott was able to increase its revenue per available room (RevPAR) systemwide by 2.9% year over year in the recent quarter. Management expects RevPAR to grow 3.2% for full year 2016. This kind of efficiency to continue growing earnings, which rose 3% in the quarter year over year even in the face of market pressures, is one of the reasons Marriott looks like an attractive bet in a volatile industry.

Marriott has been one of the most aggressive companies by room development in recent years, with more than 785,000 rooms now and over 285,00 in the pipeline. Marriott is also in the process of acquiring Starwood (NYSE: HOT), which will make it the largest hotel company by both market cap and by number of rooms worldwide, with 30 brands from economy to the elite segments.

MGM Resorts: Not a true hotel company, but an interesting choice

Another interesting option could be MGM Resorts International (MGM 0.18%). MGM is not a hotel company per se, but as a resort company, it still has a major hotel segment and is a force in the industry. Even though room revenue makes up less than a quarter of MGM's total sales, it is one of the company's fastest growing segments and is helping to lead overall earnings growth. MGM has over 40,000 rooms on the Las Vegas Strip alone, making up around half of total hotel rooms there. Those properties' RevPAR growth in the second quarter was 3% year over year, but MGM management expects that RevPAR to grow 7% year over year in the third quarter.

MGM is an interesting choice in the hotel industry because it has such a unique offering that's unlikely to be disrupted by a business like Airbnb, since it offers a total resort experience that other hotels and personal residences do not. Another advantage that MGM has over its other hotel competitors is that its hotels also offer by far more convention space. CEO Jim Murren noted in the call that he expects group business bookings to continue growing to record levels this year and next, despite the corporate travel slowdown that Marriott and others have cited.

Extended Stay: A non-traditional hotel with a high dividend

Extended Stay (STAY) is also a non-traditional hotel company, but one that could prove to be a winner in an uncertain hotel industry. Extended Stay offers longer term lodging, usually for a week or more at a time, in rooms that include kitchens. Because of its differentiated offering, Extended Stay also serves a different market than Airbnb and is less susceptible to that kind of disruption. The company operates less than 700 properties, compared to more than 5,000 operated by Marriott, but has found great operational efficiency at that scale. The company is also exploring a new franchising model that could help the company to grow faster.

Extended Stay grew income 88% in 2015 year over year, but that was largely due to property sales during the year. Because of that one time event, net income this year will be far lower than last year. Still, the company is clearly operating well, with comparable property EBITDA expected to rise 4%-6%, and its long-term forecasts look good going forward. Extended Stay stock looks valuable now at just 15 times forward earnings estimates, and offers an industry-high 6.6% dividend yield.