There are a lot of energy infrastructure companies and master limited partnerships out there, but there is probably only a small handful that are worthy of having a spot in your investment portfolio. Two that stand out as good investments are Magellan Midstream Partners (NYSE:MMP) and Spectra Energy Partners (NYSE:SEP). Both have many traits you want in this kind of investment, but which one is the better buy today?

The decision between the two is awfully close, but there is one factor that puts one over the other. Let's take a look at why they are so close and the one differentiating factor to consider.

When comparing Spectra Energy Partners and Magellan Midstream Partners, the race between the two is pretty tight. Both companies have very solid investment grade credit ratings with relatively modest debt levels for master limited partnerships. Both are rather prudent with their payout to investors by retaining a decent amount of cash each quarter to invest back in the business and leave some wiggle room for when times get tough.

The one advantage Spectra Energy Partners can point to today is its growth pipeline. Between now and the end of 2017, Spectra Energy Partners expects to put another $5.7 billion worth of new projects into service whereas Magellan is looking to add less than $1 billion during that time. Spectra's growth prospects are a little more robust because its business is predominantly in natural gas, an industry that is growing much faster as shale gas has required massive infrastructure spending. By contrast, Magellan is mostly in the much more mature business of handling refined petroleum products.

For Magellan, the advantage has been the fact that its more modest growth means it hasn't needed to raise as much capital through issuing shares and can focus more on per share returns. Over the past five years, Magellan has barely issued new shares while Spectra Energy Partners has more than tripled its share count. This has allowed Magellan to increase its per share dividend much faster than Spectra. 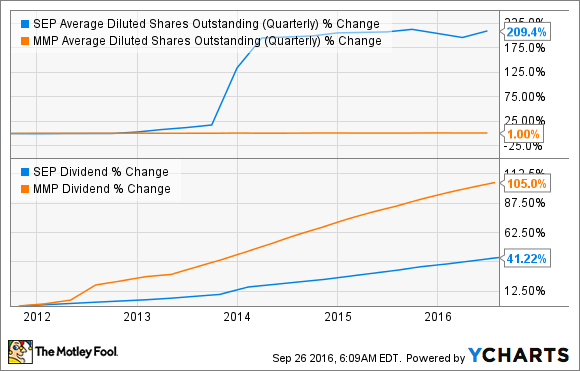 So overall, it seems like it's a push between the two companies. Spectra seems to have the brighter future ahead with all that anticipated growth, but Magellan has been a little more prudent about how it grows in order to maximize shareholder value.

The one factor that isn't really considered here is the fact that Enbridge (NYSE:ENB) has agreed to acquire Spectra Energy Partners parent company, Spectra Energy (NYSE:SE) to form North America's largest energy infrastructure company.  For investors in the parent organization, there are some clear benefits from economies of scale and greater revenue diversity as Enbridge's infrastructure is mostly oil related while Spectra is almost exclusively gas.

The big question for Spectra Energy Partners, though, is how the combined companies plan to manage their subsidiary MLPs. The combination of the two companies means that Enbridge will control four separate master limited partnerships, each with its own growth prospects as well as a little bit of asset overlap. The immediate question that comes up is whether Enbridge will move some assets from one partnership to another, or if some assets will need to be sold for regulatory purposes.

The other question for further down the road is whether Spectra Energy Partners will face some challenges for financial support from the parent organization. Today, the combined company has $26 billion in projects under construction and another $48 billion in projects that are under review. Chances are, not every one of those projects will be approved because the parent organization will need to prioritize to the highest return projects. This could potentially stall growth at Spectra Energy Partners over the long term.

While there is no guarantee that Magellan won't also be bought out by someone else in the future, it is currently a stand-alone organization with no parent company to answer to -- it bought out its general partner in 2010. This means that the future is a little bit more certain at Magellan, at least until we get a more concrete plan from Enbridge's management about how it plans to manage its multiple partnerships.

I won't deny that the potential growth at Spectra Energy Partners looks attractive, and so far the company's management has done a great job of balancing that large growth portfolio with sound financial management. However, until there is a detailed plan from Enbridge about how it intends to manage all of its master limited partnerships at once, there is a little uncertainty about the company's future.

I am a little wary about uncertainty when it comes to mergers and the headaches they can cause, so for the time being I have to give the nod to Magellan. If Spectra Energy Partners gets the green light to operate as it has recently with the added support of a larger parent company, though, then maybe this is a debate worth revisiting.