Dividend funds like BlackRock Equity Dividend Fund (MADVX -0.80%) seek to generate market-beating returns from stocks that pay dividends to their investors. The goal is to provide investors with current income in the form of dividend yield, plus growth from rising stock prices over time.

It seems simple, but many dividend funds fail to live up to their promise of providing income and capital appreciation. Does BlackRock's fund live up to its objective? Here's everything you need to know.

BlackRock's fund has a simple strategy to seek long-term total return and current income by investing in dividend-paying stocks around the world. Notably, the fund's prospectus notes that it may invest up to 25% of its assets in foreign stocks, whereas many dividend-paying funds stick to U.S. stocks only.

Management stated in the prospectus that it "believes that stocks that have yields often provide more attractive long-term total return and greater price stability during periods of downward movements in market prices than stocks that do not pay dividends." Thus, it isn't just about beating the market on an absolute return basis, but also on a relative basis, by capturing more of the market's upside and less of its downside.

The fund primarily invests in large-cap companies that have market capitalizations, or market values, in excess of $10 billion. At the time of writing, the fund had about 96% of its assets in large-cap stocks, with the remainder invested in cash and mid-cap stocks, respectively.

The fund is more concentrated than other dividend-paying funds, reporting that it owned just 88 different stocks at the end of August 2016. This compares to more than 200 stocks in the actively managed Vanguard Equity Income fund, and about 100 stocks in T. Rowe Price's Dividend Growth fund.

The fund benchmarks its performance to two large-cap indexes, the S&P 500 and the Russell 1000 Value Index. The S&P 500 is a large-cap index that includes about 500 stocks that are selected so that they broadly represent the makeup of the American economy. The Russell 1000 Value Index is an index that tracks large-cap stocks that fit into a "value" style because of their price-to-book ratio, earnings growth forecasts, and historical sales per share growth.

The fund has a mixed record of beating its benchmarks. Its 10-year annualized returns topped the Russell 1000 Value index, but not the S&P 500. The fund lagged both indexes over shorter periods of time. 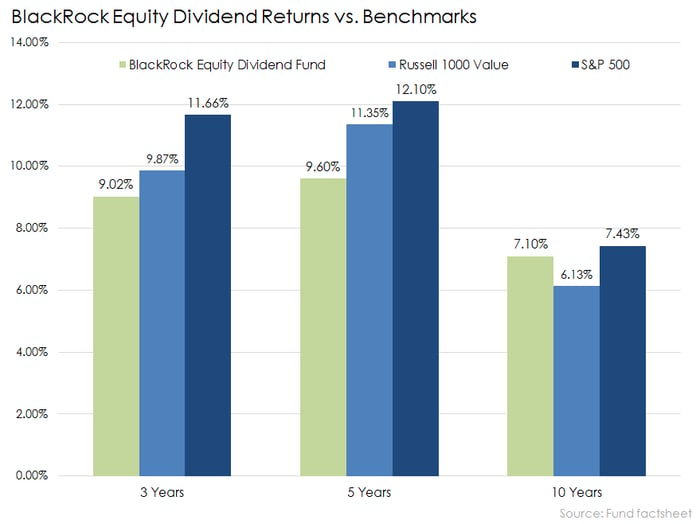 BlackRock's Equity Dividend Fund isn't cheap. The Institutional share class carries an annual expense ratio of 0.70% of assets, and fees go up from there, all the way up to 1.67% for its Investor C shares.

Though high fees are never good, they're particularly concerning for dividend funds because they eat into the income that can be paid out to the fund's investors. Note that as fees go up, the yield on the fund's shares go down. This is because fees are subtracted from yields paid to fund investors.

Is it right for you?

BlackRock delivers on its promise of less volatility. The fund certainly performed much better during the 2008 financial crisis than its benchmarks, helped by its focus on higher-yielding stocks. But the fund has been a laggard in the bull market coming out of the crisis.

Whether or not it's a good fund depends on the share class available to you. If you can invest in the institutional share classes, the 0.70% annual expense ratio is relatively high, but not outlandish. For reference, the Vanguard Equity Income Fund and T. Rowe Price Dividend Growth Fund, two actively managed dividend funds, carry annual expense ratios of 0.26% and 0.64%, respectively.

However, if your only choice is any other share class, look elsewhere. It makes very little sense to invest in a dividend fund if most of the dividends go to paying fund fees and expenses. With annual fees of 1% or more, plus loads on some share classes, it's institutional shares or bust for this fund.