The numbers show that the energy infrastructure company has some work to do to catch up.

Energy Transfer Equity (ET -1.64%) is unique in the energy infrastructure sector. Not only does it operate farther across the value chain than most of its rivals but it makes most of its money by managing its affiliates and not directly from owning infrastructure assets. While that adds to its complexity, it does not diminish the fact that the company is a major player in the sector. Here's how it stacks up against its rivals.

A failed attempt at taking the crown

When the energy market was in turmoil last year, Energy Transfer Equity went on the offensive to bolster its size in an attempt to create the largest energy infrastructure company in North America. To do so, it targeted a takeover of rival Williams Companies (WMB -2.03%) eventually signing a cash and stock deal. Unfortunately, the market grew even weaker, which wrecked the potential synergies the Williams deal was expected to bring. Worse yet, its proposed deal structure would not work, which ultimately led to the transaction's collapse. Because of that, the company lost its chance to vault to the top of the sector. 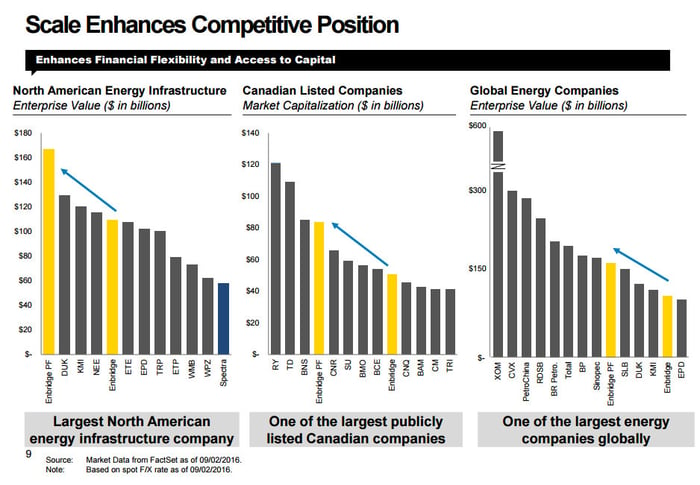 Instead, Canadian energy infrastructure giant Enbridge (ENB -1.04%) recently announced a merger of its own that puts it in the position to claim the top spot as the largest company in the sector. That leaves Energy Transfer Equity as the fifth largest infrastructure company by enterprise value.

The pipeline comes up a bit short 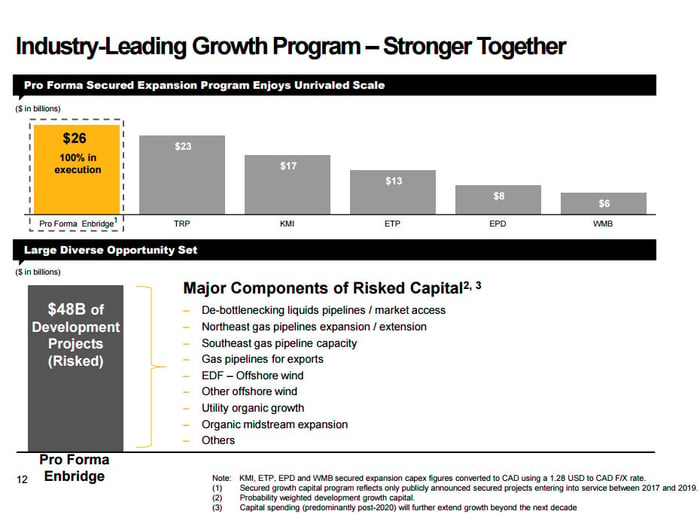 However, because it didn't close that deal Energy Transfer's growth backlog now ranks fourth instead of third. That smaller growth pipeline mutes Energy Transfer's ability to grow its payout to investors in the future compared to its rivals with Enbridge, for example, forecasting that it will deliver peer-leading dividend growth of 10% to 12% annually through 2024.

Battle of the balance sheet

The final area we'll explore is where Energy Transfer Equity's balance sheet ranks versus its pipeline-focused peers. As the chart below shows, it ranks dead last versus its five largest peers:

Not only does the company have the highest debt to EBITDA in the group, but it has the lowest credit rating. In fact, its credit is rated well below investment grade, whereas the rest of its rivals boast investment-grade ratings.

That weak credit rating was one of the reasons why its deal for Williams fell apart. Under the terms of the transaction, Energy Transfer was going to take on an incremental $6 billion in debt in order to pay Williams' shareholders cash as part of the cash and stock deal. That debt, however, would have further weakened its already concerning credit metrics and was one reason why investors did not like the deal.

What these rankings show is that while Energy Transfer Equity is one of the largest energy infrastructure companies in North America, it trails behind several others in key categories like growth and balance sheet strength. This somewhat limits the upside for investors because the company needs to improve its balance sheet before it can afford additional growth. Because of that, there simply are better options for investors in the energy infrastructure space than Energy Transfer.