Please ensure Javascript is enabled for purposes of website accessibility
Log In Help Join The Motley Fool
Free Article
Join Nearly 1 Million Premium Members And Get More In-Depth Stock Guidance and Research
By Daniel B. Kline – Updated Sep 27, 2016 at 10:11AM

Desktops have been surprisingly popular even while laptops and tablets improve.

Personal computers have stopped a three-year slide in customer satisfaction by climbing 1.3% to a 78 on the latest American Customer Satisfaction Index (ACSI) Household Appliance and Electronics Report.

Desktop computers continue to rank the highest on the ACSI survey, which uses a 100-point scale, remaining unchanged from last year at 81, while tablets and laptops have improved for the first time in four years. Tablets climbed 4% to a score of 78, inching ahead of laptops, which gained 3% to 77.

"In an increasingly mobile world, smartphones are the biggest threat to PC sales, and tablets have not been the long-term panacea the PC industry was hoping for," said ACSI Chairman Claes Fornell in a press release.

And while it seems odd that consumers prefer the somewhat outdated desktop form factor, ACSI Managing Director David VanAmburg explained why in an email to The Motley Fool.

"Consumers like the convenience and mobility of laptops and tablets, but the user experience can't hold up to desktops on many levels," he wrote. "Larger monitors, better speakers, and more powerful processors are a factor. Also, desktops are typically connected to the Internet via a landline as opposed to Wi-Fi, which may contribute to a better quality online experience than laptops and tablets can offer." 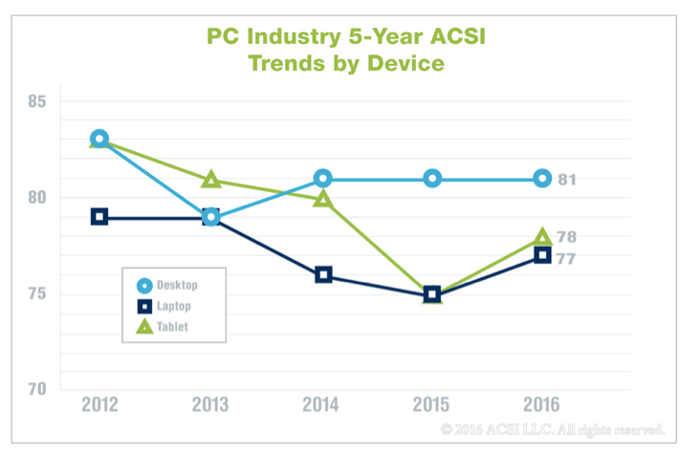 Which manufacturers are on top?

When it comes to PC manufacturers -- which includes desktop, laptop, and tablet makers -- consumers remain enthralled with Apple (AAPL -1.38%), which equaled its score from last year at 84. Samsung (NASDAQOTH: SSNLF) climbed by 6.4% to snag second place at 83, while Amazon.com (AMZN 0.24%), which only makes tablets, jumped 2.6% to 80 for the No. 3 slot. Acer, ASUS, and Dell all tied for fourth at 78 and HP, despite finishing down the list, gained 5.5% to 77. Lenovo and Toshiba also gained while the  combined score for all other, smaller PC manufacturers dropped 3.9% to last place.

"Interestingly, the two companies that lead in smartphone satisfaction also lead the PC industry, although they have very different strategies regarding the future of tablets," said Fornell. "Apple is targeting business customers on the go with laptop-like features for its iPad, while Samsung tablets occupy their own space as devices for entertainment and browsing -- not laptop replacements." 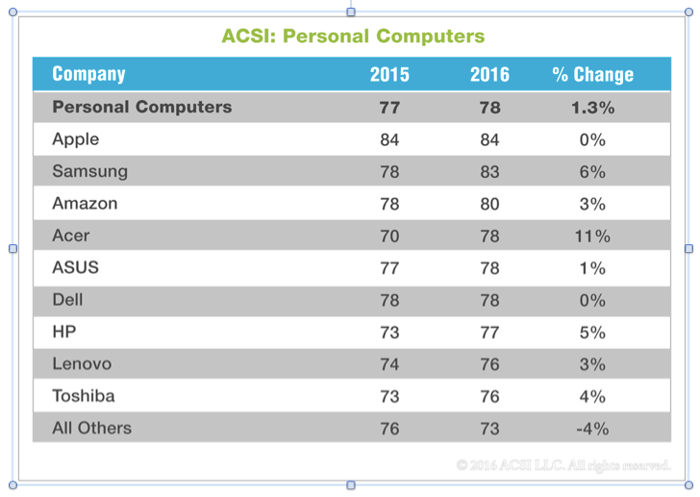 Overall, consumers continue to rate design (size, visual appeal) as the strongest aspect for PCs, although that number dropped from 84 last year to 83. On the positive side, ease of operation climbed from 80 to 81 while ability to keep crashes to a minimum inched up from 79 to 80.

Satisfaction with availability of software, apps, or accessories and with processor speed all dropped from last year.

While it's unlikely that desktop PCs will ever stage a major sales comeback, it's clear that laptops and tablets may have a hard time completely replacing them. IDC reported in July that PC shipments -- including desktops, portables, ultraslim notebooks, Chromebooks, and workstations -- in the second quarter totaled 62.4 million units, a year-over-year decline of 4.5%, which was better than the forecast of a 7.4% decline.

Even as the other devices become more useful, with better technology, and the line between the two continues to blur, it's obvious that consumers still want the power and monitor size possible with a desktop.

Those advantages may dim going forward, but for now, even though sales have fallen, desktops still make the most sense for some of us.

Is SentinelOne Stock a Buy Now?