SUVs are big sellers for Ford all over the world. The latest version of the midsize Edge crossover is a hit in the U.S. and China, and sales are growing in Europe. Image source: Ford Motor Company.

Ford Motor Company (NYSE:F) is charting a new course. New technology threatens to upend the traditional model of car ownership -- and the Blue Oval wants to make sure it can thrive amid the changes.

As Ford executives explained at the company's annual Investor Day earlier this month, the new strategy involves making the most of the four "profit pillars" that drive its existing business while investing in high-profit-potential opportunities in the emerging world of automated "mobility."

One of those key profit pillars is, of course, Ford's popular global line of sport-utility vehicles. Here's how the Blue Oval says it will build on its SUV success.

Ford has a good position in a booming market, but it could do better

"Our opportunity is to build the same leadership position [that Ford has in pickups and commercial vans] with all of our utility vehicles," CEO Mark Fields said during his presentation. "Today, we have strength in large utilities, whether it's Explorer or Expedition, but also in small utilities as well with EcoSport and Kuga and Escape." 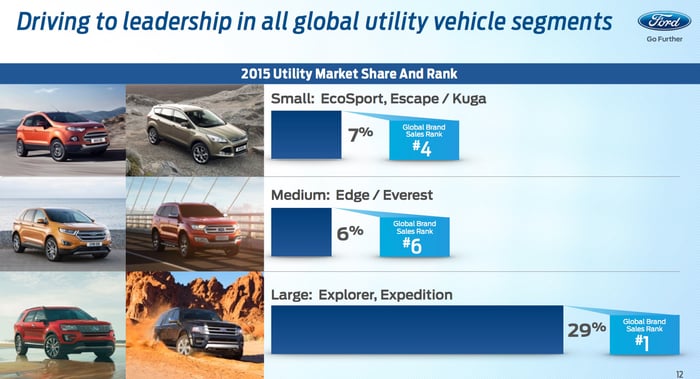 Clearly, as Fields said, Ford has a strong global position in SUVs. That's good news: These are profitable products, particularly in higher trim levels. But just as clearly, Ford has considerable room for further growth, particularly among small and midsize car-based "crossover" SUVs.

Fortunately, the global boom in demand for SUVs shows no sign of slowing. "The global utility segment grew 55% from 2010 to 2014," Fields said. "And that was during a time period when oil was $100 a barrel. Since then, we've seen even more growth in the utility segment around the world, and we're taking action to have a larger share of that growth going forward." [Emphasis added]

How Ford will boost its SUV sales and profits

What kind of action is Ford taking? Ford is gearing up to add four new SUVs to its product portfolio, filling the gaps in its lineup. It's also making incremental moves to boost the sales and profitability of the models it already has on the market.

Ford recently launched the midsize Edge crossover in Europe. Sales haven't been huge, but it has sold more than expected. Now, Fields said, Ford will build on that success by adding high-profit luxury-trim "Vignale" versions of the Edge and the smaller Kuga (the European version of the Escape).

The Europe-only Vignale models are similar to the top-level "Platinum"-level trim lines it offers here in the U.S. But in Europe, the VIgnale models also come with an added level of service at dealers.

Ford has already made some moves with the Edge in China. It set up a local factory to build two different versions of the popular midsize crossover. One is very similar to the U.S. Edge, with seating for five, and the other is a longer-wheelbase variant with seating for seven. Fields noted that sales of the Edge in China through August have roughly doubled from a year ago.

The Ford EcoSport, a small SUV based on the subcompact Fiesta. Image source: Ford Motor Company.

Ford's small Fiesta-based EcoSport SUV isn't sold in the U.S., but it's an important model in many abroad markets. Ford has recently made moves to reduce the cost of building the EcoSport. That will boost profits in some markets and allow for more competitive pricing in others. It's also expanding production and working to bring it to new markets, mostly in Asia.

Fields said that Ford will launch all-new versions of its big truck-based SUVs next year -- and following the lead of Ford's pickups, they'll have aluminum body panels. "And then finally, on top of that, over the next four years, we're going to introduce four new utilities globally into segments that we currently don't compete in," Fields said. (No, he didn't give details.)

Like pickups, SUVs are key to Ford's present and future profits

It may sound strange that one of the steps Ford is taking to prepare for an electrified, automated future is to make big investments in SUVs. But it makes sense: Like Ford's pickups, the SUVs are profitable products in a segment where Ford has a strong position.

Making the most of that market position is not only key to funding Ford's research and development efforts on electric vehicles and self-driving technology, it's also key to generating a strong return for Ford's shareholders.

That has always been a priority for Ford, but now it's explicit: Fields said he wants Ford to be in the "top quartile" of returns to shareholders versus its peer group going forward. Ford will get there by building great, profitable products (and in time, services) that customers want. Right now, all over the world, that means SUVs.