Alaska Air and Virgin America have slightly adjusted the target for when they will complete their merger, but investors shouldn't read too much into it.

Shares of trendy airline Virgin America (VA) doubled between early February and early April, after Alaska Air (ALK 1.27%) offered to buy Virgin America for $57/share. For the past six months, Virgin America stock has traded near the $56 mark: i.e. at a small discount to the takeover price. 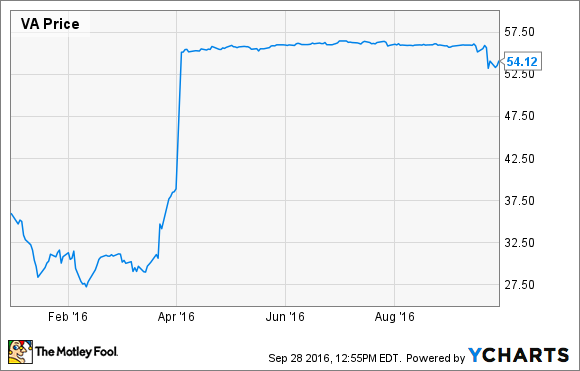 However, Virgin America stock plunged as low as $52 last week, indicating new doubts about whether it will be able to consummate its merger with Alaska Air. It has recovered a bit since then, and now trades for about $54/share.

There is little reason to worry, though. Alaska Air definitely wants to complete the deal and there is no good justification for federal antitrust regulators to block it.

Since the Alaska Air-Virgin America deal was announced in early April, Virgin America's financial performance has deteriorated. Total revenue per available seat mile slumped 7.9% at Virgin America in Q2 due to rising competition and falling fares in its core markets. Adjusted pre-tax income increased slightly on a year-over-year basis, but only because of the sharp drop in jet fuel prices.

Sometimes, new financial headwinds like this could cause a potential acquirer to look for ways to get out of the deal. That said, Alaska Air doesn't seem to be having second thoughts.

From day one, Alaska Air's management has described the Virgin America takeover as a means to become the leading airline on the West Coast. Alaska Air dominates the Pacific Northwest due to its hubs in Seattle and Portland, Oregon, but it is a relatively minor player in California. Acquiring Virgin America -- which has its two main focus cities in San Francisco and Los Angeles -- will quickly make Alaska Air competitive in California.

Yet while regulators have a duty to investigate proposed deals like this one, it wouldn't make sense for them to challenge the Alaska Air-Virgin America combination.

First, there is very little overlap in the two carriers' route networks. Alaska and Virgin America compete on the Los Angeles-Seattle route and a handful of routes out of San Francisco, but that's it.

Second, even after the merger, the bulked-up Alaska Air would be barely more than a third the size of Southwest Airlines, which is in turn about half the size of the three big legacy carriers. The merger wouldn't create a new airline giant -- and it might even help Alaska compete more effectively with larger carriers.

Third, while the Virgin America deal would make Alaska the top airline on the West Coast, it would face significant competition from all four of its larger rivals. And in California, the main area where Alaska would be expanding, it would remain well behind the market leaders.

Thus, the only markets where Alaska Air would be large enough to be anti-competitive would be the markets it already dominates: Seattle, Portland, Oregon, and Anchorage, Alaska. The merger would have little impact on its position there. Any concerns could be easily addressed by giving up a few gates, particularly in Seattle, where gate space is scarce right now.

The Alaska Air-Virgin America merger has been delayed slightly, but it will probably be completed by the end of next month. Alaska Air is eager to close the deal, and the antitrust implications are minimal given both companies' small size within the U.S. airline industry. Thus, the recent decline in Virgin America's stock price represents an overreaction to the extended merger review deadline.

Adam Levine-Weinberg owns shares of Alaska Air Group. The Motley Fool has no position in any of the stocks mentioned. We Fools may not all hold the same opinions, but we all believe that considering a diverse range of insights makes us better investors. The Motley Fool has a disclosure policy.