The huge-selling F-150 pickup is probably the most important single contributor to Ford's bottom line. Ford expects that to be true for decades to come, even as technology transforms the auto business. Image source: Ford Motor Company.

Ford Motor Company (NYSE:F) is changing things up: The Blue Oval is looking past its current success selling popular high-profit cars and trucks into a future where self-driving vehicles enable alternative forms of "mobility" -- and it's setting itself up to make sure that its profits continue to flow well into that future.

Earlier this month, Ford executives spent a full day explaining the Blue Oval's new strategy to investors. The gist of the strategy is that Ford will will make the most of what it calls its four "profit pillars," while it makes investments to grow and thrive in three specific areas as that future vision becomes reality. As Ford sees it, the profit pillars won't just fund those investments now. They'll continue to be significant contributors to Ford's bottom line for decades to come.

As any Ford shareholder knows, the most important of those profit pillars are Ford's huge-selling trucks. That's likely to be true well into the future, too. Here's what Ford had to say about them.

Trucks are the most important of Ford's profit pillars

CEO Mark Fields made it clear: Ford has a commanding position in the global markets for pickup trucks and commercial vans, and it's going to stay focused on what works. 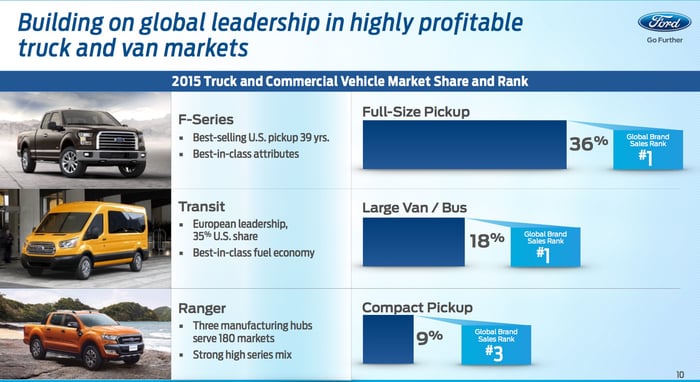 This isn't hyperbole. Ford's F-Series line has been the best-selling vehicle line in America for decades. That's hugely important: Ford has operations all over the world, but those pickups generate an outsized share of profits. It's a no-brainer that Ford will continue to make big investments in its crown jewel.

Ford's commercial vehicles get somewhat less attention, but they're also important. Ford's Transit vans are top sellers in the U.S. and Europe, and the Blue Oval is battling hard for the top-selling position in China's commercial-van market as well. These are also very profitable products that make a big contribution to the Blue Oval's bottom line, and Ford will continue to build on the Transit's success as well.

I found it interesting that Fields also mentioned the Ranger, Ford's midsize pickup. Production of Rangers for the U.S. market ended in 2011, but an all-new version was introduced for world markets and it has been successful. It's easy to see how Ford will build on the Ranger's success: By bringing it back the U.S. Ford is expected to launch an all-new built-in-Michigan Ranger, probably for the 2019 model year.

"We deeply understand these customers," Fields said. "We know how they use our products. And we really understand what makes them tick and what's important to them around durability and quality, but always with an eye toward cost of ownership. And we're expanding what I call our moat, and I think we've proven in the past that we can not only defend this, but also at the same time, grow it as well."

As Ford sees it, its advantage in trucks isn't just about the products themselves, but also about its relationships with key commercial customers -- and its manufacturing chops.

"Our leadership in trucks and vans is based on, I think, 4 very important elements," Fields said. "First, really understanding that customer, really deep customer insights. That leads us to have very trusted relationships with our customers based on our sales and service capabilities. We have a broad range of configurations, which is important for many of these customers who buy a portfolio of vehicles. And of course, we have advanced manufacturing capabilities, which is so important to build that complex range, and to do it at scale affordably and with the quality our customers expect."

The upshot: Trucks will be important to Ford for decades to come

Popular visions of an electrified, automated automotive future don't usually include big pickups and commercial vans. But they're huge sellers, and Ford expects its pickups and vans to be big sellers for decades to come.

In time, that might involve revamping the vehicles with electric drivetrains, or adding self-driving capabilities, or both. But while parts of the world may be transformed by coming advances in automotive technology, it seems like a safe bet that pickups and vans will be in demand for a long while yet -- and Ford is planning to continue to profit big from that demand.