Rooftop solar could be the big winner for solar companies over the next two years. Image source: SunPower.

The last two years have been relatively kind to Canadian Solar (NASDAQ:CSIQ) and solar panel manufacturers more broadly. Panel prices have stayed fairly steady, and projects they've built have generally produced high margins. You can see below that the result is a sharp rise in profitability. 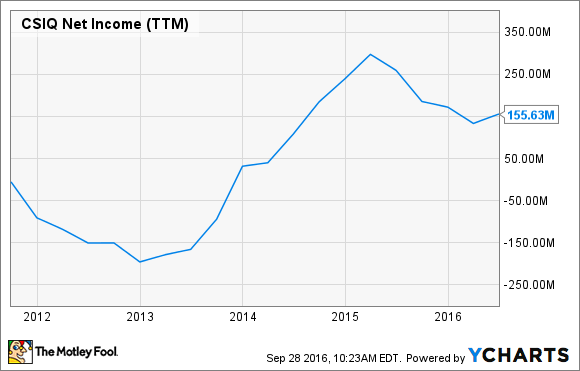 There's concern, though, for the second half of 2016 and into 2017. There's already been a sharp drop in solar panel prices in the market, which will hit Canadian Solar hard, because it has tripled capacity over the last three years to 5.4 GW, only to see prices plunge. If solar panel demand declines in 2016, as it likely will in the U.S. and China, Canadian Solar could have to idle brand-new manufacturing capacity.

What's more concerning is that Canadian Solar hasn't set itself up to compete on differentiation instead of price. That could be a missed opportunity in years ahead.

Falling behind on efficiency

The two factors causing a decline in solar panel prices today are a sharp drop in Chinese solar power plant construction in the second half of this year and an anticipated drop in U.S. solar power plant construction in 2017. As these are two of the largest demand markets in the world, the result is a big drop in pricing, and that will likely lead to Canadian Solar, Trina Solar (NYSE: TSL), and JinkoSolar (NYSE:JKS) all swinging to losses in the next year.

What's not expected to decline is the world's demand for residential and commercial solar panels, which aren't as susceptible to national policy swings as larger projects. But on smaller projects, the non-panel costs are a much larger percentage of the total project cost, meaning the efficiency of solar panels matters more.

A recent report out from EnergySage shows that customers are increasingly choosing higher-efficiency solar panels from LG, SunPower, and even Panasonic. And savings of a few cents per watt on panels from Canadian Solar or Chinese competitors won't sway many customers in that direction.

This isn't to say that Canadian Solar isn't trying to improve efficiency. Management has talked about the ONYX technology and its potential to get to 19%-efficiency cells by the end of the year. Mono PERC technology could get cell efficiency to 21%, but even that is 20% or more behind that of industry leaders. Plus, these technologies are only in small-scale production today and won't be a major driver of revenue for many years. And by then, the company may be bleeding money.

The small solar market may be a savior in 2017

Whether you're looking at Canadian Solar, Trina Solar, or JinkoSolar, the big missed opportunity of the last two years has been the focus on expanding commodity solar production and not on growing high-efficiency, differentiated production. With the price of solar panels dropping to levels that will make it difficult for solar companies to cover cash costs, there's no upside in commodity solar panels. The upside is in higher-efficiency products, and Canadian Solar isn't moving quickly enough into those markets in 2016.