Please ensure Javascript is enabled for purposes of website accessibility
Log In Help Join The Motley Fool
Free Article Join Over 1 Million Premium Members And Get More In-Depth Stock Guidance and Research
By Adam Levine-Weinberg – Sep 29, 2016 at 9:05AM

J.C. Penney (JCPN.Q) has come a long way since 2013, when it posted a pre-tax loss of nearly $2 billion. At that time, J.C. Penney -- like fellow mid-price department store operator Sears Holdings (SHLDQ) -- seemed to be on the road to bankruptcy.

Sears may be in a death spiral -- but J.C. Penney has avoided the same fate. Image source: The Motley Fool.

Now, it's on track to post a full-year profit (excluding special items) in 2016: J.C. Penney's first since fiscal 2011. This week, J.C. Penney got another vote of confidence, as the top bond rating agency boosted its credit rating by two notches. Yet investors still seem surprisingly pessimistic about its turnaround.

For much of 2013, J.C. Penney had a weaker credit rating than its perennially money-losing rival, Sears. However, since then, Sears has continued to lose market share while burning billions of dollars of cash. By contrast, J.C. Penney has capitalized on Sears' missteps to return to sales growth. Meanwhile, J.C. Penney has dramatically improved its cost structure.

On Wednesday, Moody's rewarded J.C. Penney for these efforts by boosting its corporate family credit rating from B3 to B1. The credit rating agency noted that the company continues to regain market share while reducing its debt burden and stated that J.C. Penney has room for further improvement in the next few years.

Last month, J.C. Penney executives laid out a plan that could potentially get the company back to investment-grade status by the end of the decade.

J.C. Penney has revealed a credible plan to continue its turnaround. Image source: The Motley Fool.

The centerpiece of these efforts is a plan to add $1.2 billion-$1.7 billion in annual revenue over the next three years. Keeping sales growing at a modest pace like this is critical for J.C. Penney. Doing so will allow the company to gradually leverage its operating expenses in order to increase its profit margin.

J.C. Penney expects the bulk of its sales gains to come from its enhanced beauty offerings (led by the expansion of its in-store Sephora boutiques) and from its new home initiatives (including its return to the appliance business and new partnerships to sell Empire flooring and Ashley furniture). If stiffer competition drives Sears out of business, J.C. Penney would have an even bigger sales growth opportunity.

By 2019, J.C. Penney expects to generate annual pre-tax earnings of $1.40-$1.55 per share. It will use its profits over the next several years to pay off nearly $1 billion of debt that comes due between now and 2019. That will put it in a much more sustainable financial position.

When will investors notice?

While J.C. Penney has gotten plaudits from credit rating agencies for its efforts to return to sales growth, improve its profit margin, and reduce its debt burden, investors have been harder to please. J.C. Penney shares did rally earlier this year. However, the stock is still far below where it was in mid-2013, when J.C. Penney was posting enormous losses. 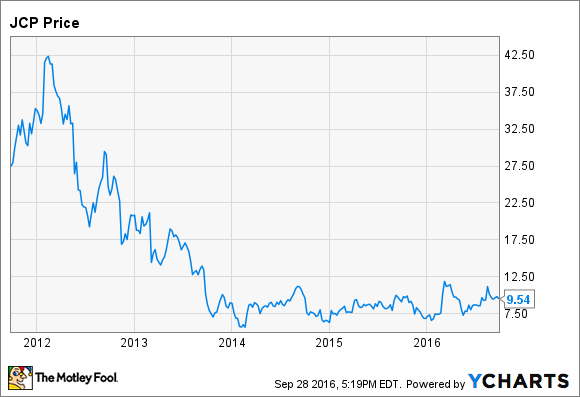 It's as if J.C. Penney isn't getting any credit for its miraculous turnaround. J.C. Penney stock sells for less than seven times the company's 2019 profit target, despite the potential for further outsized EPS growth beyond 2019 if its recovery continues.

To some extent, investors may be worried that J.C. Penney's turnaround will flame out due to the headwinds facing the department store sector. Additionally, it's true that there's a difference between producing enough cash to pay creditors and earning sufficient returns to reward equity investors.

However, J.C. Penney has met virtually all of its financial targets since 2014 and it has a clear plan -- backed by data -- to meet its 2019 financial goals. If it follows through, J.C. Penney shares could rocket higher over the next three years.

Adam Levine-Weinberg owns shares of J.C. Penney. The Motley Fool recommends Moody's. Try any of our Foolish newsletter services free for 30 days. We Fools may not all hold the same opinions, but we all believe that considering a diverse range of insights makes us better investors. The Motley Fool has a disclosure policy.