One difficult aspect for investors is to determine whether a company and its stock are a falling knife, something we strive to avoid, or a great value worth starting a position in. The markets get a lot of things right, but they also miss the mark occasionally and when investors can find wrongfully hated stocks it can lead to some great portfolio returns. Here are two overly hated stocks that could bounce back and offer investors a dividend yield of about 3% in the meantime.

Polaris Industries Inc. (NYSE:PII) has had a year to forget, and that's putting it nicely. Not only has the company dealt with disruptions in its painting plant roughly a year ago, but it's also dealt with energy sector headwinds that have pinched demand for some of its products.

Then, earlier this month, the company announced its full-year earnings would be in the range of $3.30 to $3.80 per share -- that's $2.50 to $2.70 lower than previously expected. The cause of that staggering reduction was Polaris experiencing additional RZR thermal-related issues which caused a more complex and expensive repair solution than initially thought.

At this point, with shares trading nearly 50% lower since the beginning of 2015, and 38% lower over the past twelve months alone, investors have to ask if this is a big speed bump or a falling knife to avoid? On the positive side of things, before troubles popped up over the past year, Polaris had consistently and impressively increased its top and bottom lines. 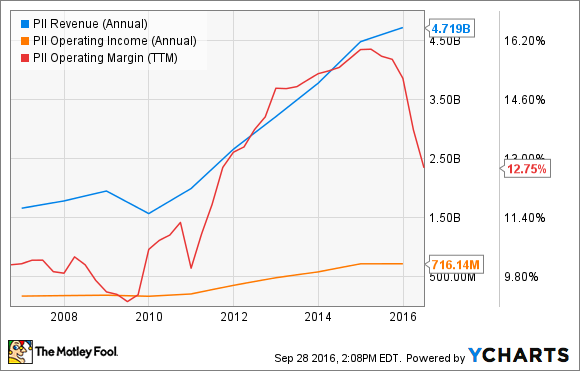 Don't get me wrong: Polaris' more expensive RZR issue is a big deal, and investors aren't happy. However, while its margins have taken a hit recently, that should be a temporary issue that will correct after the RZR issue is wrapped up and Polaris' new facilities in Alabama and South Dakota should continue to sustain higher operating margins. Thanks to Polaris' innovation with its Slingshot, and the resurgence of its Indian motorcycle brand, among other factors, the company has outgrown the competition in value per dealership over the past half-decade: 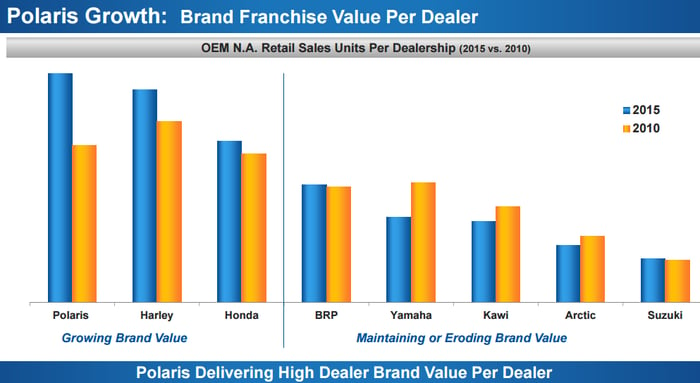 The upside with Polaris is that its growth story is likely to come from multiple angles. It's still leaning out its operations to boost margins, it's focusing on expanding into adjacent markets, and perhaps the most important is international expansion. Consider that the U.S. market currently generates a little more than 75% of Polaris' total sales, through the first half of 2016, but that means the international opportunity is ripe for the picking.

Even amid economic uncertainty, Polaris has grown its revenue in Brazil and Russia by more than 70%, with India and China checking in 20% and 17% higher, respectively. Polaris has had a rough year, no doubt, but this should just be a speed bump, albeit a big one, before the company resumes its consistent top- and bottom-line growth. It could take some time to recover from the RZR issue, and for its international growth story to move the needle, but Polaris will at least offer investors a dividend of $2.20 per share annually, a yield of 2.97%, while waiting for that thesis to unfold.

It seems many retailers have been beaten down mercilessly over the past year, and Williams-Sonoma Inc. (NYSE:WSM) has seen its fair share of pain, with its stock price trading 35% lower over the past twelve months. Similar to Polaris, the company softened its outlook for the remainder of 2016 with sales estimates dropping slightly from $5.2 billion down to roughly $5.15 billion, operating margins contracting by about 30 basis points and reducing the earnings-per-share midpoint from $3.58 down to $3.45. With that said, let's take a look at what Williams-Sonoma does, and why it could bounce back.

Williams-Sonoma is a leader in a fragmented home furnishings segment with multiple brands investors will likely recognize. Those brands include Pottery Barn, which generated 42% of company revenues during 2015, and its namesake Williams-Sonoma, which accounted for 20% of revenue, as well as West Elm, Pottery Barn Kids, PBteen, and others.

What's compelling about Williams-Sonoma, at a time when many retailers are struggling to adapt to the boom in e-commerce, is that the company has a proven track record. Last year, Williams-Sonoma generated its entire revenue evenly between online and brick-and-mortar stores, and its e-commerce sales have grown at an impressive 27% compound annual growth rate. 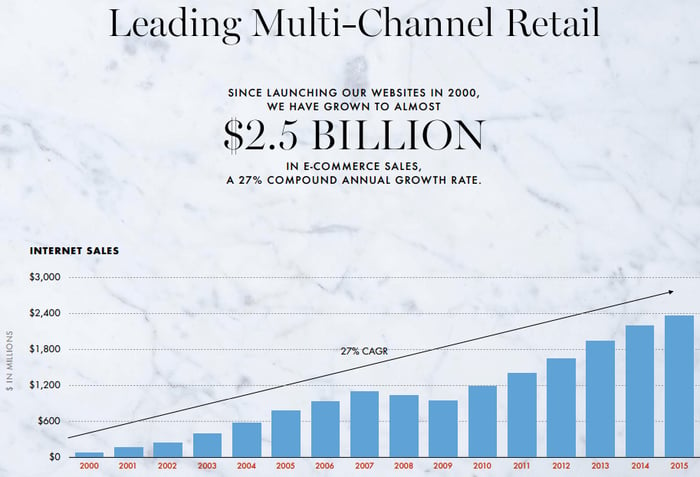 The company's success in e-commerce is valuable as its e-commerce EBIT margins are roughly double that of brick-and-mortar retail stores. Management still believes there's some operating margin left on the table which it will gain as it improves its supply chain and inventory management in the years ahead. Also, the company plans to focus on growing its international presence as well, which has grown to account for 6% of total revenues last year, compared with only 3% in 2010.

There are drawbacks, of course. With fewer barriers of entry to e-commerce, competition could follow and pressure its healthy e-commerce margins. Investors also have to accept the risk that comes with Williams-Sonoma's recent venture into the hotel business, which seems like a hit-or-miss type of growth strategy. And Williams-Sonoma could take a hit if housing markets slow, as new homeowners represent a large portion of purchases.

Ultimately, while Williams-Sonoma has been sold off thanks to recent guidance softness, there's too much to like about the company's brands, and investors' concerns should be offset with the company's potential to optimize margins and expand internationally. And hey, Williams-Sonoma will pay investors an annual dividend of $1.48 per share, a yield of 2.97%, while you wait for the growth story to play out.