$1,000 might not seem like enough money to invest in the stock market. But in a previous article, I noted that well-timed investments of $1,000 in Apple or Amazon (NASDAQ:AMZN) would each be worth about half a million dollars now. Today, I'll go a step further and discuss two stocks that turned $1,000 into several million dollars over several decades.

Granted, $1,000 in 1957 is equivalent to about $8,500 in today's dollars. Nonetheless, an $8,500 investment that blossoms into a $2.55 million one reveals the market-crushing potential of investing in well-run companies over the long term.

It also demonstrates the value of patience. In the 1960s and 1970s, Disney was one of the "Nifty 50" stocks which were considered solid "buy and hold" investments and fueled the bull market in the early 1970s. But when the bear market hit later that decade, Disney and the rest of the Nifty 50 were aggressively sold off. The House of Mouse then languished for years as theme park attendance waned and the company's family friendly movies saw big box office declines.

Disney only recovered after Michael Eisner, the former CEO of Paramount, took over as CEO and had the company acquire Touchstone Pictures, Capital Cities ABC, ESPN, and other higher-growth media properties to become a media powerhouse. Eisner also oversaw the "Disney Renaissance" between 1989 and 1999, which saw the House Of Mouse release hit animated films like The Little Mermaid, Beauty and the Beast, Aladdin, and The Lion King. Eisner's successor, Bob Iger, further expanded Disney's media empire with the acquisitions of Pixar, Marvel, and Lucasfilm.

Today, Disney faces fresh headwinds, with cord cutters threatening to derail its cable TV business. But Disney continues evolving to face these challenges with new streaming platforms and investments in "new media" companies -- indicating that it could still have room to run.

Like Disney, Wal-Mart was a member of the Nifty 50 that initially soared but faced tough challenges during the bear market of the mid-1970s. But as Wal-Mart spread across America and other countries with its superstore format, it drove smaller competitors out of business with economies of scale. As a result, its annual revenues rose from $1.3 billion in 1980 to $165 billion in 2000.

Wal-Mart didn't face any significant challenges until Amazon evolved from an online bookseller into an online superstore in the late 1990s. The company failed to keep up in online sales, and its sales growth fell far behind Amazon's. 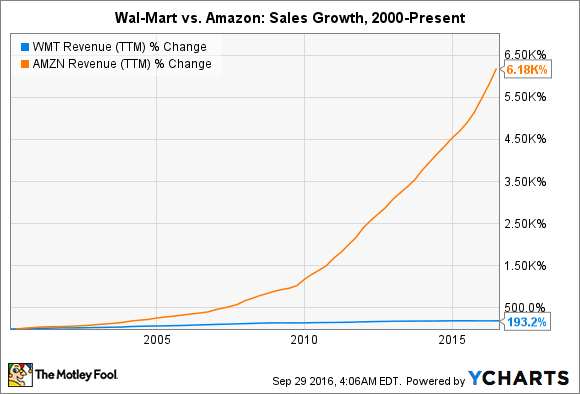 CEO Doug McMillon, who took over the top job in 2014, is trying to reinvent the massive retailer with billions of dollars in investments in e-commerce, employee training, and higher wages. The jury's still out on those efforts, and analysts expect Wal-Mart to post just 1% sales growth this year. But if they pay off, Wal-Mart's sales growth might pick up over the next few years.

The growth of Disney and Wal-Mart over the past few decades reaffirms Benjamin Graham's famed statement: "In the short run, the market is a voting machine; but in the long run, it is a weighing machine." Therefore, long-term investors who want to turn thousands into millions should analyze a company's growth potential in decades instead of quarters.