Please ensure Javascript is enabled for purposes of website accessibility
Log In Help Join The Motley Fool
Free Article Join Over 1 Million Premium Members And Get More In-Depth Stock Guidance and Research
By Leo Sun - Dec 20, 2015 at 11:50AM

What is Vice?
Vice was founded in 1994 as a punk magazine. Over the past two decades, the company invested heavily in online video and content to evolve into a multi-platform media giant. Its network mainly creates content for millennials, and includes Vice.com, Vice News, a TV and film studio, a record label, and a book publishing division.

Disney isn't the only media giant interested in Vice -- 21st Century Fox (FOX) also bought a 5% stake in the company back in 2013. Vice says that it will use those invested funds to finance its programs and expand internationally. Unlike many other "new media" outlets, which aggregate content from other sites, Vice produces a large amount of original content.

Some of that content is considered "edgier" than traditional social news content. Last year, Vice columnist Molly Crabapple confronted Donald Trump in Dubai about allegations that the workers who built his luxury villas were only paid $200 per month. Earlier this year, two Vice journalists were jailed in Turkey after filming clashes between the police and youth members of the pro-Kurdistan Worker's Party.

Distributing this content across multiple digital platforms means that Vice is a bet on the Internet displacing TV as a primary source of news consumption. The Vice Digital Network currently reaches over 200 million unique visitors per month. 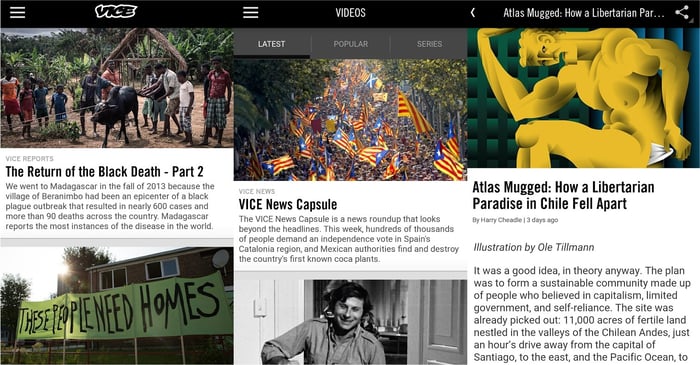 How will Vice help Disney?
Disney's most vulnerable spot is its cable TV business, which generated 32% of its revenue and 46% of its operating income in fiscal 2015. Although the cable unit's revenue climbed 10% annually and its operating income rose 5% last year, Disney has been losing domestic subscribers at core cable networks like ESPN, Disney Channel, and ABC Family. That loss of users has been attributed to cord cutting and a shift toward streaming-only services.

In response, Disney has been expanding ESPN to PCs and mobile devices to reduce its dependence on cable TV bundles. To retain more younger viewers, it's been adding more e-sports programming to Disney XD. For millennials, Disney is integrating Vice's Digital Network into A+E Networks, which it jointly owns with Hearst Corporation. Starting next year, Vice will replace A+E's H2 history channel with its own channel, Viceland. A+E owns more than 15% of Vice, which is considered a separate investment from Disney's stand-alone 10% stake.

Between fiscal 2014 and 2015, H2's subscribers have held steady at 70 million. ESPN, the Disney Channels, ABC Family, and A+E all have over 90 million subscribers. Viceland could attract new subscribers and offset losses elsewhere across Disney's cable empire. If Viceland is successful, it's likely that Disney will offer Vice other new channels under its own umbrella instead of A+E's.

The growing importance of "new media"
Disney and Fox aren't the only companies investing in new media companies to counter cord cutters. Earlier this year, Comcast's(CMCSA -0.26%) NBCUniversal invested $200 million in Vox Media, the online publisher of The Verge, Re/code, and Eater. It also invested $200 million in social news site BuzzFeed. Comcast invested in these companies because cord cutters are hurting both its cable business and NBCUniversal's cable and TV divisions.

These moves all indicate that a major market consolidation between old media, new media, and pay TV companies will likely occur in the near future. When that happens, companies like Disney that have strategically pivoted away from cable-only channels will likely outperform their rivals.