If you're a dividend investor, then you should consider owning shares of JPMorgan Chase (NYSE:JPM). There are multiple reasons that the nation's biggest bank by assets is a good stock for dividend investors.

The first is that JPMorgan Chase's shares yield more than the average stock. Its investors, therefore, get a larger check each quarter relative to the price of their shares than they would get by investing in a stock with an ordinary yield.

The story is similar, though not to the same extent, if you look at other major bank stocks. The average yield on the KBW Bank Index, which tracks 23 of the biggest banks in the country, is 2.5%.

When a stock yields more than the broader market, or more than other stocks in the same industry, the first thing to check is if the company pays out a larger share of earnings each year than its peers do.

It isn't necessarily bad if that's the case, but it would explain why the yield is higher. A stock with a high payout ratio, moreover, has less room to raise its dividend going forward.

Let's say, for instance, that a company pays out only 30% of its annual earnings each year. That leaves plenty of space to increase the payout. But if the company already distributes 90% of its net income to shareholders, there's a limit to how much more that can grow.

JPMorgan Chase distributes 34% of its earnings. That's right in line with other blue chip bank stocks. The median stock on the KBW Bank Index sports a payout ratio of 34%.

While JPMorgan Chase's payout ratio is thus on par for big bank stocks, it's nevertheless low enough to allow JPMorgan Chase to consistently grow its payout in the future.

A history of dividend raises

Just because a bank has a reasonable payout ratio doesn't mean that it will, in fact, boost its dividend on a regular basis. The best way to determine this is to look, instead, at a bank's history of doing so.

The chart that shows this in JPMorgan Chase's case seems, at first, to be all over the board. Prior to the financial crisis, it paid out around $0.35 per share each quarter. That dropped to $0.05 per share when the crisis struck, fueled by the need to boost capital and satisfy regulators that the bank had enough fire power to survive the downturn. 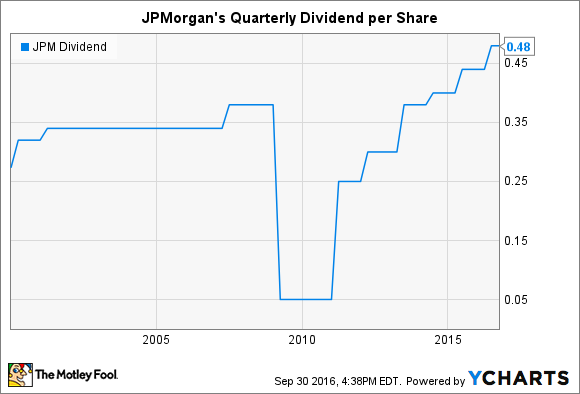 But the important thing to take away from the chart isn't what happened during the crisis, it's rather what has happened to JPMorgan Chase's dividend since then. Namely, the $2.5 trillion bank has raised it every year since 2010, bumping it up most recently to $0.48 per share.

The net result is that JPMorgan Chase not only yields more than the average stock, while paying out a similar share of its earnings, but the New York City-based bank has also demonstrated convincingly that it's committed to raising its dividend on a regular basis, if not yearly.

It's for these three reasons, then, that I believe JPMorgan Chase is a good stock for dividend investors.