Medicare only goes so far. if you're trying to free up money in your monthly budget, consider these healthcare cost-savings tips. 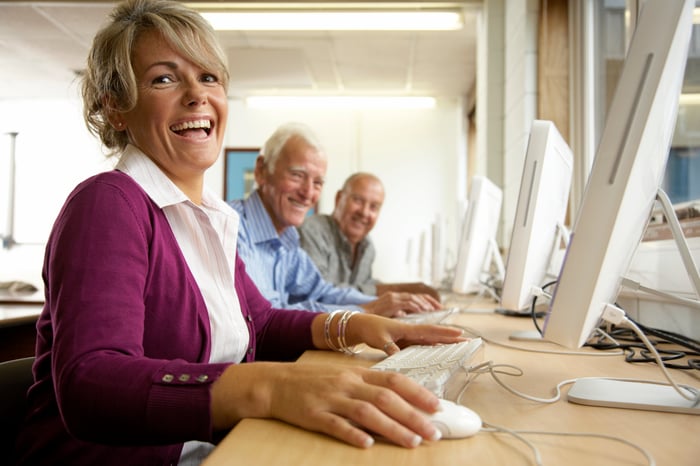 If you're a retiree worrying over the high cost of healthcare, you're not alone. Healthcare costs are increasing faster than prices for other goods and services and that's taxing seniors, especially those who are relying heavily on Social Security income. In the past year, medical costs are up 4.9%, yet Social Security income is unchanged. Therefore, rising costs are pressuring retiree budgets. To relieve some of that pressure, consider these money-saving tips. They may just help you stretch your healthcare dollars further in 2017.

Capitalize on a younger spouse

If your spouse isn't signed up for Medicare yet and he or she is insured via a high-deductible health insurance plan, consider the benefits associated with your spouse establishing a health savings account, or HSA.

Although you can't contribute to an HSA once you're on Medicare, your spouse can. In 2017, your spouse can contribute up to $7,750 to an HSA account ($6,750 plus a $1,000 catch-up contribution) and as long as that money is used for your qualified medical expenses, it will be tax free.

Unused money in an HSA can be rolled forward into future years, too. That means that an HSA can reduce the risk of needing to draw down taxable retirement savings, such as traditional IRAs, for future healthcare expenses. HSAs can also allow more money to grow tax-deferred for heirs. It can prevent IRA withdrawals from spiking your income and causing your future Medicare Part B premiums to be subject to income-related premium adjustments, too.

Prepare for the future

Baby boomers are living longer than ever before and while that's great news, it also means that more baby boomers will require long-term care at some point during their lifetime.

Unfortunately, long-term healthcare is outlandishly expensive, and in most cases it isn't covered by Medicare.

A home health aide or assisted living can cost $3,800 per month and a semi-private room in a nursing home can cost $6,800 per month, according to Genworth Financial.

Moreover, while Medicaid can pay for long-term care, qualifying for Medicaid means spending down virtually all of your savings and Medicaid can put a lien on your home to recoup any expenses incurred on your behalf.

Medicare Part A and Part B plans provide a vital safety-net for seniors, but they don't pay all of a retiree's healthcare expenses.

Part B pays for basic healthcare services, such as doctor visits and lab work, but it also requires a small annual deductible and 20% patient cost-sharing. Neither Part A or Part B cap the out-of-pocket spending for recipients in a given year, either.

Since no one knows when an illness or an injury may strike and Medicare has "gaps" in its coverage, it could pay-off to purchase a Medigap plan. There are 10 different types of Medigap plans and each offers slightly different coverage. The most common plan chosen by retirees is Medigap Plan F, which is the most comprehensive.

The coverage that's provided to original Medicare recipients by Plan F has to be the same from insurer to insurer, but prices of these plans vary depending on which premium calculation method is used by the insurer. For example, Medigap Plan F premiums in New Hampshire range between $173 and $357 per month. That's a pretty big range, so make sure to shop around.

Dig into the details

Medicare Advantage and Part D plans are offered by private insurers and that means your insurance coverage provided and premiums can change significantly from year to year.

If your plan premium is set to increase in 2017, now's a great time to take a look at your other options. When you do, pay particular attention to whether or not any changes have been made to how your insurer will cover the cost of your medications.

How much you pay for prescriptions depends on where medicines are placed within insurer's drug tiers. New drug approvals and negotiated discounts can lead to that placement changing every year. Insurers are also turning increasingly to coinsurance from flat-rate co-payments for prescriptions, which can cause your drug costs to spike.

To avoid unwelcome surprises at the pharmacy counter, compile a list of all your medications and then dive into the details of the various plans available to you. Doing so could end up saving you more money.

If you've been relying on the same pharmacy for years, you might want to call around to check prices charged by competitors. Some big box retailers, including Costco and Wal-Mart offer special prices on many generic drugs.

A Consumer Reports study of prices of popular drugs found that Costco had the lowest cash prices overall, so that may be a good place to start. Another option is to visit GoodRx.com, an online website that provides local price information as well as coupons. Paying for your prescriptions, rather than running them through your insurance, could end up saving you a bundle.

Similarly, you may be able to reduce your out-of-pocket Part B expenses by shopping around for healthcare services. For example, in-store healthcare clinics can provide less costly care than an emergency room visit for non-emergencies that happen outside of doctor's hours.