The stock market has pulled back a bit from its record highs, but stocks overall still look rather expensive. Fortunately, there are a few exceptions. Here's why now might be an excellent time to get into Whirlpool (NYSE:WHR), Five Below (NASDAQ:FIVE), and Dollar General (NYSE:DG), three excellent companies that happen to be on sale right now.

A home appliance giant at a low P/E

Whirlpool, the world's largest home appliance manufacturer, markets its products under several well-known brand names, including Maytag, KitchenAid, Amana, and its own Whirlpool name. In fact, Whirlpool has seven different brands that each produces over $1 billion in annual revenue.

First, the bad. Sales growth of 3% as of the latest quarterly report isn't all that impressive to shareholders. Also, since the company sells its products all over the world, it has been susceptible to currency headwinds, and some of its key international markets, such as Brazil, are weak right now. However, margins have improved, and the company's shareholder-friendly buyback program has produced pretty impressive earnings growth.

Despite any near-term challenges, there are a few reasons I love Whirlpool for the long term. For one thing, market-leading companies have several key advantages, including economies of scale, brand recognition, and more. This makes Whirlpool less susceptible to economic weakness than its peers. Plus, its huge portfolio of brands allows it to target several different areas of the appliance market -- for example, the company is trying to market its KitchenAid brand to older homeowners.

Additionally, Whirlpool is cheap, trading for just 14.2 times trailing-12-month (TTM) earnings, an insanely low valuation considering that the company has grown at a 13.1% annualized rate over the past five years, and analysts are projecting even better 13.4% growth over the next five years.

Rapidly growing retail at a discount

Five Below is a low-priced retailer, selling all of its products for $5 or less (hence the name). The company has been successful at targeting younger consumers -- teens and pre-teens -- selling products such as sporting goods, games, fashion accessories, bath and body products, snacks, decor, and DVDs, just to name a few.

In its relatively short history as a public company (IPO in 2012), Five Below has grown rapidly. Since mid-2013, its store count has nearly doubled, with more than 60 new stores opened in each of the last three years. Five Below is targeting 2,000 locations over the long term, and given the current growth rate, this doesn't seem too far-fetched at all.

The financial results have been impressive as well. Revenue has grown from $125 million in the 2010 fiscal year to $832 million for 2016, and is expected to top $1 billion for the first time in the 2017 fiscal year (ending Jan. 31, 2017). Analysts expect Five Below to grow at an outstanding 23.6% rate over the next five years, and if the company ends up meeting its ambitious growth targets, the current price may end up looking extremely cheap.

The fastest-growing kind of retail

A close cousin of Five Below's business model, Dollar General is another deeply discounted retailer selling at a bargain price. Dollar General sells most items in its store for $10 or less, and operates the majority of its locations in communities with relatively low populations. The main idea is that since Dollar General is the closest option to many customers who don't live in areas with lots of retail options, this gives the company an advantage when it comes to customer loyalty.

Thanks to weaker-than-expected earnings results for the second quarter, Dollar General's share price has pulled back considerably over the past month or so, and the company now trades for just 16.2 times TTM earnings -- extremely attractive for a company that's expected to grow at a 13.7% rate over the next five years.

Which one to buy?

All three of these stocks are considerably cheaper than they were a few months ago, as you can see in the chart below. 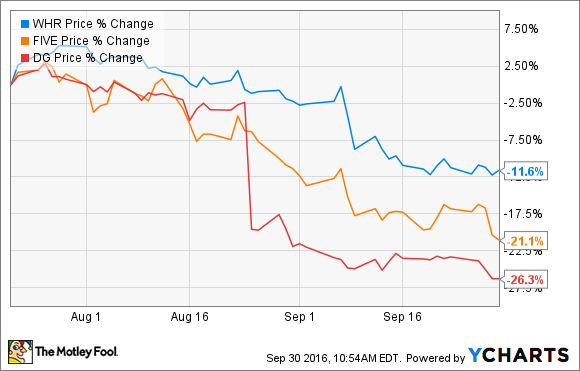 Of the three, Whirlpool is obviously the most established and, in my opinion, will be the most predictable and stable of the three going forward. The other two companies are growing rapidly, and have the potential to deliver some outstanding returns as they mature. Having said that, all three of these stocks are trading for pretty attractive prices right now, and investors who scoop them up while they're on sale should do pretty well over the long run.