For the past couple of years, Apple, Inc.'s (NASDAQ:AAPL) iPad product cycles have been a bit unpredictable. The company shifted away from annual releases a couple years ago, presumably because Apple realized that tablet upgrade cycles are longer and frequent redesigns and refreshes weren't as necessary. For instance, Apple only launched the 12.9-inch iPad Pro at its September 2015 event, alongside a refreshed iPad Mini 4 with internal spec bumps.

Well, we could be in store for as many as three new iPads launching within a matter of months.

The 12.9-inch model is said to get a beefier 12-megapixel primary camera, alongside a True Tone display and wider color gamut like the one found in the newer 9.7-inch iPad Pro that launched earlier this year. The same is expected for a 7.9-inch iPad Pro, which would bring the Mini up to Pro specs, as well as add the four-speaker stereo sound system.

Perhaps more interesting is the news of a possible 10.1-inch iPad Pro, which would represent a modest increase from the 9.7-inch display that Apple has always offered for the iPad, starting with the original. If true, this device would see a small increase in size in order to accommodate a larger display.

All three tablets are expected to keep the 3.5-mm headphone jack for now, unlike the iPhone 7 and 7 Plus. The news follows a similar report in August from KGI Securities analyst Ming-Chi Kuo that predicted the mid-sized model would increase to a 10.5-inch display.

The big push into enterprise tablet sales by targeting professional users seems to be paying off, so it makes plenty of sense why Apple may be doubling down on its Pro efforts for the iPad. Investors have been watching the iPad business decline for several years, as the upgrade priority is lower, which is why the upgrade cycles are longer than Apple initially expected.

The good news is that the year-over-year declines are slowly improving, and last quarter's negative 9% growth was the best performance in two years. 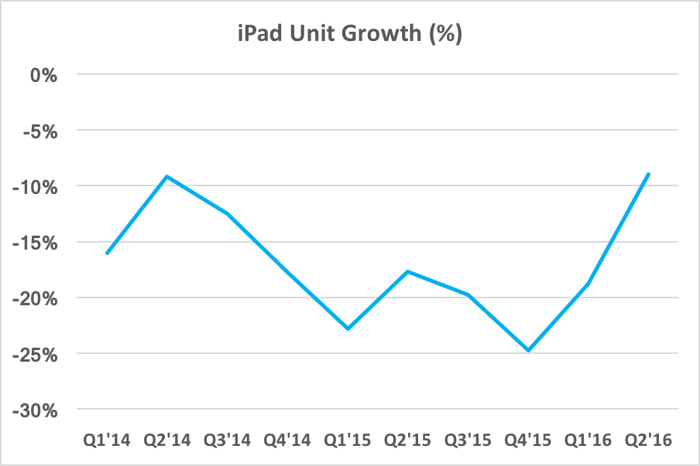 It's harder to know where the saturation limit is for the tablet market, since many people will decide that they don't need or want one. Roughly half of U.S. adults own a tablet, according to the Pew Research Center. In contrast, smartphone penetration in the U.S. is now around 80%, according to comScore.

But the enterprise market still has a long way to go, which is precisely why Apple just partnered up with Deloitte to help sell more iOS devices there. Who knows, maybe we'll even see iPad units grow again in the near future.

Apple, Inc. Could Have 3 New iPads Up Its Sleeve @themotleyfool #stocks $AAPL Next Article
Current