The U.S. Postal Service has used the same boxy delivery trucks for the past 30 years, but after extending their life for six years beyond their original expiration date, the mail delivery vehicle is about to get a major upgrade. The USPS said it has narrowed the field of finalists for designing the next-generation prototype from 15 companies down to six, and the winner will receive a multibillion-dollar contract.

And then there were six

The Postal Service realized in January 2015 that it was going to need new trucks, as the current fleet would not last beyond 2017, and 142,000 vehicles out of its total 190,000 delivery trucks have well exceeded their 24-year life span by six years. It issued a list of "prequalified" candidates that included Ford, General Motors, and Nissan, among others, and last October issued a request for proposals (RFP). 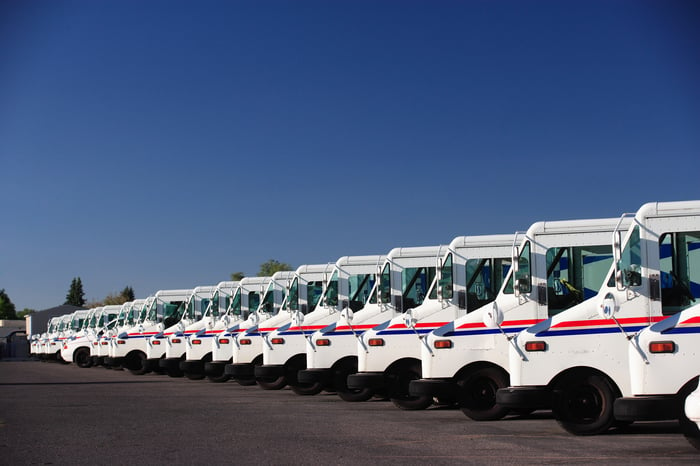 The iconic mail delivery truck will be updated and upgraded under a new design competition being run by the USPS. Image source: Getty Images.

From the list of 15 contenders, the USPS said last week it had whittled the finalists down to just six, with none of those big-name manufacturers making the cut. Instead, the short list includes:

The eventual winner will be determined by who is able to best meet the criteria set out in the RFP. Among the design considerations the USPS is looking at are hybrid and new technologies, including alternative fuel capabilities, different sizes, and advanced powertrains.

Although the current delivery truck has become an iconic fixture on the delivery route, it has outlived its usefulness. Built by Northrop Grumman and placed into service in 1987, the Grumman Long Life Vehicle was supposed to have a lifespan of 24 years, but that was extended to 30 years in 2009, and the time has come to replace it.

The USPS says it's looking to reduce its maintenance costs over the life of the vehicle, which it says must be a minimum of 20 years. In particular, it wants the manufacturers to consider items such as easy repair or replacement of certain large body parts that are subject to the most damage; remote locking and ignition capabilities; and heating and cooling capabilities that factor in the amount of opening and closing the vehicle's doors endure, that the windows are often open, and that the cargo area must be unheated.

Of equal importance is the size and weight of the vehicle. The RFP said the truck has to hold at least 1,500 pounds and have at least 155 cubic feet of cargo space, suggesting the USPS is looking to the future and seeing the impact e-commerce is having on the types of packages online sellers are shipping.

The postal service says it wants the six companies to design and deliver a total of 50 vehicles within one year -- half of which will feature new technologies -- after which the USPS will put them through their paces for six months before selecting one winner.

Each of the finalists, which are getting contract awards valued at $37.4 million, will also be able to partner with subcontractors to help build their prototypes. For example, VT Hackney has subcontracted production of the vehicle chassis and powertrain to electric truck maker Workhorse Group. Karsan has partnered with REV Group, a manufacturer of specialty vehicles such as RVs, buses, ambulances, and fire trucks. Whichever company is selected will be awarded a $6.3 billion contract.

Might Hackney have a leg up? Its partner Workhorse Group has developed an electric delivery truck that incorporates a drone docking station on the vehicle. When the truck gets to the delivery route, the drone -- an eight-propeller vehicle called the HorseFly -- can then be used to deliver packages using GPS to the recipient's house. It's a combination that conceivably could save the Postal Service time and money, and ultimately reduce maintenance costs.

A $6 billion contract could change the fortunes of any of these companies. Oshkosh, for example, generated $6 billion in sales for all of 2015, while Spartan had sales of $550 million for the full year, with its delivery and service vehicle segment generating revenue of just $227 million. To say the least, winning the U.S. Postal Service contract would be transformational for any of them.