Over a century old and recognized the world over, International Business Machines (NYSE:IBM) is the quintessential blue-chip stock. Even its nickname, Big Blue, conjures images of the company's vaunted history among America's business elite.

IBM's history contains far more wins than losses; a company couldn't exist for over a century otherwise. However, the current threats facing the company suggest that IBM's stock history is far more complex than it might seem. Here's a look at several important market metrics for IBM's stock:

With the S&P 500 currently trading at a P/E of almost 25, investors should ask why IBM, which 26 sell-side analysts cover, trades at so significant a discount to the market. The answer speaks to a nuanced truth within IBM's stock history.

IBM's corporate and investing history comes in several distinct phases -- not surprising for a company its age.

International Business Machines traces its roots from the remnants of several companies dating to the 1880s. Business was conducted business under the name Computing-Tabulating-Recording Company, or CTR, until the current moniker came into use in 1924. Along the way, CTR hired a 40-year-old executive named Thomas J. Watson Sr. to help manage the company's rapid expansion. He ran the company from 1914 until his death in 1956.

Under Watson, IBM pushed headlong into the market for tabulating machines just as the market exploded. During his tenure, IBM grew from a company with 1,346 employees and $9 million in sales in 1914  to 72,504 employees and $892 million in revenue in the year of his death. His son, Thomas J. Watson Jr., took the reins after his father's death.

As the market for tabulation machines gave way to the computing revolution, Watson Jr. steered IBM's business toward mainframe computing, a move with immense benefits for the company. When Watson Jr. transitioned out of active management in 1971, IBM had grown to 258,662 employees and $7.2 billion in annual revenues.

The following years saw mainframe computing give way to personal computers, and IBM played a central role in the early part of the PC business. It first battled with the then-ascendant Apple and eventually lost the PC wars to the likes of Apple, Microsoft, Intel, Compaq, Dell, Hewlett-Packard, and others. Instead, IBM doubled down on enterprise IT services to great success, under the leadership of CEOs Louis Gerstner  and Sam Palmisano, Gerstner's protege.

By the time Palmisano ceded leadership to current CEO Ginni Rometty in October 2012, the technology industry was in the midst of its current mobile-and-cloud renaissance and IBM found itself in another make-or-break transition period. That's where it still finds itself today.

Can this elephant still dance?

IBM missed the boat on the ongoing revolutions in mobile and cloud computing, and it's been scrambling to adjust to the changing technology landscape ever since. Revenue has now declined in 17 consecutive quarters.  Its failure to foresee the structural changes in enterprise IT also helps explain why IBM stock has underperformed the S&P 500 by roughly 75% since Rometty became CEO. 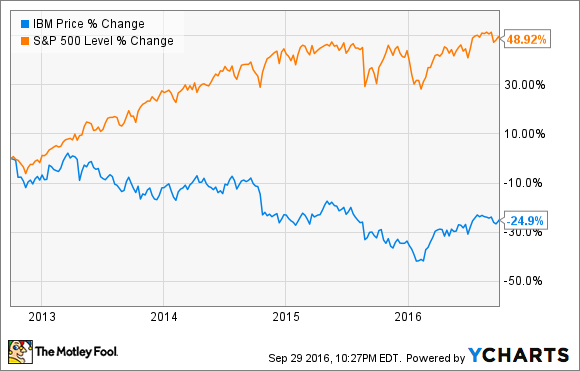 But the blame lies with past leadership as much as with Rometty. A company as large as IBM takes years, not quarters, to reconfigure its revenue mix. Even so, some observers think the company has seemed too slow to respond. The good news is that some green shoots from Rometty's current plan may finally be emerging. 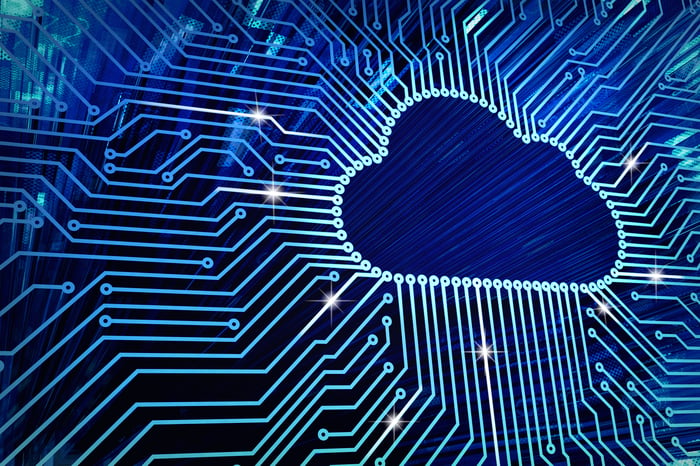 Today, though sales and profit declines from its legacy businesses continue to place downward pressure on overall results, IBM has seen impressive growth in business segments it has dubbed as "strategic imperatives" -- cloud computing, artificial intelligence, data analytics, mobile, social, and security. Last year, strategic imperatives accounted for about 38% of IBM's total revenue, and the combined businesses continued to grow in Big Blue's most recent quarter, rising 12% year over year.

IBM's stock is tantalizingly cheap at 12 times earnings, particularly for a company that has grown its dividends annually for 16 consecutive years. The company faces competition in many of the markets that make up its strategic imperatives -- Amazon.com dominates cloud computing, for example. However, given the company's immense financial resources and research prowess, it seems unlikely IBM will fade into irrelevance any time soon, making it an interesting option today for investors willing to hold IBM stock over the long term.