Fast-food chain Sonic may see its boom go bust if industry trends continue, but it could be worse for rivals such as McDonald's, which has been trying to turnaround flagging sales. Image source: Mike Mozart via Flickr.

Drive-in restaurant operator Sonic (NASDAQ:SONC) has posted positive quarterly comparable sales growth for three years straight. Except for a single quarter three years ago, when same-store sales came in flat, the fast-food restaurant has managed to buck the trend seen at other chains and has notched higher comps in 28 out of the past 30 years.

But the quick-serve leader just said its fourth-quarter results will break that streak, as it expects comps to fall 2% for the period, and while every business will stumble once in awhile, that news should be especially worrisome for rival McDonald's (NYSE:MCD), because it's trying to put together its own string of four consecutive quarters of comps growth.

If one of the best-performing fast-food chains is struggling, can trouble be far behind for those restaurants not as well off? 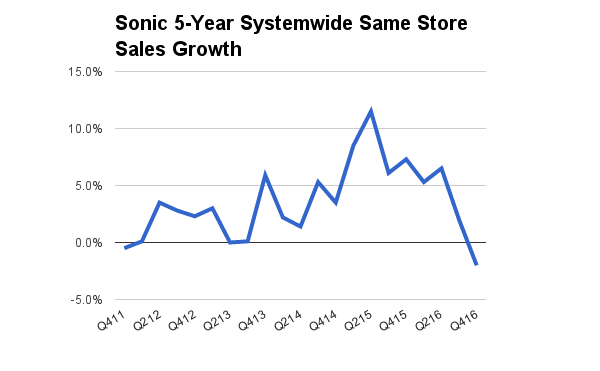 Where McDonald's, Burger King, and Yum! Brands (NYSE:YUM) chains KFC, Pizza Hut, and Taco Bell all began offering healthier menu options to their customers, Sonic reveled in its image as a place to enjoy artery-clogging burgers, hot dogs, fries, and shakes. Sure, you could get a grilled chicken sandwich if you wanted, but good-tasting fried and greasy options are what really drive its sales.

Despite its pursuit of millennial diners and offering all manner of fancy foods, McDonald's was only able to engineer a turnaround after it began offering its all-day breakfast promotion. It broke a two-year skein of falling quarterly comparable sales, recording three quarters of growth, and would like to do it once more when it reports earnings next month.

But that might not happen. Although McDonald's earnings beat analysts' expectations last quarter, U.S. comps rose just 1.8% compared to forecasts of better than 3% growth, and globally they were up only 3.1%, versus the analyst consensus of 3.6%. Much of the gains the burger shop has enjoyed in same-store sales has been the result of price increases, not more customer traffic, which has remained persistently negative.

While comps strip out sales gains made from simply opening more stores, a restaurant can also report higher same-store sales if it just raises its prices, even though traffic is lower. That's what's been happening at McDonald's and many other chains lately as a result of higher commodity costs. Their comps grew, but there was still underlying weakness in their operations.

The tide is running out

Now that food prices are falling -- even beef is well off the record levels it sold for -- and gas prices have settled, restaurants can't take pricing as they did previously, and it just might expose the fragile foundation many chains were standing on.

Shares of Buffalo Wild Wings (NASDAQ:BWLD) have fallen 25% over the past year as comparable sales fell after many years of growth, in part because of the higher prices customers found on its menus. Even though B-Dubs saw the cost of chicken wings fall year over year, it still raised prices by more than 3%.

Of course, it's not just commodities that affect menu prices, as restaurants also have labor costs and chains, including McDonald's, have voluntarily raised wages for their workers. Those higher costs also trickle down to the menu.

Food price deflation is allowing consumers to save money by buying food at the grocery store and staying home, rather than go out to a restaurant. NPD Group says fast-food restaurants, which comprise 80% of total industry traffic, saw foot traffic go flat in the second quarter after being up a paltry 1% in the first quarter. It also found drive-through traffic over the past four years fell by 128 million visits, while delivery has grown by 69 million visits.

That's a worrisome trend for McDonald's, which generates about two-thirds of its sales from the drive-up window. Soft traffic in its stores at the same time customers are ordering delivery or buying from the grocery stores is a combination that could weigh on results.

Because Sonic's boom may be going bust with the rest of the industry, investors ought to be worried that McDonald's three-peat of higher comps growth is going to come to an end, too.