Before Tesla Motors (NASDAQ:TSLA) announced its vehicle deliveries for Q3, it was clear the metric would hit a new high. The big unknown was how high these deliveries would be. As it turns out, Tesla's third-quarter deliveries soared.

During its third quarter, Tesla delivered about 24,500 vehicles, the company said in a press release on Sunday. This is up 70% sequentially and 111% year over year. Even more, these deliveries were up 40% from Tesla's record fourth quarter last year, when the automaker delivered about 17,500 vehicles. 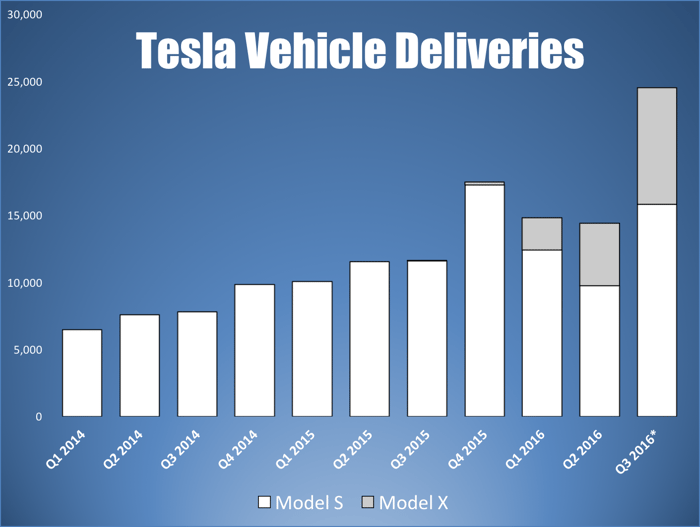 Data source: Company SEC filings and press releases. Quarter with asterisk indicates deliveries are approximate and "should be viewed as slightly conservative," the company said in its press release. Chart source: Author.

By vehicle type, Tesla's Model S deliveries were 15,800, up 62% sequentially and 36% year over year -- enough to put to rest any concerns that demand for Model S is declining. Model X deliveries were 8,700, up from 4,638 units in the prior quarter and from six units in the year-ago quarter, reflecting the company's rapid ramp-up in production of the late 2015-launched SUV.

Tesla also importantly noted it had 5,500 vehicles in transit to customers at the end of the quarter. Up by about 350 units from the vehicles, it had in transit to customers at the end of Q2. This in-transit inventory gives the company momentum going into the holiday quarter. Accordingly, Tesla said it expects fourth-quarter deliveries to be "at or slightly above Q3." Furthermore, Tesla said it is maintaining its guidance for delivering 50,000 vehicles during the second half of the year -- a target that would require about 25,500 deliveries in the final quarter.

Attempting to reassure investors its fourth-quarter deliveries won't fall short of its guidance the same way they did in the company's holiday quarter in 2014, Tesla also noted it expects 24,500 or more deliveries in Q4 "despite Q4 being a shorter quarter and the challenge of delivering vehicles in winter weather over holidays."

A big third quarter is an important achievement for Tesla. After missing its own guidance for vehicle deliveries for two quarters in a row and subsequently lowering its full-year outlook from 80,000 to 90,000 vehicles to 79,000 (with 50,000 units in the second half alone), the automaker was making it difficult for investors to take its aggressive growth targets for the next few years seriously. In particular, underwhelming deliveries in the first half of 2016 made the company's aim for 500,000 vehicle deliveries per year by 2018 look unrealistic.

But with Tesla now producing and delivering vehicles at a run rate of about 100,000 units, the electric-car maker's two-year growth target is beginning to look possible -- particularly with the help of a 2017 Model 3 launch, an upcoming capital raise to fund Model 3's production, and the Gigafactory's ongoing progress.