While Encana (NYSE:OVV) and Pengrowth Energy (NYSE: PGH) are both Canadian-based oil and gas producers, the similarities end right there. From their balance sheets to their portfolios to their upside potential, these two companies are not only the complete opposites today, but they are heading in different directions in the future. Those differences make one a better buy right now for investors choosing between the two.

If there's one thing that the downturn in the oil market has taught investors, it is the importance of investing in companies with strong balance sheets. Here's how these two compare:

While Encana has more debt than Pengrowth Energy, it has a much-stronger balance sheet overall. The company's financial situation has improved dramatically over the past few years, as it has lopped off more than $2 billion in debt since the end of 2014. Further, its key credit metric of debt to adjusted capitalization is well below the 60% covenant threshold. Finally, Encana does not have any near-term debt maturities, with its next maturity in 2019, while 75% of its debt is not due until 2030 and beyond.

Contrast this with Pengrowth, which has 640 million Canadian dollars ($487 million) in debt maturing next year. Worse yet, the company's senior-debt-to-EBITDA ratio is getting awfully close to its 3.5 covenant threshold. While the company believes that it can address its maturing debt by generating excess cash flow and selling assets this year, another deep dive in commodity prices could impact its ability to accomplish that goal.

Next, we will drill down into the portfolios of these two Canadian producers: 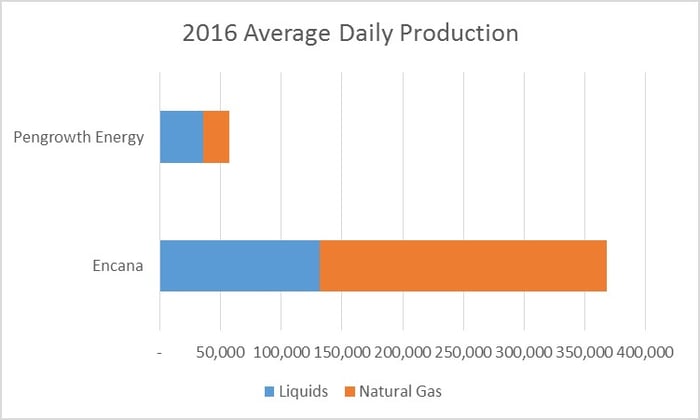 As that chart shows, Encana is by far the larger producer. While it does produce more gas, its larger scale gives it several critical competitive advantages. First, its larger asset base can absorb downtime from turnarounds without impacting production. For example, last quarter scheduled turnarounds and planned integrity-related maintenance activities across Pengrowth's portfolio affected production by 2,200 barrels of oil equivalent per day. For a company of Encana's size, that would be a rounding error, but for Pengrowth, it represented nearly 4% of its production going off line.

In addition to that, Pengrowth produces only in Canada, which is a disadvantage because Canadian crude often trades at a steep discount to the U.S. and global oil benchmarks. For example, the Canadian oil benchmark price plunged below $20 a barrel earlier this year, while the U.S oil benchmark bottomed out in the mid-$20s. Because of that, several producers, including Canadian Natural Resources (NYSE:CNQ), had to shut in heavy oil production during the first quarter. In Canadian Natural Resources' case, it shut in 900 barrels per day of heavy oil volumes during the quarter due to unfavorable economics. While Pengrowth has been able to mute the impact of weak prices this year thanks to strong oil hedges, those hedges will not last forever.

Encana, on the other hand, produces both in the U.S. and Canada, enabling it to capture higher U.S. oil prices. Furthermore, its U.S. production consists primarily of high-margin oil production from shale plays, while Pengrowth's primary production comes from low-margin heavy oil plays in Canada. Bottom line, Encana's geographic diversification is a distinct competitive advantage.

Pengrowth's mantra this year is "survive to thrive," with a goal to overcome its near-term financial challenges so that it can develop its vast resource base in the future. The reason the company wants to survive is that it is sitting on more than $11 billion of development opportunities at its Lindbergh heavy oil play and Montney gas plays. For a company of its size, that is an enormous resource base to drive growth for years to come. That said, given the company's current financial situation, it does not have the cash to develop these resources until prices rise.

Encana, likewise, has a vast resource base. The company believes it can drill more than 20,000 wells across its four core shale plays. More importantly, the company has the near-term capacity to capture this growth at current commodity prices. Over the next five years, the company estimates it can grow production by 60% to fuel 300% cash flow growth due to the strong economics of its drilling acreage in the U.S. and Canada.

In other words, for Encana, the future is now, whereas Pengrowth's future is not entirely clear.

An investment in Pengrowth is in the hope that the company can survive the current downturn so that it can develop its vast resource base at some point in the future. That is a risky bet. An investment in Encana, on the other hand, has a much-better chance of paying off. The company has the balance sheet and asset stability to weather the current downturn, and the portfolio of growth opportunities to thrive right now, making it the better buy.