For more than a century, Dow Chemical (NYSE:DOW) has been a leader in the chemicals industry. As a provider of chemical, plastics, and agricultural products and services, Dow has a worldwide presence that includes both consumer products and goods aimed at industrial customers. Yet after such a long and illustrious history, Dow had to survive a huge hit in order to get to where it is today: on the cusp of a major merger of equals with industry peer DuPont (NYSE:DD). Below, we'll look more closely at how Dow Chemical stock has fared and what's ahead for the chemical giant. 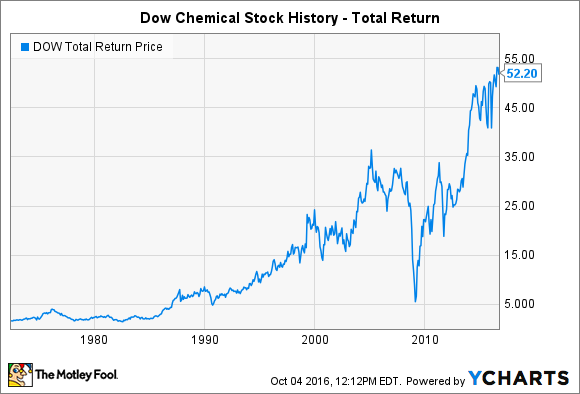 Dow's history dates back to 1897, when founder Herbert Dow set up the business in Midland, Michigan. From there, Dow became an industrial powerhouse, supplying the U.S. war efforts in the early 20th century and also pioneering the innovative use of plastics. As Dow entered more industries, including aerospace, weaponry, and agricultural chemicals, its stock grew. Stock splits in 1947 and 1952 gave longtime shareholders 12 shares for every one they had owned previously, and further gains culminated in three more splits in the 1970s.

More recently, Dow's growth has been fueled by a combination of internal growth and major acquisitions. In the 1990s, Dow worked hard to reorganize its operations in an effort to become more efficient, and the work helped position Dow more effectively as a global chemicals giant. Dow also agreed to purchase rival Union Carbide in a $9.3 billion stock deal in 1999, dramatically increasing in size and rivaling DuPont as the leader of the industry. Although the share price oscillated naturally during bull and bear markets, Dow regularly hit new all-time record highs through the mid-2000s.

Yet even as the company continued to grow its revenue, Dow Chemical saw its earnings top out in 2005. Net income gradually fell in the ensuing years, dropping by nearly a fifth in 2006 and eventually bottoming out in 2008 at barely an eighth of its 2005 earnings level. The bottom-line declines came at the same time that Dow was consolidating its internal operations, shutting down poorly performing plants and exiting unprofitable lines of business in order to focus more on its best opportunities going forward.

Yet Dow never stopped looking at potential strategic moves. Just before the height of the financial crisis in July 2008, Dow agreed to purchase Rohm & Haas, spending $15.4 billion. Later that year, when the worst of the credit crunch hit, Dow sought to put off the merger, but the two parties eventually went through with the deal despite the financial concerns that many investors had about its potential impact on the overall company. Dow shares fell more than 80% as some believed that the merger would prove financially catastrophic for the chemical company.

Since then, Dow has survived, and that's largely been enough to send the stock soaring from its 2009 lows. With prowess in specialty chemicals, agricultural products, and materials sciences, Dow has been able to tap into new opportunities and find new avenues for profit.

Late last year, Dow and DuPont announced that they would combine forces, merging but then breaking up the post-merger company into the companies. One will focus on agriculture, while a second will handle materials science and the third concentrating on value-added specialty products. Dow CEO Andrew Liveris will take the executive chairman role of the combined DowDuPont, and investors are hopeful that the split-up will unlock value from the stocks of both Dow and DuPont. The two companies still face regulatory scrutiny that could potentially block the deal, but executives at both chemical giants are optimistic about its eventual success.

Looking forward, Dow has had a long history of solid performance for investors, and its latest move reflects its participation in an era of consolidation in the chemicals industry. Going forward, Dow won't look the same as it does now, but the businesses that it helps spawn could become the chemical leaders of tomorrow.