From 6% to 11.6%, these high-yielding dividend stocks are screaming for your attention.

There are plenty of dividend stocks that handily outrun the S&P 500's tiny 1.7% yield. High yields can, however, sometimes be value traps that you don't want to get tangled into. The key to making real money from dividend stocks is to lock in a high yield in a company that looks well placed to preserve its dividend payout even through tough times. Like the three stocks I discuss here, each having entirely different catalysts backing them to support their dividend yields.

A multibillion-dollar turnaround story in the making

Somber stock price performance has pushed PPL's (PPL -0.36%) yield to 6.4%, but a potential turnaround could bring an end to the utility's worst days.

You see, PPL's utility operations in the U.K., also its largest source of income, have been under the scanner for several reasons, including political uncertainty and the impact of foreign currency fluctuations. As a U.S.-based company headquartered in Allentown, Pennsylvania, PPL reports earnings in U.S. dollars and translates pound sterling earnings from its U.K. regulated segment to U.S. dollars. Considering the segment contributed 56% to PPL's total net income in 2019, even a small decline in the value of pound can deeply hurt PPL's earnings.

PPL now wants to shed its U.K. business in entirety and become a pure-play U.S.-focused utility. Bloomberg reports several big names are lining up to bid for PPL's U.K. business for as much as 12 billion pounds, or nearly $15.3 billion (based on today's exchange rate), including Brookfield Asset Management and Spanish utility Iberdrola SA. PPL could set the ball rolling by swapping its U.K. assets with a buyer's U.S. assets. The company's also planning to pump $14.5 billion into clean energy over the next five years to ensure it isn't left behind in the renewables race. 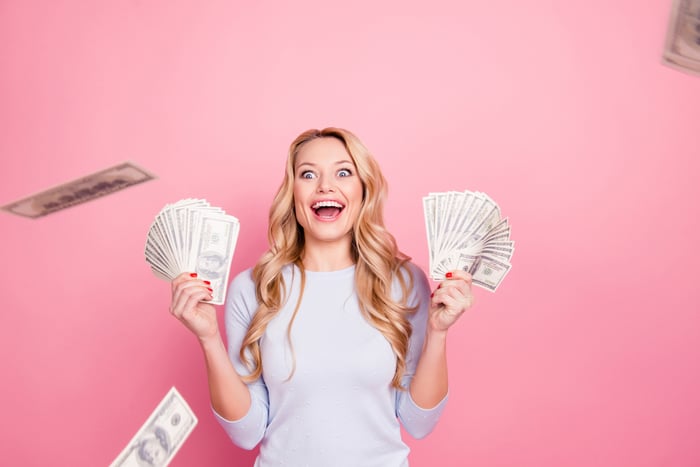 PPL management believes its U.K. business has been undervalued by the market. Once divested, management can focus on growth in the U.S., pare down debt, and reward shareholders better. PPL has paid a dividend every quarter since 1946 and consistently increased it in recent years. With so much happening at PPL and a potential sale of its U.K business seemingly not too far away, the stock looks intriguing right now.

This company's determined to protect dividends

Dow is a specialty chemicals expert serving a wide array of industries through its three business segments: packaging and specialty plastics, industrial intermediates and infrastructure, and performance materials and coatings. That's a massive addressable market for the company to serve when the economy recovers.

Meanwhile, Dow is making all the right moves to cut costs -- plans include divesting non-core assets and laying off 6% workforce by the end of 2021. It has already struck deals to sell its rail infrastructure assets and some U.S. Gulf Coast marine and terminal operations this year.

These moves should serve two purposes: redirect focus on its core business and balance sheet. That's not to say Dow isn't already financially strong: It held nearly $12 billion in cash and liquidity as of the end of the second quarter and none of its debt of $16.3 billion is maturing before 2023. For a cyclical stock like Dow, financial standing can decide whether it'll make or break through challenging times.

During its 2020 annual meeting of stockholders held in April, CEO Jim Fitterling emphasized Dow's priorities. "Our priority uses for cash have not changed. Ensuring safe and reliable operations continues to be our first priority. We will protect the dividend, and we will continue to de-lever," he said. Management's commitment, and Dow's actionable moves, should instill enough confidence in the stock among dividend lovers.

The collapse in oil price have taken the sheen off oil stocks, but Enterprise Product Partners (EPD -0.90%) is still worthy of your money given that it's a midstream play, or a company that connects oil producers to end users through its pipeline network that primarily stores, processes, and transports oil and liquids like natural gas.

Midstream operations have low direct exposure to oil prices and are predominantly fee-based: 86% of Enterprise Product Partners' gross operating margin came from fee-based sources in 2019. Gross operating margin is operating income excluding the impact of items like depreciation and one-time charges such as impairments and sale or loss on assets.

Of course, Enterprise isn't immune to the oil market rout. It just shelved its ambitious M2E4 pipeline project given the present market conditions. But that's a prudent move, one that'll save the company roughly $800 million in capital spending through 2022. Management will now use the money to pare down debt and repurchase its beaten-down stock, but I'm not ruling out the possibility of a dividend increase either, even if small. That's because Enterprise Product Partners has increased dividends for the past 23 consecutive years -- a track record it's unlikely to jeopardize.

The stock's still down nearly 46% year to date, is really cheap, and yields a hefty 11.6%, but Enterprise Product Partners is among the few dividend stocks whose high yields don't raise a red flag.

Why Dow, Alcoa, and Freeport-McMoRan Stocks Are All Hopping Today
366%