The world relies on oil and natural gas for much of its energy needs, and ExxonMobil (NYSE:XOM) has long been a leader in the energy industry. The integrated oil giant has produced immense returns for shareholders through its efforts in the upstream exploration and production realm, the midstream pipeline and delivery business, and the upstream refining and marketing division. In addition to providing dividend income, one way Exxon has shared its success with investors throughout its history has been to split its stock. Yet investors have gone 15 years without a stock split, making some wonder if the oil giant will ever make another such move. Below, we'll look more closely at the history of ExxonMobil's stock splits to see whether it's likely we'll witness another such move in the near future. 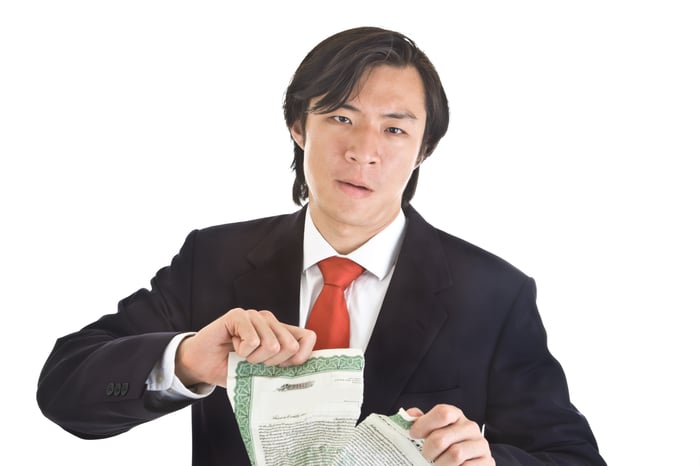 Here are the dates and split ratios for the stock splits ExxonMobil has done in the past:

As you can see, ExxonMobil has done stock splits at fairly regular intervals when the occasion warranted. With average annual returns of 13.5% over the past 45 years, Exxon has delivered successful performance to its investors.

When ExxonMobil historically did stock splits

ExxonMobil's history of stock splits follows a pattern that many other stock market giants have used to guide their own stock-split decisions. In 1976, ExxonMobil shares climbed above the $100 mark, and a few months later, Exxon implemented its first stock split in 20 years, sending the stock back down into the $50s. Similarly, in late 1980, Exxon shares had climbed substantially in light of the rapid rise in oil prices, and that again prompted a split early the following year.

After that, oil prices fell sharply. Yet by 1987, the stock had once again hit triple digits, and Exxon followed suit with an ill-timed split that preceded the 1987 stock market crash by a single month. That helped put off the next stock split by nearly a decade, but even in an era of low oil prices, Exxon managed to climb above $100 per share in late 1996, prompting the next split the following year. A recovery in oil led Exxon's stock higher in 2000 and 2001, and that set the stage for the company's most recent stock split.

Since 2001, however, ExxonMobil hasn't split its shares. One possible time when a split might have happened was 2007, when oil prices hit $150 per barrel and Exxon shares again neared triple-digit levels. Still, the ensuing oil bust occurred before Exxon could pull the trigger, and the stock eventually lost about a third of its value by 2010.

Exxon has defied its tradition by choosing not to do a stock split even when the time seemed ripe. In late 2013, Exxon stock climbed above $100 per share, and it stayed there for much of 2014 before falling back. Even now, the stock is above $80, defying the much larger losses some of its smaller peers have suffered during the crippling oil-price plunge that cut crude in half.

Will ExxonMobil ever split again?

The big question for ExxonMobil shareholders is whether they'll get one more stock split out of the oil giant. With the company's market cap at more than $350 billion, it's easy to think any future stock split will be the company's last, if only because doubling in size repeatedly becomes more difficult each time.

Yet more troubling for split proponents is that ExxonMobil didn't move forward in 2014 with a stock split. It's possible Exxon has changed its thinking, joining the many companies that are now comfortable with -- or even happy about -- sporting triple-digit share prices.

It's possible that if oil prices rebound enough to have a dramatic impact on ExxonMobil's financials, the energy giant could give shareholders a long-awaited stock split. However, it's also quite possible that we've already seen the last ExxonMobil stock split, and that investors will have to be happy with the history the company has already given them.