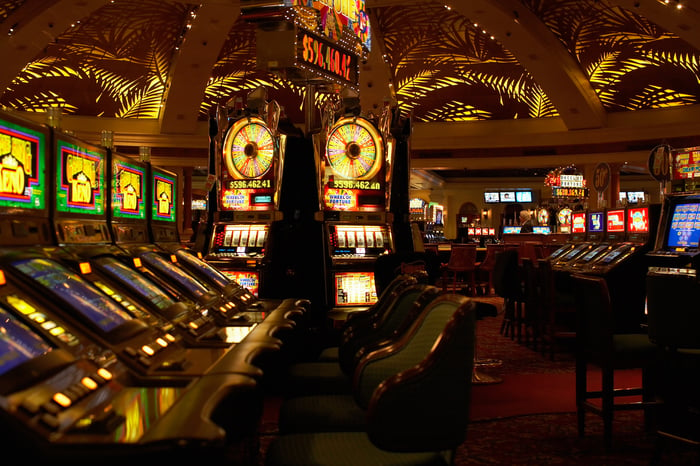 If casinos want to prevent their gaming floors from becoming ghost towns, they're going to need to introduce the next generation of gambling: games of skill, not chance. Image source: Getty Images.

Forget one-arm bandits: Caesars Entertainment (NASDAQ:CZR) plans to unveil the future of casino gaming when it launches a new type of device that pairs with how well you can play first-person video games. Think of it as winning big payouts for skillfully playing Call of Duty, Need for Speed, and Madden NFL.

On a cold streak

The casino industry needs to change. According to video gaming machine developer GameCo, U.S. casinos rely upon slot machines for three-quarters of their annual revenues, which are also a favorite of older gamblers, partially explaining why casino revenues have been on the decline for decades.

The Center for Gaming Research at the University of Nevada-Las Vegas also says casino revenues have barely grown over the past decade, rising just 1.4% to $40.2 billion last year. Yet even that rise hasn't been uniform, as it found that of the 20 states that had gambling in 2007, half of them have seen revenue decline since then.

Delaware, for example, recorded $651.7 million in gambling revenues in 2006, but by the end of 2015, its take had fallen to $400.9 million. Worse, New Jersey saw its gambling revenues cut in half, from $5.2 million to just $2.5 million last year. During that time, Atlantic City has also seen a number of its casinos go under, with four declaring bankruptcy in 2014 alone.

The decline in revenues seen in those states is largely a result in other gambling opportunities opening elsewhere in the Northeast. No longer are gamblers limited to Atlantic City, Dover Downs, or Foxwoods and Mohegan Sun in Connecticut.

In need of millennial appeal

But the casinos need to appeal to a new demographic if they want to thrive. The statisticians at Statista say more than half of all gamblers in 2010 were aged 50 or older, with just 18% being between 18 and 34, which is why GameCo's revolutionary video-game machine could change the industry's fortunes.

Millennials grew up playing video games, and though casinos introduced video slots some time ago, players have no control over the outcome. Pull a handle or press a button, and the machine determines the outcome. They are truly games of chance.

GameCo wants to make payouts based on skill, and its machines ought to appeal to younger people who still feast on first-person shooters, driving games, and sports-oriented fare. It will be installing 21 gaming positions in all three of Caesars' properties, with three triple-unit carousels at Caesars, two at Harrah's Resort, and two at Bally's Wild Wild West.

The first machine to make its debut will be a three-bay console called Danger Arena. To play, a gambler inserts money or a card and is given a brief overview of how the game works and how the controller operates. It then presents the player with a map or scenario depending on the type of game being played, which is chosen randomly by the machine, and the player has 45 seconds to maneuver through the scenario before advancing to the next 45-second segment. To start earning money, you need to take out six robots; you earn the highest payout when you take out 10 robots.

GameCo isn't the only one that's looking to create a video game-gambling mashup. Another start-up, Gamblit Gaming, will be introducing similar games of skill at Caesars casinos in California and Nevada.

Admit it. Being a passive participant in gambling's biggest money-maker is a snoozefest. The one-arm bandits that have been the hallmark of casinos from almost the beginning are a dying breed, along with the segment of the population they're most popular with. If casinos are going to grow, and not just cannibalize existing resorts by opening more gambling halls, it will be by appealing to a younger demographic through games of skill that immerse the player in the action. That's a bet the casino operators are going to have to take.