On the surface, it would seem that Enbridge (NYSE:ENB) and Williams Companies (NYSE:WMB) are very similar. At their core, both operate fee-based pipelines that transport oil and gas across North America. That said, Enbridge offers investors that and so much more, which is why long-term investors should consider buying its stock over Williams Companies.

Investors looking for income today need to look no further than the current yields of both companies. At 3.65%, Enbridge's current yield is well above Williams' 2.6% payout after the U.S. pipeline company slashed its dividend by 68.8% in early August. It did so to support its MLP Williams Partners (NYSE: WPZ), which needed capital to fund its near-term growth projects because it could not obtain equity capital from the market at a reasonable cost.

Therein lies another reason Enbridge tops Williams. While the Canadian pipeline giant has an enormous capital backlog, it won't need outside equity funding for the foreseeable future: 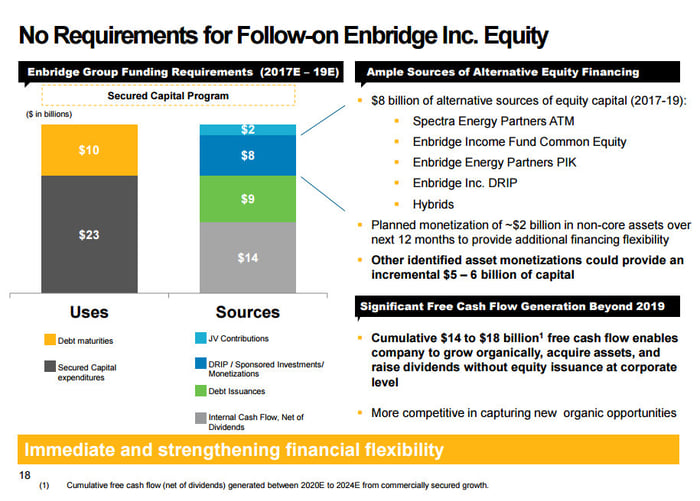 Contrast this with Williams Partners, which still has a multibillion-dollar capital shortfall, even with the cash infusion from Williams Companies: 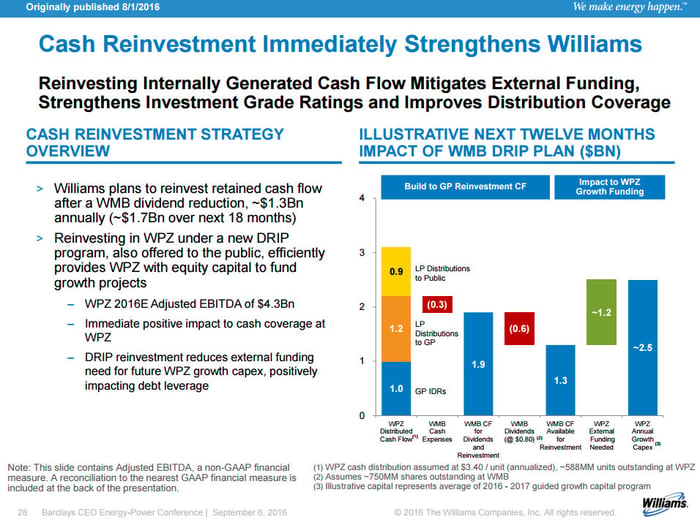 One reason Enbridge has greater access to capital is because it has a strong investment-grade credit rating of BBB+/Baa2. Its MLP, Enbridge Energy Partners (NYSE:EEP), also has a solid investment-grade credit rating of BBB/Baa3. Contrast this with Williams Companies, which is non-investment grade rated at Ba2/BB, and Williams Partners, which is at the bottom rung of investment grade at BBB-/Baa3. Enbridge's stronger credit rating is important because it allows the company to raise inexpensive debt. That certainly has been the case in the past year, with Enbridge Energy Partners, for example, issuing 10-year notes last fall yielding 5.875%, while Williams Partners issued 10-year notes this spring yielding 7.875%. That higher interest rate means more cash going to Williams' creditors instead of its investors, which is not helping its stock price.

An even better company tomorrow

Aside from the higher yield and better balance sheet, the real draw for long-term investors is Enbridge's visible growth. The company, which is in the process of combining with Spectra Energy (NYSE:SE), will not only be the largest energy infrastructure company in North America, it will also boast the most growth in the sector. For perspective, the pro forma company has $26 billion of projects under development, compared to just $6 billion at Williams. Those projects are expected to drive 12% to 14% compound annual growth in Enbridge's available cash flow from operations through 2019.

That growing cash flow will fuel robust dividend growth for Enbridge's investors for the foreseeable future. In fact, Enbridge expects to grow its dividend by 15% next year thanks in part to the addition of Spectra Energy. Meanwhile, it plans to increase its payout by 10% to 12% compounded annually from 2018 through 2024 thanks to the projects already under development as well as the fact that Enbridge and Spectra Energy have another $48 billion in projects under consideration. Contrast this with Williams Companies, which will not even be in the position to restart dividend growth until 2018. While one analyst believes the company could boost the dividend by 150% in 2018 and grow it by 5% annually after that, Williams has not set a long-term dividend growth forecast just yet.

While Williams Companies is a solid energy infrastructure company, it's no match for Enbridge right now. The Canadian pipeline giant is a much stronger investment in the current market because of its better yield and balance sheet. Further, it has clear visibility to deliver double-digit dividend growth for the next decade thanks to the projects in its backlog. Those factors clearly make it a better choice for long-term investors.