On Tuesday, Delta Air Lines (NYSE:DAL) and Alaska Air (NYSE:ALK) kicked off the monthly reporting of airline traffic and capacity.

Their reports showed that airlines are quickly getting capacity growth under control now that the peak summer travel season is over. This should lead to strengthening unit revenue trends across the airline industry this fall. 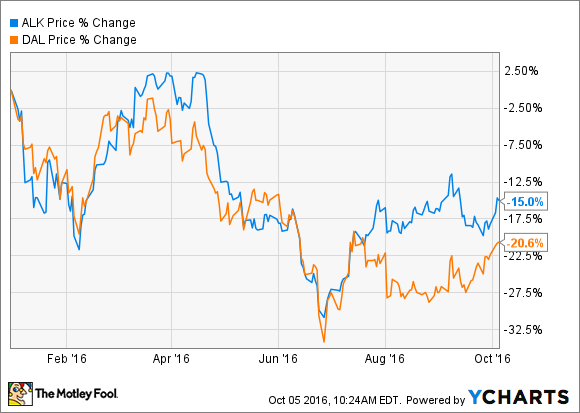 The culprit has been a long string of unit revenue declines across the airline industry. Falling fuel prices and changing industry dynamics have caused airlines to increase capacity at a fast pace for the past two years, outrunning demand growth. To keep their planes full, airlines have had to slash fares.

To be sure, many airlines, including Alaska and Delta, are still earning record profits. That hasn't appeased investors, who recognize that oil prices aren't falling anymore. Rising jet fuel costs will start to pressure airlines' earnings soon, barring an abrupt rebound in unit revenue.

To get unit revenue moving in the right direction again, airlines clearly need to rein in capacity growth. However, most carriers were wary of making those adjustments during the summer peak season, which is their most profitable period of the year. Instead, they scheduled capacity cuts for the fall.

For Delta, the shift was more subtle. Additionally, Delta's IT meltdown in August caused a huge number of flight cancellations this summer. Still, capacity increased just 1.8% year over year in September, compared to 3.2% growth in Q2. Delta plans to limit capacity growth to 1% in Q4.

Even with a relatively modest change in capacity growth, Delta saw a big improvement in its unit revenue results last month. The company estimates that passenger revenue per available seat mile declined about 3% in September, compared to a 7% drop in July. (The August results were even worse, due to Delta's technology outage.)

Delta's unit revenue trajectory could potentially improve further in Q4. As noted above, capacity growth is set to slow again. Additionally, Delta faced a significant headwind in Q3 related to lower currency-hedging gains. That headwind is set to fade in Q4 and beyond. Offsetting these positives, Delta faces tougher year-over-year unit revenue comparisons in Q4, relative to Q3.

Delta Air Lines and Alaska Air weren't alone in cutting back capacity growth to address weak unit revenue trends. Across the industry, most carriers are set to report slower capacity growth for September and even more modest growth plans for Q4.

This caution is likely to continue until unit revenue starts rising again. With most airlines moving toward tighter capacity discipline, the industry is likely to return to modest unit revenue growth by sometime in the first half of 2017. That should help airline stocks overcome their recent malaise.