Having been around for more than a century, Caterpillar Inc. (NYSE:CAT) and Illinois Tool Works (NYSE:ITW) have carved a niche for themselves in their respective industries, even making it to the Fortune 500 list. It hasn't been easy for the industrial conglomerates lately, though, as weak end markets hit portions of their businesses. The market, however, hasn't overlooked the efforts the companies have made to tackle the headwinds, which is why both Caterpillar and Illinois Tool Works are up almost 29% each year to date as of this writing.

Both stocks are clearly on an uptrend and look attractive right now, but it's only when you dig a little deeper that you realize one could offer far better value for money than the other if bought today. Before I tell you which stock I'm talking about and why, let's learn a bit about Illinois Tool Works' and Caterpillar's businesses and see where they stand on the global map.

After divesting several businesses in recent years as part of a major restructuring program, Illinois Tool Works has narrowed down to seven segments: Automotive OEM, food equipment, test and measurement and electronics, welding, polymers and fluids, construction products, and specialty products (mainly packaging). As you might have already guessed, the company serves nearly every key industry. It's a well balanced portfolio where each segment contributes at least 10% to total revenues.

Caterpillar is all about heavy machinery. It operates three business segments -- construction industries, resource industries (primarily mining), and energy and transportation (E&T) aside from a financial arm. Caterpillar is the world's largest manufacturer of construction and mining equipment, gas turbines, diesel and natural-gas engines, and locomotives. Considering its dominance and global reach, you'd expect Caterpillar to have delivered superior returns than Illinois Tool Works. That's far from truth.

Unlike Illinois Tool Works, Caterpillar is heavily exposed to the commodity markets through its resource industries and E&T segments. Before Caterpillar's mining-equipment business could recover from the blows of the commodities bubble, oil prices plunged and hit its E&T segment hard. The company's top and bottom lines have fallen off the cliff. 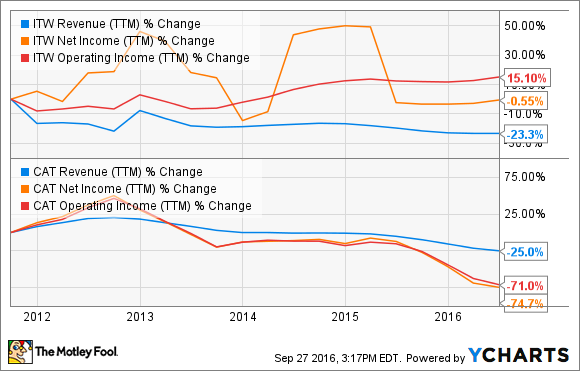 Caterpillar's profits have headed in one direction for four years now: south, with almost three-quarters of its profits getting wiped out in the past five years. Illinois Tool Works' bottom line has been more volatile during the period, but flattish overall thanks largely to its diversification. That's a big positive for investors in the long run.

In fact, Caterpillar's last quarter was one of its worst, with management downgrading full-year guidance to $2.75 per share at mid-point, representing roughly 21% and more than 50% drops from its 2015 and 2014 EPS, respectively. In sharp contrast, Illinois Tool Works reported record operating profits last quarter, encouraging management to upgrade outlook for the full year: It expects 9% growth in EPS at mid-point.

So while Illinois Tool Works is growing like gangbusters, Caterpillar is struggling to stop its profits from falling further. Caterpillar will have to wait for mining and oil and gas companies to start spending again to see its fortunes turn. Illinois Tool Works, meanwhile, has set down its financial goals for 2017 and beyond, which include:

Financials and dividends: It's a tight race

I must point out here that Caterpillar has been equally proficient in converting its profits to FCF despite the challenges: It boasts an above 100% conversion rate since 2013. Unfortunately, the growth in its cash flows pales in front of Illinois Tool Works'. 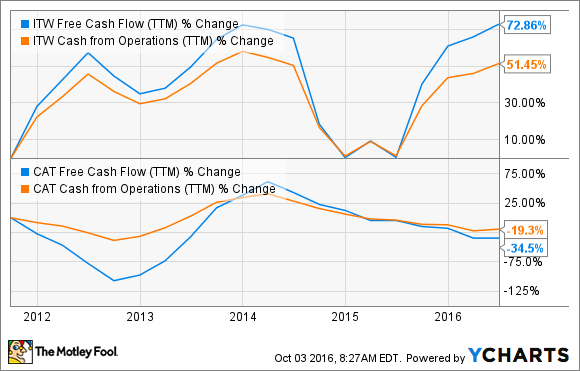 Financially, Illinois Tool Works scores an extra point with an interest coverage of 13 times compared to Caterpillar's four times coverage, which means its operating profits are enough to cover 13 times the interest it's paying on debt. In terms of debt, both companies are highly leveraged with total debt-to-equity ratio of above one, which isn't surprising given the capital-intensive nature of their businesses.

The strong growth in Illinois Tool Works' cash flows has worked hugely in investors' favor: A Dividend Aristocrat, the company has raised its dividend for 52 straight years, with its dividend growing at a compounded average of 11% since 2012. Caterpillar has a solid track too, having more than doubled its dividend in the past decade. But its dividends look riskier especially after Caterpillar skipped its usual dividend increase in June this year, perhaps because its FCF payout is hitting dangerous levels. 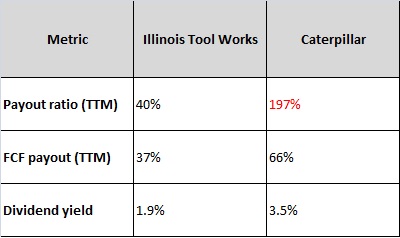 Caterpillar's dividend yield of 3.5% is attractive, but I believe Illinois Tool Works' less cyclical and diversified business makes it a lower-risk stock with great returns potential from a long-term perspective. In the past decade, Illinois Tool Works' total returns (stock price plus dividend) jumped threefold compared to Caterpillar's 80% returns.

Caterpillar might well be at the bottom of the cycle given the recent developments in commodity and oil markets, but the stock's rally in the past year is misaligned to its operating performance. In other words, Caterpillar's lofty valuations indicate that much of the optimism has already been baked into the stock price. Keeping that in mind, I'd bet on Illinois Tool Works.