The good news is HP (NYSE:HP) stock is up 8% since announcing a surprisingly strong fiscal 2016 third quarter on Aug. 24. The not-so-good news is that HP shares would have really skyrocketed had it not been for its lagging printer division.

Consumer printing-related sales took it on the chin last quarter, as did HP's supplies segment. What really hurts is that before taxes, printing generates the majority of HP's earnings from continuing operations. Needless to say, CEO Dion Weisler and team have some work to do, but a few of HP's recent moves could be just what the doctor ordered.

Phase one of the plan

The 12% jump in notebook units sold led to the PC unit's 4% overall improvement, despite a 6% drop in desktop sales. Notebook's delivered a 12% gain in revenue sequentially, and 8% year over year, which was the catalyst for its ever-so-slight increase in total sales to $7.51 billion compared to a year-ago $7.5 billion.

As impressive as HP's personal systems unit performed last quarter -- operating margins also soared to 4.4%, up from just 2.8% in 2015 -- it was how the division was able to engineer such strong results that will be the impetus for Weisler and team to turn around that "other" division.

HP's focus on notebooks targeting the world's mobile consumer and its recently released virtual reality (VR) ready PC OMEN specifically designed for gamers are ideal examples of its master plan. HP isn't trying to be all PC things to all people: It's carving out niches within the broader market. And based on several recent moves, it's clear HP intends to replicate that plan to jump-start printer sales. 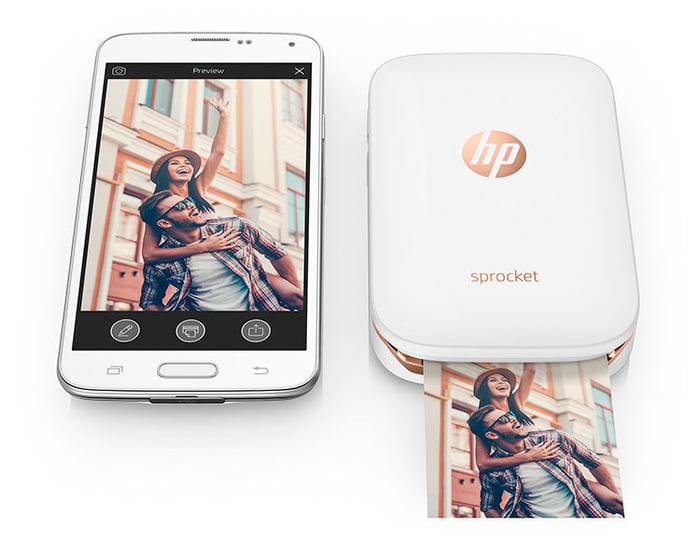 Phase two is under way

The recent $1.05 billion deal for Samsung's (NASDAQOTH: SSNLF) printing division is one example of HP's strategy. The largest printing-related acquisition in HP's history was highlighted as notable for a number of reasons, but a few stand out.

One, folding Samsung's "formidable portfolio" of printers and copiers utilizing multifunction printing technologies (MFPs) gives HP customers what is essentially an all-in-one alternative, including secure cloud-based functionality. Second, the new MFPs, as per HP, will come with as few as seven replaceable parts, which translates to increased efficiency and lower cost of ownership.

Finally, the Samsung deal also includes "more than 6,500" printing patents, which will facilitate further innovations, along with a bevy of printing supplies and accessories. Supplies were HP's second largest source of revenue last quarter, behind only notebooks, so its 18% sales nosedive last quarter really stung.

Another example of HP's printing strategy of targeting specific needs and markets is its recently released Sprocket photo printer. At about the size of a smartphone, Sprocket won't replace a home or office printer. Sprocket is for the social media and smartphone camera-happy consumers who, according to one estimate, will snap 2.5 trillion pictures this year.

At an introductory price of $129 Sprocket sales aren't likely to pad HP's revenue coffers much. However, the trillions of pictures taken -- the majority of which will be via smartphone -- will require not only a Sprocket to print and share, but also ink, paper, and any future accessories. Much the way Telecoms subsidize smartphone costs to push data plans, Sprocket could turn out to be a means to Weisler's end: boosting supply sales.

There's also the opportunity 3D printing offers -- a market estimated to reach $30 billion in five years -- high-end enterprise printer-copier solutions primarily to drive supply revenue, and the rapid global adoption of PrintOS for HP's print service providers included in Weisler's strategy. The plan to reinvigorate printing is taking shape, and if it takes hold, HP's nice stock price run of late will be just the beginning.