It's no secret Twitter's (NYSE:TWTR) business is facing some headwinds recently. Revenue growth has been rapidly decelerating, with the company now guiding for just 5% year-over-year growth in Q3 -- a huge difference from the 58% year-over-year revenue growth Twitter reported in its third quarter last year. As Twitter fails to reinvigorate its growth -- even after co-founder Jack Dorsey returned as CEO last year -- it's unsurprising that investors might be happy with the idea of a buyout.

WSJ's story builds on CNBC's report in September that the company had "received expressions of interest," from several companies, including Google and salesforce.com (NYSE:CRM). But these two companies were only two names "among other technology companies," CNBC said. This initial scoop on a potential buyout sent shares soaring about 20%.

Adding some substance to all these rumors, Salesforce.com CEO Marc Benioff has expressed interest in Twitter, calling it an "unpolished jewel" in a private dinner with a dozen CEOs, WSJ's Langley reported. Going further, Benioff reportedly said he wants to "make [Twitter] a great company."

Langley says Benioff's interest in Twitter has "set off the bidding process."

Importantly, Langley emphasized a buyout isn't guaranteed: "There is no guarantee any bid will come in high enough to entice Twitter to sell, and the company could remain independent."

With another stock price gain solely based on a buyout rumor, some Twitter investors might be wondering what to make of this. There are several takeaways.

First, Twitter investors shouldn't count on anything. Without any official word from Twitter, these rumors are only speculation. In addition, even if Twitter is bought out, it's not clear what price the buyer would pay. 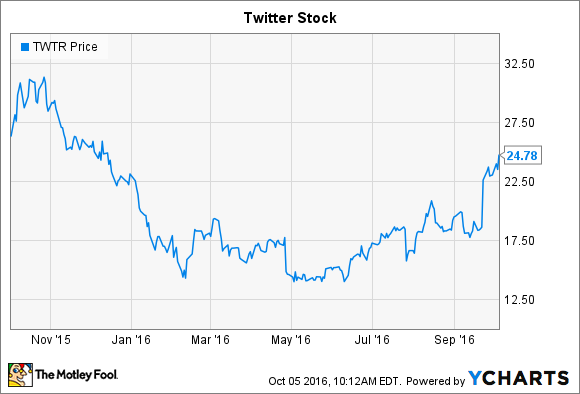 Second, investors who are uncertain about the company's ability to navigate growth challenges may want to consider selling. Shares are up about 40% in the past three months -- a gain which is closely tied to speculation about a potential buyout. The stock's recent rise gives Twitter shareholders an opportunity to sell the stock at a much higher price than the sub-$15 levels the stock was trading at earlier this year. Selling, of course, could potentially mean missing out on a larger gain if the social media company does get bought out and the per-share buyout price is higher than Twitter shares are trading today, but it's simply impossible to know what is going to happen.

Ultimately, investors should simply evaluate whether or not Twitter stock is worth its current share price of about $24 -- buyout or not -- and determine whether they should sell based solely on this.