Shares of Acacia Communications (NASDAQ:ACIA) jumped on Wednesday following the release of preliminary third-quarter results, as well as details regarding a previously announced stock offering. At noon, the stock was up about 12%.

In a filing with the Securities and Exchange Commission, Acacia provided preliminary results for the third quarter, which bested its previous guidance. The company expects to report revenue in the range of $130 million to $133 million and non-GAAP EPS in the range of $0.83 to $0.90.

Its previous guidance, issued in its second-quarter earnings report, called for revenue in the range of $120 million to $128 million and non-GAAP EPS in the range of $0.64 to $0.76. Acacia is expected to report its official results in November.

With Acacia's third-quarter results coming in well above previous guidance, investors have largely undone the decline in late September caused by the announcement of a stock offering. Acacia provided details on this stock offering in a separate press release on Tuesday. It plans to offer 4.5 million shares in total, with 1.2 million being sold by the company itself and the remaining shares being sold by certain shareholders. 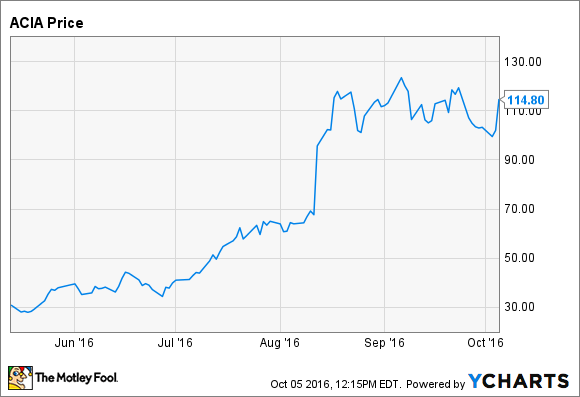 Shares of Acacia have soared since the company went public last year. Acacia has been growing revenue at a breakneck pace while producing profits on both a GAAP and non-GAAP basis, a rarity among high-flying technology stocks. While the initial announcement of the stock offering pushed the stock down, Acacia's strong third-quarter results were enough for investors to forgive and forget.