We Fools believe that investors of all ages can benefit from owning individual stocks, so we asked a team of contributors to highlight a stock that they believe is a solid choice for someone in or near retirement. Read on to see what they had to say.

Todd Campbell: Microsoft (NASDAQ:MSFT) isn't the same stodgy PC company that it was a few years ago, and that's great news for investors. The company is pushing into cloud-based software solutions, a strategy that's likely to keep generating substantial cash flow for investor-friendly growth and dividend payments.

Importantly, Microsoft doesn't think it's anywhere near topping out in the cloud. The company believes its commercial cloud revenue can grow from an annualized $12 billion clip today to $20 billion in 2018.

One of Microsoft's biggest successes is Office 365, its online software productivity suite. Commercial Office 365 revenue was up 54% year over year last quarter. The company is also notching rapid growth from Azure, its app building and management product. Azure sales more than doubled from a year ago last quarter.

Future revenue should benefit from ongoing adoption of Xbox Live, a captive Xbox ecosystem, and integrating search into Windows 10, Xbox, and Surface laptops. Last quarter, Xbox live membership grew 33% from a year ago, and search revenue rose 16% year over year.

Microsoft also offers investors a bulletproof balance sheet that sports more than $110 billion in cash and short-term investments. Recently, management announced a $40 billion buyback and an 8% increase to its dividend payout. The buyback should help Microsoft grow earnings faster than sales, and the dividend boost means shares are yielding 2.7%. Given Microsoft's top-tier status and these catalysts, it's one of my favorites stocks to buy right now.

This retailer has the wind at its back

Brian Feroldi: With each passing year, more baby boomers reach retirement. This demographic shift should ensure that the demand for high-quality healthcare remains strong for years to come, and my favorite way to play the trend is CVS Health (NYSE:CVS).

You're probably familiar with the company's nationwide chain of retail pharmacy stores, but did you know that it also owns the second-largest pharmacy benefits management business in the country? This business segment helps other organizations that provide healthcare -- think governments, unions, and employers -- to keep their prescription-drug costs in check by outsourcing the plan management to CVS. Since CVS has decades of pharmacy experience and substantial buying power, it can negotiate discounts from drug manufacturers. It then passes those savings along to members in exchange for a modest fee. This win-win relationship keeps the company's retention rate high, which should help drive revenue and profit growth for years to come.

CVS Health's retail stores are also poised for prosperity. The company is rolling out a nationwide network of in-store clinics that can help to treat minor ailments for a modest fee. This approach increases patient convenience and should ensure that patients regularly come back to the company's stores.

In all, CVS Health is well positioned for revenue and profit growth in the years ahead. With its shares trading for less than 14 times next year's earnings estimates, I think right now is a great time for retirees to consider getting in.

An excellent company at a fair price

Jason Hall: Warren Buffett has said it's far better to invest in a great businesses at a fair price than in a fair business at great price. That's certainly the case for specialty insurance seller and burgeoning conglomerate Markel Corporation (NYSE:MKL) today. Markel's share price is up about 5% so far this year -- though it's actually down since early summer -- but on a valuation basis, one could argue that its shares are cheaper, at least on a book-value basis.

Investors in Markel should understand that the company's insurance profits can swing from one period to the next, and that price to book value per share is probably a better general measure of Markel's actual value, assuming its earnings move higher over time. Why price to book value? Because much of Markel's long-term value -- as a financial holding company -- is derived from the assets it owns. This includes nearly $3.8 billion in its stock portfolio, which has routinely outperformed the S&P 500 under co-CEO Thomas Gayner for 20 years, and its Markel Ventures segment, which owns multiple subsidiaries in a variety of industries.

So if you're looking for a long-term, buy-and-hold investment, Markel should be on your list.

Could the King of Search be a retirement stock?

Brian Stoffel: Most people wouldn't consider an expensive tech company that offers no dividend to be a "retirement stock." But in Alphabet (NASDAQ:GOOG) (NASDAQ:GOOGL), I think we have a company that fits the bill. The parent company of Google, Alphabet has a huge moat surrounding its core businesses. Berkshire Hathaway Vice Chairman Charlie Munger once quipped that he had "probably never seen such a wide moat."

But there's more to it than just that. With $77 billion in cash on the books, a full 14% of Alphabet's market cap is simply cash. That, plus the $20 billion in free cash flow the company has brought in over the past year, makes it a very likely candidate to start paying a dividend at some point over the next decade. If it started paying one tomorrow (it won't, but this is a thought exercise) using just 60% of its free cash flow, it would amount to a 1.7% yield on C shares.

Alphabet is a solid company to buy with or without a dividend. The fact that it could easily start paying one while you're in retirement is just icing on the cake.

Retirees should bank on a rebound in this stock

Sean Williams: Sometimes the best deals can be had by purchasing broken stocks that still have healthy business models. This is why retirees and pre-retirees should give strong consideration to scooping up shares of Wells Fargo (NYSE:WFC) following its recent PR flub.

For those who may not have been following the story, Wells Fargo was hit with a $185 million fine in September after some 5,300 employees were caught setting up fraudulent accounts for customers who hadn't asked for those accounts to be set up in the first place. Wells Fargo relies on cross-selling of its products to boost business in a low-yield environment, and it appears that quite a few employees took it too far. CEO John Stumpf didn't help matters much by failing to take responsibility for his company's actions in a recent Congressional hearing. There's the potential here for higher near-term legal costs and lower revenue as consumers and Wall Street digest the fallout from this incident. 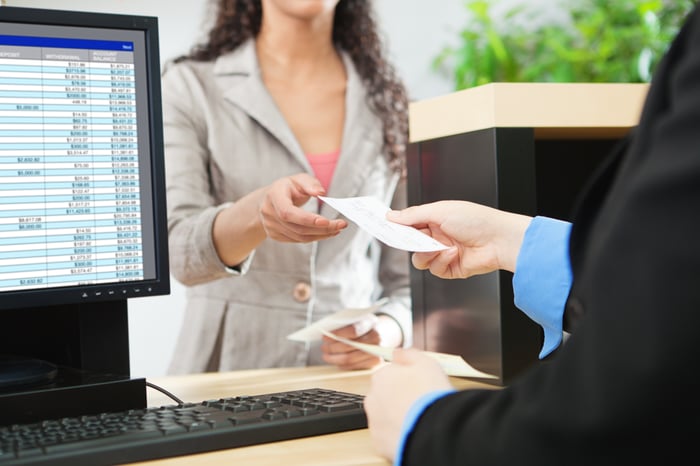 There's no way to spin this news as a positive. However, I'd point out that consumers rarely hold grudges for long. Bank of America faced backlash following its attempt to introduce a $5 debit-use fee in 2011, but it has been able to grow its deposits pretty steadily since after quickly shelving the idea. Why? Consumers tend to have a short-term memory when it comes to PR issues.

But I wouldn't place your bets on Wells Fargo solely on the basis of consumers' feelings toward the bank. Instead, I'd suggest placing the bulk of your faith in Wells Fargo's superior results. In the second quarter, Wells Fargo managed to grow deposits by 4% from Q2 2015, while its loan portfolio increased by 9% to $951 billion. When interest rates do normalize, I'd estimate that Wells Fargo could be looking at $3 billion to $5 billion in added net income from interest-based assets. It's also well-capitalized and generates a healthy 1.2% return on assets. Generally speaking, anything above 1% is good for a bank.

As long as Wells Fargo continues to focus on loan and deposit growth while avoiding riskier banking practices, and it maintains or grows its current annual dividend of $1.52 (good enough for a 3.3% yield), then it could be the perfect addition to any retirement portfolio.