Most people probably hadn't heard of Nutanix (NASDAQ:NTNX) until last week, when the company enjoyed a blockbuster IPO and shares jumped over 130% on the first day of trading. The IPO is notable because it signals that the market is warming back up for tech IPOs, after something of a relative drought of new issues over the past 12 to 18 months. This is especially true since the IPO priced above the initial expected range, which itself had been increased. Shares have continued gyrating in the days since, which is par for the course.

As far as the actual business and fundamentals go, here's a quick rundown of Nutanix.

Nutanix bills itself as an "enterprise cloud company," which is fairly generic and non-descriptive. What Nutanix actually does is integrate servers, storage, and virtualization within a single platform. Traditionally, these functions are delivered and managed separately, with each often running a different proprietary operating system. Integrating them helps reduce costs and improve performance. Nutanix's solutions are easily scalable, too, and the company can cater to a wide range of customers large and small. This allows IT departments to focus more on the applications and services that drive their own businesses, instead of worrying too much about the backend infrastructure.

The company has two primary product families: Acropolis and Prism. Both are delivered on traditional x86 servers. Acropolis focuses on distributed storage and application mobility, while Prism offers integrated virtualization and infrastructure management. These software products are either packaged into commoditized servers and sold through resellers or original equipment manufacturers, or customers can choose to only purchase the software by itself and have it deployed on a compatible server system.

Nutanix has a diverse customer base across a wide range of sectors, including automotive, education, energy, retail, and telecommunications, among many others. As of July 31, 2016, the company had almost 3,800 customers. Notable clients include Activision Blizzard, Nordstrom, Jabil Circuit, Toyota Motor, and the U.S. Department of Defense. Competitors include VMware, Red Hat, Hewlett-Packard Enterprise, Cisco Systems, and NetApp. Nutanix also collaborates with and supports offerings from some of these rivals.

Growth over the past few years has been impressive. Sales jumped 84% last year to $444.9 million, while billings more than doubled to $637.8 million. This has been driven by dramatically growing the customer base from approximately 780 customers in fiscal 2014 to the nearly 3,800 today. 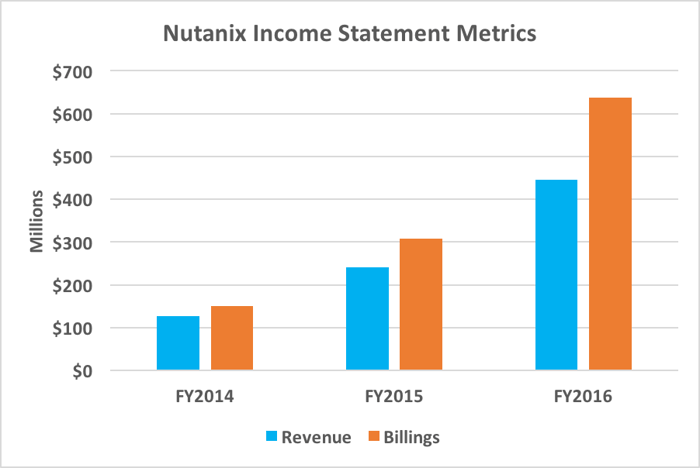 It's always good when insiders retain large ownership positions in the company, particularly if they were founders. Nutanix was founded by Dheeraj Pandey, Mohit Aron, and Ajeet Singh in San Jose, California, in 2009. Aron was initially Nutanix's CTO and left the company in 2013 to start Cohesity, but retains 10.7 million shares (7.8% ownership). Pandey currently serves as CEO and has 11.3 million shares (8.1% ownership).

As is common these days, Nutanix uses a dual-class structure intended to consolidate voting power among insiders. Class A shares get 1 vote per share, while Class B shares that can only be held by insiders get 10 votes per share. Both classes have the same economic rights to the business, and only differ on voting rights. Thanks to these Class B shares, insiders retain 98.8% of all voting power.