NXP Semiconductors' (NASDAQ:NXPI) stock price history has seen a long climb over nearly seven years, and recent rumors of a possible buyout from Qualcomm (NASDAQ:QCOM) (or other players) is pushing up the stock's value to close to its historical high, as you can see in the chart below.

A recent one-day stock price pop of 22% came after The Wall Street Journal reported that Qualcomm is attempting to buy NXP Semiconductor for an undisclosed sum. That news was recently followed up by an article by Bloomberg that said NXP is considering selling itself to another company (as in, not Qualcomm) and has hired Qatalyst Partners to do so. NXP is rumored to be fielding inquiries from Avago Technologies, Intel, and Samsung.

While there haven't been any details on the possible sale price, here's what NXP Semiconductors' financials look like right now:

If you look at NXP's stock price over the past year (including the past few weeks), you can see how volatile it has been. 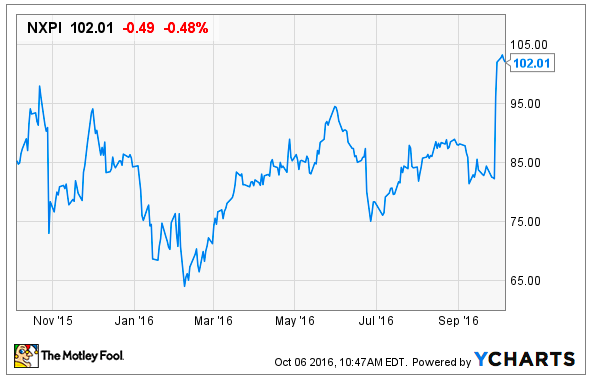 The high points have come in part as NXP has realized its potential in areas like near-field communication (NFC) and on the success of its $12 billion purchase of Freescale Semiconductor, but the drops have come from recent headwinds from rising costs. Bloomberg noted in its article that the semiconductor is both facing a shortage of customers and an increase of component costs at the same time.

NXP is relatively small compared to the other semiconductor companies, and Qualcomm may want to use its $30 billion in cash scoop up NXP.

Qualcomm may be interested in NXP's position in the automotive space. NXP's purchase of Freescale made it the leading supplier of semiconductors to the automotive market, with 14.5% market share. Additionally, NXP launched its BlueBox autonomous driving system back in May that is designed as an off-the-shelf system that allows carmakers to design, manufacture, and sell level 4 (full autonomy) self-driving cars by 2020.

The system comes with lidar, radar, and on-board vehicle-to-everything (V2X) communication sensors and is open-sourced so automakers can make their own adjustments to it.

The automotive semiconductor market was worth $29 billion in 2015, according to IHS, and IDC says the market will grow at a compound annual growth rate of 8% through 2020. And that, with its dominant position in the automotive space, makes NXP a valuable target right now.

It's impossible to predict NXP's future stock price, of course, but the recent uptick is likely to cool off at some point as investors get used the idea that the company may be purchased.

If a sale doesn't happen, though, I think investors are likely to experience some of the same volatility that NXP has experienced in the past. The company still has a while to go before the Freescale acquisition has been fully integrated into its current business.

While a deal may be on the horizon, NXP investors should factor in any purchase of the stock right now with the fact that the semiconductor space is getting increasingly competitive. Sales in the automotive space may help the company over the long term, but there's likely some short-term volatility ahead.